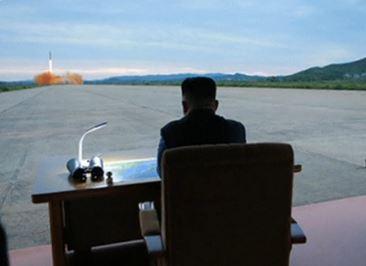 After an emergency meeting on the missile test, the U.N.'s most powerful body called North Korea's actions "outrageous," saying it was deliberately undermining peace and stability in the region. The council called for North Korea to take "immediate, concrete actions" to "reduce tensions in the Korean Peninsula and beyond."

The missile flight came less than a month after the council imposed its toughest-yet sanctions on North Korea, and it's not immediately clear whether any further actions could follow.

It is, however, clear that the United States wants new punitive measures against North Korea -- "something serious" -- and that President Trump is running out of patience with diplomatic efforts to cajole the Kim Jong Un regime.

"We'll be talking about next steps starting now," Japanese Ambassador Koro Bessho said after the Security Council meeting. For now, he said, the statement sends the North a strong message "that the international community will not accept its reckless behavior."

Going into the closed session that evolved into an open meeting, ambassadors from several countries said they wanted to discuss how to respond, but first of all to show that the international community was united in firmly rebuking the missile test. The missile -- designed to carry a nuclear payload -- traveled almost 1,700 miles into the Pacific and triggered alert warnings as it soared over northern Japan.

But as the intense discussions at the U.N. continue, President Trump signaled in an early Wednesday morning tweet that he was giving up on the diplomatic efforts, saying "talking is not the answer."

"What happened yesterday is absolutely unacceptable and irresponsible," she said, adding that the U.S. and its partners on the council would "talk about what else is left to do to North Korea."

"No country should have missiles flying over them like those 130 million people in Japan. It is unacceptable," Haley insisted. "They (North Korea) have violated every single UN Security Council Resolution that we've had. So I think something serious has to happen."

CBS News' Pamela Falk says that when Haley was asked what more could be done to try and prod Kim Jong Un to the negotiating table, the ambassador acknowledged that the U.S. has, "a lot to talk about today, and so, with all of our partners, what we hope is that China and Russia continue to work with us like they have in the past on North Korea."

And the Council discussion was a reminder that members have different approaches to the issue.

Chinese Ambassador Liu Jieyi called on all parties to "avoid any rhetoric or action that might exacerbate tension" on the Korean Peninsula.

Both he and his Russian counterpart noted their countries had previously proposed a suspension of both North Korean nuclear and missile development and of joint U.S.-South Korean military exercises, which are currently underway.

"The exercises being conducted must be scaled down," Russian Ambassador Vassily Nebenzia said. "There is an urgent need to create an atmosphere of trust among states in the region."

The Pyongyang news agency said Tuesday's missile launch was a "muscle-flexing" response to the war games, which the North views as rehearsals for an invasion. North Korea had requested a Security Council meeting about the exercises last week.

CBS News correspondent Ben Tracy reports that U.S. officials have confirmed neither the U.S. nor Japanese militaries attempted to shoot the missile down, given how high it was flying over Japan's northern island of Hokkaido.

The missile, a model North Korea calls its Hwasong-12 and the U.S. calls a KN-17, was the first one test-fired from its capital city, Pyongyang. Doing so makes a pre-emptive strike by the us more difficult, because it shows the North can put its missiles in unpredictable, and densely-populated, areas.

Tracy says that while Kim Jong Un has instructed his military to conduct more missile tests, he has also said North Korea will watch what the U.S. decides to do first, and will respond accordingly.

The U.S. says the decades-old military drills' only purpose is to improve readiness to defend South Korea and maintain stability on the Korean peninsula.

This year, the exercises come weeks after U.S. President Donald Trump warned he could unleash "fire and fury" if North Korea continued threatening the United States, and the North then said it was considering firing missiles into waters near the U.S. territory of Guam.

"Our commitment to the defense of our allies, including the Republic of Korea and Japan, in the face of these threats, remains ironclad. We remain prepared to defend ourselves and our allies from any attack or provocation," the statement said.

Reinforcing that readiness, the U.S. military announced early on Wednesday morning that it had conducted a successful "complex missile defense flight test," which saw interceptor missiles destroy a medium range missile fired from a U.S. test site in Hawaii.

Medium-range missiles, like the one used as a target in the MDA test, typically have a range of between 620 and 1,865 miles, whereas intermediate-range rockets, like the one North Korea just fired over Japan, can travel for up to 3,418 miles.

MDA Director Lt. Gen. Sam Greaves said his agency would, "continue developing ballistic missile defense technologies to stay ahead of the threat as it evolves."

The Security Council said Tuesday it was committed to a peaceful, diplomatic and political solution to the situation and called for strict implementation of its existing sanctions.

The latest sanctions include a ban on North Korean exports of coal, iron, lead and seafood products, together worth over $1 billion for a country with total exports valued at just $3 billion last year. The U.S. had suggested in July that the council could do more, including restricting oil to the North Korean military and boosting air and maritime restrictions.