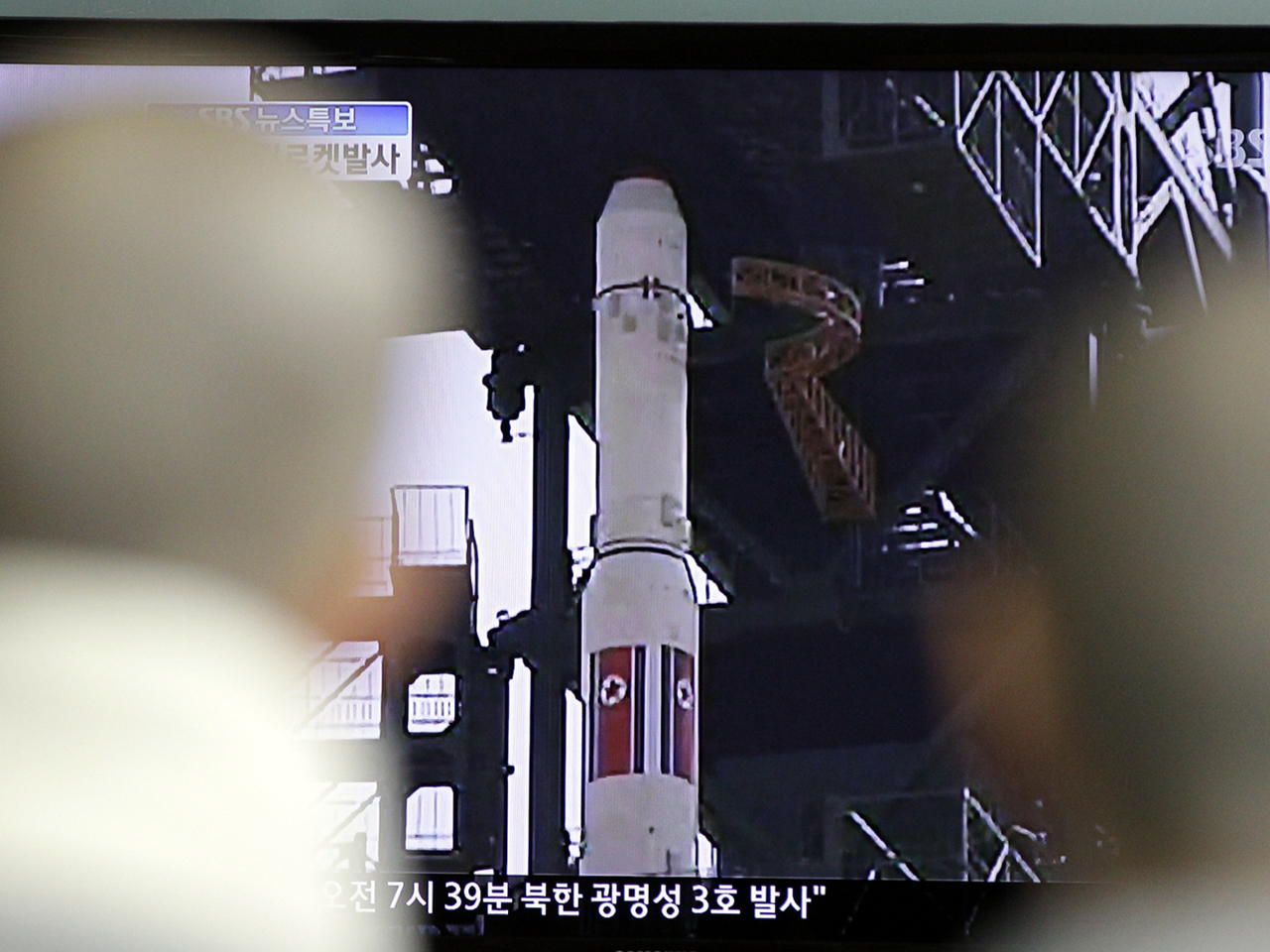 (CBS/AP) PYONGYANG, North Korea - North Korea's much-anticipated rocket launch ended quickly in an embarrassing failure early Friday, splintering into pieces over the Yellow Sea soon after takeoff and setting off an international search effort for the debris to gain insight into what went wrong and what rocket technology the country has.

Within minutes of the early morning launch, the U.S. and South Korea declared it a failure. North Korea acknowledged that hours later in an announcement broadcast on state TV, saying the satellite had failed to enter into orbit.

More U.S., Japanese and South Korean military assets were in place than ever before to monitor the launch, which was expected to provide vital data on North Korea's ballistic missile capabilities.

Two South Korean destroyers, equipped with missiles that could have shot the rocket down if necessary, began scouring the seas for debris from the rocket along with South Korean helicopters, CBS Radio News reporter Don Kirk reports from the South Korean capital of Seoul.

The Japanese government said self-defense teams were working with the U.S. military to analyze the rocket's flight route and any debris reclaimed from the failed rocket launch, CBS Radio News reporter Lucy Craft reports from Tokyo.

U.S. Navy minesweepers and other ships were in the area.

World leaders were swift to denounce the launch, calling it a covert test of missile technology and a flagrant violation of international resolutions prohibiting North Korea from developing its nuclear and missile programs.

An Obama administration official, speaking on condition of anonymity, dismissed the launch as a "propaganda effort," the failure of which "will have ramifications internally," CBS News White House correspondent Norah O'Donnell reports.

"This launch was also a chance for North Korea to showcase its military wares to prospective customers," the official said. "The failure will make those customers think twice before buying anything."

The leaders of the Group of Eight industrialized nations meeting in Washington, including Russia, condemned the launch. The U.N. Security Council, meanwhile, scheduled an emergency meeting for later Friday, and Washington said it was suspending plans to contribute food aid to the North in exchange for a rollback of its nuclear programs.

CBS News foreign affairs analyst Pamela Falk reports that the failed launch is unlikely to provoke more than a statement of alarm from the international body in the short term and perhaps more extensive sanctions in the long term.

"The North Korea rocket launch is a clear provocation and a violation of U.N. Security Council resolutions, which prohibit this activity," Kap-soo Rim, a South Korean diplomat to the United Nations, told CBS News. "The Security Council should act decisively and strongly."

North Korea had announced weeks earlier that scientists would launch a long-range rocket mounted with an observational satellite, touting it as a major technological achievement to mark the upcoming 100th anniversary of the birth of the country's founder, Kim Il Sung.

The United States, Russia, Japan and others urged North Korea to call off the launch. Experts say the Unha-3 carrier is the same type of rocket that would be used to strike the U.S. and other targets with a long-range missile.

North Korea has tested two atomic devices but is not believed to have mastered the technology needed to mount a nuclear warhead on a long-range missile.

Space officials in Pyongyang refused to back down, telling reporters earlier in the week that it is North Korea's "sovereign right" to develop its space program.

State media said the Kwangmyongsong-3 satellite was fired from the Sohae Satellite Launching Station in Tongchang-ri along the west coast at 7:38 a.m. Friday.

"The earth observation satellite failed to enter its preset orbit, the state-run Korean Central News Agency said. "Scientists, technicians and experts are now looking into the cause of the failure."

North Korean space officials said the Unha-3, or Galaxy-3, rocket was meant to send a satellite into orbit to study crops and weather patterns — its third bid to launch a satellite since 1998. Officials took foreign journalists to the west coast site to see the rocket and the Kwangmyongsong-3 satellite Sunday in a bid to show its transparency amid accusations of defiance.

The acknowledgment of the rocket's failure — both to the outside world and to North Koreans — was a surprising admission by a government that in the past has kept tight control over information. However, dozens of foreign journalists invited to cover the launch were not allowed to view the liftoff live.

North Korea had staked its pride on the satellite, seeing it as a show of strength amid persistent economic hardship while Kim Il Sung's young grandson, Kim Jong Un, solidifies power following the death of his father, longtime leader Kim Jong Il, four months ago.

"It blows a big hole in the birthday party," said Victor Cha, who was an Asia adviser for former President George W. Bush. "It's terribly embarrassing for the North."

He said the next step would be to watch whether North Korea conducts a nuclear test, as has been speculated by the South Korean intelligence community. North Korea reportedly is making preparations for such a test.

"We have to watch very carefully what they are doing now at the nuclear test site and how they explain this with all those foreign journalists in the country," Cha said.

Attempts to put satellites into orbit often pose problems even for developed nations. In 2010, a South Korean rocket carrying a climate observation satellite exploded 137 seconds into its flight. An earlier 2009 attempt, Seoul's first from its own territory, also failed.

Greg Thielmann, a senior fellow at the Arms Control Association and a former intelligence officer with the U.S. State Department, said the failure suggests North Korea still hasn't mastered the technology it needs to control its multistage rockets — a key capability the North will need if it is to threaten the United States with intercontinental ballistic missiles.

"They had a spectacular failure with a launch in 2006, the only one that they explicitly called a missile," he said. That rocket exploded in midair about 40 seconds after liftoff.

But he said it was a good thing the rocket didn't stray into Japanese or South Korean territory.

U.S. Secretary of State Hillary Rodham Clinton, speaking for the Group of Eight, said earlier that all the members of the bloc agreed to be prepared to take further action against North Korea in the Security Council.

"Pyongyang has a clear choice: It can pursue peace and reap the benefits of closer ties with the international community, including the United States; or it can continue to face pressure and isolation," Clinton said Thursday.