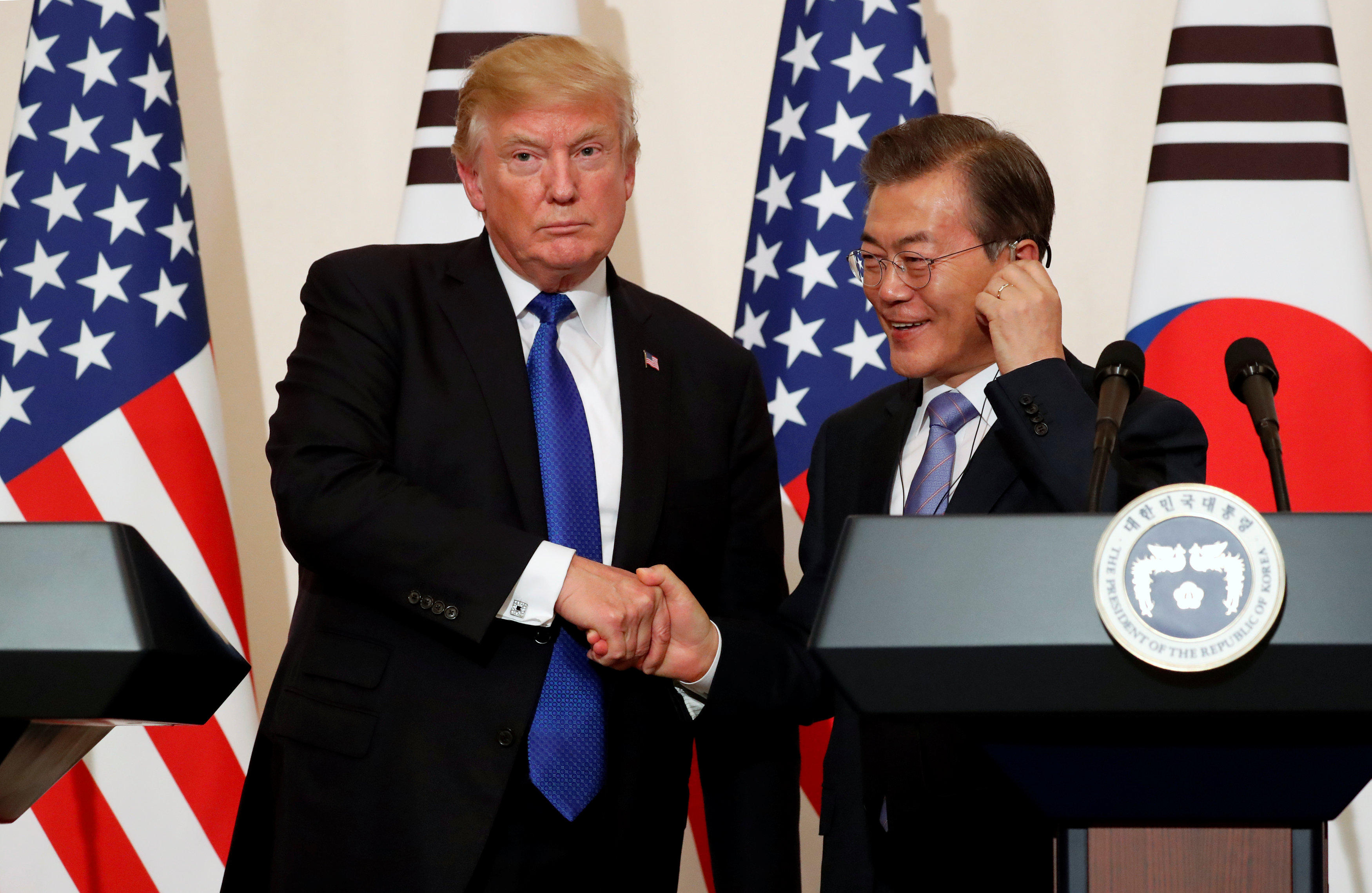 SEOUL, South Korea -- President Donald Trump projected optimism ahead of talks with South Korea's leader Tuesday, as he kicked off a two-day visit centered on pressuring the North to abandon its nuclear weapons program.

Mr. Trump arrived at the Blue House in Seoul after visiting Camp Humphreys, a military base about 40 miles away. After a formal welcome ceremony, he said he looked forward to a "successful day of talks."

South Korea has been warily watching Mr. Trump, who has repeatedly struck a hard line against Pyongyang. In his welcoming remarks, South Korea's President Moon Jae-in said he hoped the visit "will serve as an opportunity to relieve some of the anxiety that the Korean people have due to North Korea's provocations and also serve as a turning point in resolving the North Korean nuclear issue."

Speaking before an operational briefing at the base, which is only about 60 miles from the border with North Korea, Mr. Trump briefly addressed the interlocking issues of security and trade at the heart of his visit. He said he would be meeting with generals about North Korea, declaring: "Ultimately it will all work out. Because it always works out. It has to work out.

U.S. and South Korean officials have said the base visit was meant to underscore the countries' ties and South Korea's commitment to contributing to its own defense. Burden-sharing is a theme Mr. Trump has stressed ever since his presidential campaign.

South Korea is the second stop on Mr. Trump's five country Asian tour. In Japan, he refused to rule out eventual military action against the north and exhorted dictator Kim Jong Un to stop weapons testing, calling the recent launches of missiles over American allies like Japan "a threat to the civilized world and international peace and stability."

Later Tuesday, at a joint news conference with President Moon, Mr. Trump was asked by CBS News correspondent Margaret Brennan whether -- given his optimistic remarks earlier in the day -- he still believed diplomacy was a waste of time in dealing with the North, as he said in October.

Mr. Trump first said he would prefer to play his cards "close to the vest," but then said "good progress" was being made in the efforts to apply pressure to North Korea, and he urged Pyongyang to "come to the table" and "make a deal."

"It makes sense for North Korea to do the right thing," said Mr. Trump.

The president did not offer specifics on how progress is being made, but he briefly touched on the diplomatic efforts to pressure North Korea back to the negotiating table, saying China had been "very helpful." He qualified that praise, however, by saying he would seek to confirm the level of Beijing's support during his visit to China later this week.

Mr. Trump was less enthusiastic about Russia's stance on North Korea, saying he would wait and see how helpful Moscow was really being.

He also reiterated remarks made in Japan, saying South Korea would be "ordering billions of dollars" of U.S. military hardware to enable the country to defend itself from any attack by the North. "We've already approved some of those orders," he said.

Mr.Trump is skipping the customary trip to the demilitarized zone separating north and south -- a pilgrimage made by every U.S. president except one since Ronald Reagan as a demonstration of solidarity with the South. A senior administration recently dubbed the border trip as "a bit of a cliche" and several other members of the administration, including Vice President Mike Pence, have visited the DMZ this year. And the White House believes that Mr. Trump has already made his support of South Korea crystal clear.

Mr. Trump and Moon agree on the need to pressure the North with sanctions and other deterrence measures. But Mr. Trump has warned of unleashing "fire and fury," threatened to "totally destroy" the North, if necessary, and repeatedly insisted that all options are on the table. Moon, meanwhile, favors dialogue as the best strategy for defusing the nuclear tension and vehemently opposes a potential military clash that could cause enormous casualties in South Korea.

Mr. Trump backed up his strong words about North Korea by sending a budget request to Capitol Hill on Monday for $4 billion to support "additional efforts to detect, defeat, and defend against any North Korean use of ballistic missiles against the United States, its deployed forces, allies, or partners."

And as he departed for South Korea, he tweeted that Moon is "a fine gentleman," adding, "We will figure it all out!"

On a personal level, Mr. Trump and Moon have not developed the same close rapport as Mr. Trump has with Abe or even China's Xi Jinping. Part of Moon's mission during the visit will likely be to strengthen his personal ties with Mr. Trump, said Michael O'Hanlon, a senior fellow in foreign policy at the Brookings Institution.

"Now poor President Moon is playing catch-up ball because everyone acknowledges that he's not bonding quite as much with Donald Trump as the rest of the region," said O'Hanlon. He said Moon could face pressure "to deliver a stronger relationship" whereas "in most other parts of the world, people are trying to keep their distance from Donald Trump."

Mr. Trump will spend Tuesday in meetings with Moon, hold a joint press conference and be feted at a state dinner.

Trade also is expected to be a major topic of discussion: Mr. Trump has considered pulling out of the United States-Korea Free Trade Agreement, also known as KORUS, blaming it for the U.S.-South Korea trade deficit.