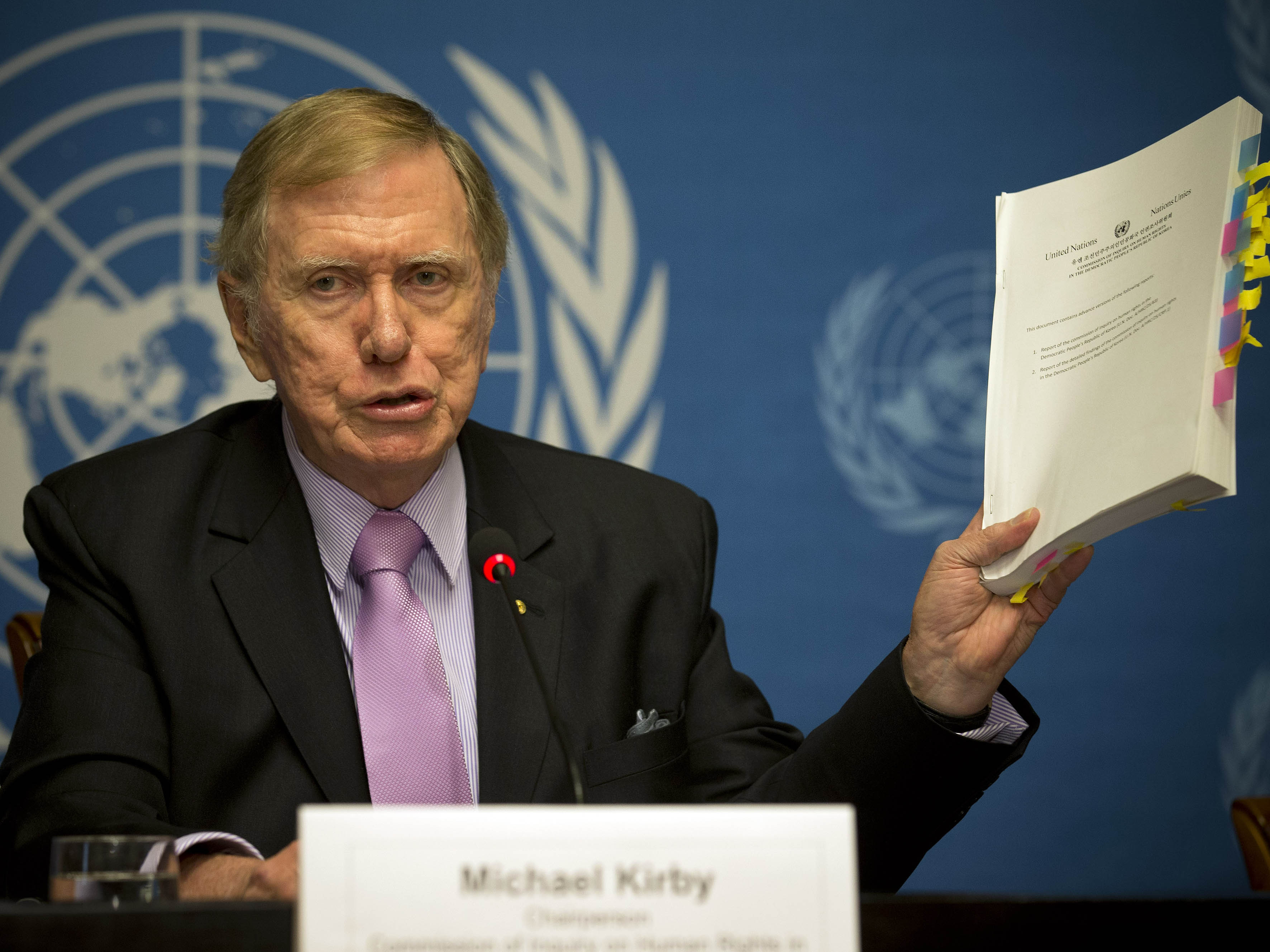 On Monday, United Nations investigators in Geneva released the most detailed report ever published that concludes that North Korean officials have committed crimes against humanity and calls for justice for “unspeakable atrocities” against women men, children and even infants throughout the country.

And, in a break from usual U.N. caution and diplomacy, the U.N. panel put North Korea’s Supreme Leader Kim Jong Un on notice that he could be held responsible.

A flurry of diplomatic activity has followed.

Although the U.N. has known about alleged human rights violations in North Korea for many years, the grim report by an independent commission created by the Human Rights Council details alleged crimes committed against opponents of the Kim’s regime, including torture, infanticide, summary executions, forced abortions, enslavement, starvation and persecution based on political, religious, racial and gender grounds.

In a letter, published in an annex of the 372-page report dated Jan. 20, the chairman of the U.N. panel Michael Kirby, wrote to Kim : “The Commission has found that systematic, widespread and gross human rights violations have been, and are being, committed by the Democratic People’s Republic of Korea, its institutions and officials.” He then goes on to say, “any official of the Democratic People’s Republic Korea who commits, orders, solicits or aids and abets crimes against humanity incurs criminal responsibility by international law and must be held accountable under that law.”

And, in the press conference in Geneva, Mr. Kirby went a step further, saying that the letter written to North Korea’s supreme leader made it clear that he, himself, could be held responsible. The panel report said, “the Commission drew to the Supreme Leader’s attention the principles of command and superior responsibility under international criminal law, according to which military commanders and civilian superiors can incur personal criminal responsibility for failing to prevent and repress crimes against humanity committed by persons under their effective control.”

The U.N. report on North Korea calls for justice for the grave violations of human rights and recommends that North Korea be referred to the International Criminal Court, although the likelihood of the Security Council referring the case of North Korea is dim because of Chinese opposition and because North Korea is not a state party to the Rome Statute, which establishes the court.

China’s Foreign Ministry spokeswoman Hua Chunying, commenting on the report, put to rest that a referral to the ICC would get through the U.N. Security Council without a veto: “China maintains that differences in human rights should be handled through constructive dialogue and cooperation on the basis of equality and mutual respect. To bring human right issues to the International Criminal Court does not help improve a country's human rights conditions.”

And, she said, China’s Vice Foreign Minister Liu Zhenmin will pay a visit to the DPRK from Monday through Thursday this week.

“What is important now is for the international community to react; there are other options for criminal investigations if there is no ICC referral,” she said.

Kirby, the U.N. panel chair, said that the suffering of the people of North Korea requires action and concluded by saying evidence evokes memories of the horror and the shame and the shock of the crimes during World War II, “We must not fail to speak. However painful, we must speak.”

The context of the report is that technology, including satellite imagery, in the past few years has increased what the international community knows about the expanding prison camps in North Korea, which house, according to experts, between 80,000  and 120,000 prisoners.

The U.N. report on the magnitude of North Korea’s human rights violations comes at a time of mixed messages from the Kim regime: North Korea has been increasing its nuclear capability and its ability to deliver a nuclear weapon, but has agreed to meet with South Korea on family reunification despite its objections to U.S.–South Korean military exercises in the region.

Without success, the Obama administration has pressed for the release of Kenneth Bae, an American who has been held in a North Korean prison since 2012.

The U.N. report also comes at a time when the Obama administration is eager rekindle its focus on Asia. Secretary of State John Kerry traveled just visited China with the intention of enlisting China’s president to persuade the North Korean leader to give up its nuclear weapons development. And President Obama travels to South Korea in April.

There are concerns that added pressure on the North Korean regime from this U.N. report could make any dealings with the isolated, often belligerent nation even more difficult.

"Make way for the law of unintended consequences," one veteran North Korea analyst told CBS News on Monday. "Dealing diplomatically with a regime condemned for crimes against humanity will be even harder than it is now. Some will see that as a good thing, of course, but anyone hoping to get at the North's WMD programs will find the way ahead much more difficult.  Why should the regime in Pyongyang even think about compromise at this point when they have clear proof that there are people out there howling for their heads?"

The analyst, who asked not to be identified due to the sensitive subject matter, told CBS News that the North could use the U.N. report as fodder for its portrayal of ongoing U.S.-South Korean military exercises as an effort to overthrow regime.

"When the North Koreans think they are being pushed in a corner, they don't roll over and play dead," said the analyst. "They can be very good at figuring out tactical moves that put us off balance. ... That could make things ugly."

The U.N. panel heard firsthand testimony of the alleged horrors, including that of a woman forced to drown her own baby and stories of children being imprisoned from birth, and systematic starvation of civilians.

The report concludes that systematic, widespread and gross human rights violations have been and are still being committed in North Korea.

Although the U.N. investigative panel was not allowed access in North Korea, the panel of jurists from Australia, Indonesia and Serbia held public hearings of victims and experts in Tokyo, London, San Francisco and Seoul, South Korea.

In response to the report, the Geneva office of North Korea issued a statement rejecting the report, saying that human rights violations mentioned within do not exist in North Korea. Last month, Ambassador Sin Son Ho, permanent representative of North Korea to the United Nations, told reporters: "If the South Korean authorities have a true intent for improving the North-South relations, they should definitely end the vicious cycle of slandering and hatred that are a hamper to all, and listen to the voices of fellow countrymen calling for reconciliation of the nation."

Asked by CBS News if the North Koreans are likely to pay any mind to the U.N. report, South Korea's Ambassador to the U.N., Oh Joon said, " I hope they will. This is by far the most comprehensive and thorough report ever written on the human rights situation in North Korea."

Ambassador Oh added, "As it has the effect of bringing the issue to the forefront of global human rights concerns, North Korea will have to answer the questions raised in the report in the years to come, even if they reject it right now. Eventually it will be in the interest of North Korea themselves to pay heed and address the concerns."