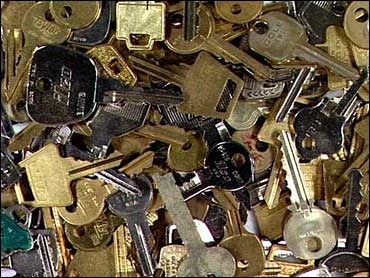 WILLISTON, N.D. -- A North Dakota man is facing 35 felony counts after allegedly stealing from four companies and more than a dozen people.

Sean Haskins, of Williston, is accused of theft, burglary and possession of stolen property, along with drug and weapons charges.

Authorities say Haskins had once worked for two of the companies targeted in the burglaries.

Police say Haskins was in possession of a stolen Ford Excursion when he was arrested, and that they also recovered a Chevrolet Colorado that Haskins was seen taking from a former employer, on surveillance video.

During a search, police say they found firearms, thousands of dollars' worth of stolen items and keys for nine different vehicles.

Police also found 38 garage door openers reported stolen Nov. 3 from an apartment complex where Haskins worked, 200 keys to deadbolts and mailboxes, and "master keys" to the facility and to a key-making machine, according to an affidavit.

Haskins' bail was set at $250,000, the Williston Herald reports. He could enter pleas at a Jan. 21 hearing. Each of the felony charges carries a maximum sentence of five years in prison.