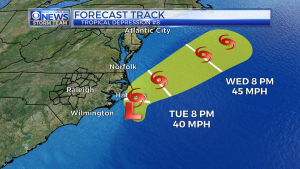 RODANTHE, N.C. -- Crowds thinned Tuesday on the beaches of North Carolina’s Outer Banks ahead of a tropical weather system that threatened to bring strong winds and heavy rains that could flood low-lying areas.

Elsewhere, a powerful hurricanethreatened to pass “dangerously close” to Hawaiiand another tropical depression churned in Gulf of Mexico waters with the potential to bring rain and wind to Florida.

On North Carolina’s Hatteras Island, a slow stream of dozens of cars from places including Maryland, New York and Ohio headed toward a bridge to the mainland. There was light, intermittent rain and a mostly cloudy sky.

A public beach near Rodanthe was nearly empty, save for two parents enjoying a walk with their 11-year-old son. Nearby, large waves crashed in the increasingly angry-looking surf.

Joe and Kelley Walker of Markham, Virginia, plan to wait out the rain with movies or card games unless the forecast worsens.

“We’re not worried about the storm so much unless they say there’s something to worry about,” Joe Walker said.

The tropical weather system off the coast was expected to strengthen and pass near the Outer Banks by late Tuesday, bringing sustained winds as high as 45 mph and heavy rains of up to 5 inches in some areas.

An 11 a.m. update from the National Hurricane Center said the tropical depression could become a named storm later in the day. Forecasters have said it’s not expected to surpass tropical-storm strength.

With the storm centered about 70 miles south of Cape Hatteras, a tropical storm warning was in effect for much of the Outer Banks.

Coastal Carteret County emergency officials issued an advisory on Tuesday saying that wind problems were likely to be “mostly minor,” but that residents should prepare in case trees topple, limbs snap or lightweight objects are blow around.

At the same time, the National Hurricane Center said that another tropical depression in the Gulf of Mexico could hit northern Florida as a tropical storm later in the week and possibly head toward the Atlantic coast.

That depression was about 340 miles (550 kilometers) west of Key West, Florida. Forecasters expect it to become a tropical storm later Tuesday and turn northeast toward Florida the next day

National Weather Service meteorologist Tom Lonka said the center of the storm approaching North Carolina should stay offshore as it passes, but it will hit the Outer Banks with bands of rain and wind through Wednesday.

“They’ll be rain showers coming on shore, rain bands and gusty winds,” he said by phone Tuesday. “The biggest impacts will be relegated to the beaches, the waters, high surf, maybe some erosion.”

Lonka said the storm in the Gulf was forecast to move across northern Florida later this week toward the Atlantic Ocean, but likely to stay south of North Carolina. Still, he cautioned that it’s difficult to predict a storm’s path days in advance.

Outer Banks business owners were keeping an eye on both storms because of fears that a one-two punch of rain could saturate the ground and cause problems. Roads along the thin barrier islands are prone to flooding and damage from erosion, including the two-lane N.C. Highway 12 that is the area’s main north-south artery.

Meanwhile, the Central Pacific Hurricane Center issued a hurricane watch for the Big Island of Hawaii, saying Hurricane Madeline could pass “dangerously close.” The storm should be near or over the Big Island by Wednesday.

Elsewhere, another Category 3 hurricane named Lester - also with top sustained winds of 120 mph (195 kph) - was about 1,355 miles (2,180 kilometers) east of Hilo, Hawaii and moving west over the Pacific at 14 mph (22 kph). No coastal watches or warnings were in effect for that storm.

CBS affiliate KGMB reports that the two storms are approaching the islands as President Barack Obama prepares to visit Oahu for a high-profile conservation conference.