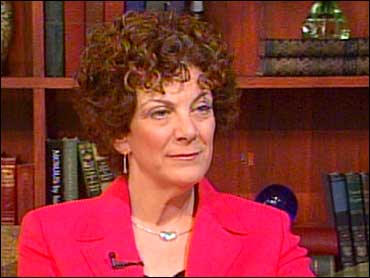 To spank or not to spank? That is the question millions of parents consider when dealing with misbehaving children.

While many experts agree that spanking is not an effective way to discipline kids, many parents find it hard to avoid losing their own tempers when one of their little ones goes off on their own.

Barbara Unell, co-author of "Discipline Without Shouting Or Spanking," tells The Early Show co-anchor Harry Smith the key is to teach kids what appropriate behavior is.

"Spanking doesn't teach," Unell says. "The idea of spanking is it drives behavior underground. What you do is, you have to avoid the person who spanks instead of avoiding the behavior. You go, 'All right, I'm not going to run into the street because mom is going to give me a spanking, right? But if mom is not around, I'll run into the street.' Teach them not to run in the street."

The founder of the school-based character-education program "Kindness Is Contagious...Catch It!" uses a timer as one of her techniques to teach children.

She explains, "It's a great tool, because it takes you away from being the person that's the big, bad authority. It takes the timer to set the rule. You set the timer for 30 minutes. You say, 'When the timer goes off, it's time to go to bed.' The kid is, 'All right, great.' The kid is playing, taking a shower, whatever the kid is doing."

If, at the end of the 30 minutes, the kid doesn't want to do what you asked to be done, Unell says parents can say, "'I'm so sorry you didn't beat the timer but maybe tomorrow we'll do it.' The idea is that you stay calm. There's no reason to get upset."

The book includes the 37 most common behavior problems for children ages 1 to 5, including sibling rivalry, talking back, dawdling, lying, name calling, whining, and "hyper" activity.

Read an excerpt about dealing with your child's temper tantrums.

Millions of normal, lovable preschoolers throw temper tantrums as their way of coping with frustration or anger, or of telling the world they're the boss. Tantrums can become less frequent and even be prevented by not giving the performer an audience and by not giving in to his demands. Though you may want to give in or crawl under the nearest checkout counter when your child throws a tantrum in public, be patient until he's finished and praise his gaining control after he's calm.

Note: Common, periodic crying is not a temper tantrum and needs to be treated differently. Get professional help if your child has more than two to three temper tantrums per day.

Teach your child how to handle frustration and anger.

Show your child how adults like you can find other ways of coping besides yelling and screaming. When you burn the casserole, for instance, instead of throwing the burned pot into the garbage, say, "I'm upset now, honey, but I can handle it. I'm going to figure out how to solve this mess by seeing what else I can fix for dinner." Regardless of the situation, teach your child to look at the choices he has to solve his problems instead of getting violent about them.

Catch your child being good. For example, praise his asking you to help him put together a complicated puzzle that might otherwise frustrate him. Say, "I'm so glad you asked for my help instead of getting mad at the puzzle." Helping your child handle his frustration and anger calmly helps him feel good about himself. You'll find him repeating a problem-solving technique when he knows he'll get praised for it. Tell him you understand his frustration by saying, "I know how you feel when things get tough, and I'm really proud of you for being able to solve the problem calmly."

Pay attention to your child when he's playing appropriately with his toys, so he doesn't have to resort to inappropriate play to get your attention.

Don't wait for an invitation.

If you spot trouble brewing in your child's play or eating activities, don't let it simmer too long. When you see that the situation is difficult or frustrating for him, say, "I bet this puzzle piece goes here," or, "Let's do it this way." Show him how to work the toy or eat the food, and then let him complete the task so he feels good about his ability to let others help.

Do nothing for, with, or to your child during his performance. Teach him that a temper tantrum is not the way to get your attention or get his demands met. But how do you ignore a tornado tearing through your living room? Walk away from him during his tantrum, turn your back on him, put him in his room, or isolate yourself. If he's being destructive or dangerous to himself or others in public, put him in a confined place where he's safe. Don't even look his way during this isolation. Though it's tough to turn away, try to busy yourself in another room of the house or with another activity in public.

Despite the power of your child's screaming and pounding, make sure you maintain self-control by holding tight to your rule. Tell yourself silently that it's important for your child to learn that he can't have everything he wants when he wants it. Your child is learning to be realistic, and you're learning to be consistent and to give him boundaries for acceptable and unacceptable behavior.

Remain as calm as you can.

Say to yourself, "This is not a big deal. If I can stay in control of myself, I can better teach my child to control himself. He's just trying to upset me so he can have what he wants." Keeping calm while ignoring his tantrum is the best model for him when he's upset.

After the fire of a temper tantrum is reduced to smoldering ashes, immediately praise your child for regaining self-control, and get both of you involved in a favorite game or activity that isn't frustrating for him or you. Say, "I'm glad you're feeling better now. I love you, but I don't like screaming or yelling." Since this is your only reference to the tantrum, it will help him know that it was the tantrum you were ignoring, not him.

If you and your child are at the store and he asks you to buy a toy that was off-limits before, you can change your mind—but change your message, too. Say, "Remember when we were here before and you threw a tantrum? When you behave nicely by staying close to me, I've decided that you can have the toy." This will help him understand that it wasn't the tantrum that changed your mind; you're buying the toy for another reason. If you like, tell him why you've changed your mind, particularly if it includes praise for his good behavior.

What Not to Do

Don't reason or explain during the tantrum.

Trying to reason your child out of his tantrum during the tantrum is wasted breath. He doesn't care. He's in the middle of a show and he's the star. Any discussion at this time only encourages the tantrum, because it gives him the audience he wants.

Don't throw a tantrum yourself.

Say to yourself, "Why do I need to act crazy? I know that when I said no, I said it for a reason." Losing your cool only encourages your child to keep the heat on, and it shows him that he doesn't need to learn self-control.

Just because your child has a temper tantrum doesn't mean he's a bad person. Don't say, "Bad boy! Aren't you ashamed of yourself?" Your child will lose respect for himself and feel that he didn't deserve what he wanted anyway.

Don't be a historian.

Don't remind your child of his tantrum later that day. This only gives more attention to the behavior and increases the chances of his having another tantrum, just to be the center of your conversation.

Don't make your child pay for the tantrum.

Having nothing to do with him after it's over will only cause him to have more tantrums to try to get your attention. Don't send him the message that he's unloved and unwanted just because his behavior was.

© 2002 by Jerry Wyckoff and Barbara Unell, reprinted with permission of Meadowbrook Press.