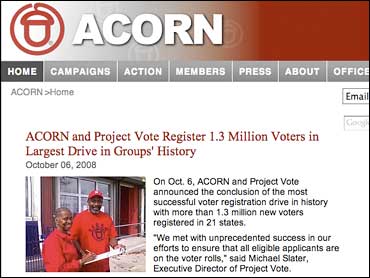 The Las Vegas headquarters of the nation's largest grassroots community organization for low-income people was raided today by Nevada state authorities as part of a voter-fraud probe.

The raid was initiated by Nevada's Secretary of State, Ross Miller, after a series of accusations that the Association of Community Organizations for Reform Now, also known as ACORN, was submitting voter registration lists to the state that contained false or duplicate names of voters.

"When we got [to the headquarters], no one was there so, there were no arrests," Secretary of State spokesman Bob Walsh told CBS News. But, he added "agents did seize lots of records."

CBS News has learned that the state's investigation is focusing on the conduct of ACORN's work force. Critics allege that ACORN hires workers "off the street" to sign up new voters, paying them by the number of voters registered - sometimes resulting in false and duplicate names. But an ACORN spokesman dismisses this allegation and told CBS News that workers are paid "by the hour" and "not by the number of people they sign up."

In an official statement, ACORN Interim Chief Organizer, Bertha Lewis, called today's raid "a stunt" and said it "serves no useful purpose other than discredit our work registering Nevadans and distracting us from the important work ahead of getting every eligible voter to the polls." Lewis says any time ACORN "identified a potentially fraudulent application" they notified election officials. But, Lewis claims Nevada election officials "routinely ignored" ACORN's concerns and "failed to act."

The raid comes two months after state and federal officials formed a task force to go after election-fraud allegations. Earlier this year, U.S. Attorney General Michael Mukasey issued a memo to all Justice Department employees telling them in no uncertain terms that "politics must play no role in our efforts."

ACORN has been around since the 1970's and has offices nationwide to assist low-income people with a number of issues. Part of the organization's mission is to help low-income Americans, minorities, and youth, who are "historically disenfranchised" from voting register for elections. ACORN's website says they "helped more than 1.68 million citizens register to vote" for the 2004 and 2006 elections. And just yesterday, ACORN announced it had conducted its "largest and most comprehensive" voter drive for the upcoming presidential election helping "over 1.3 million Americans register to vote."