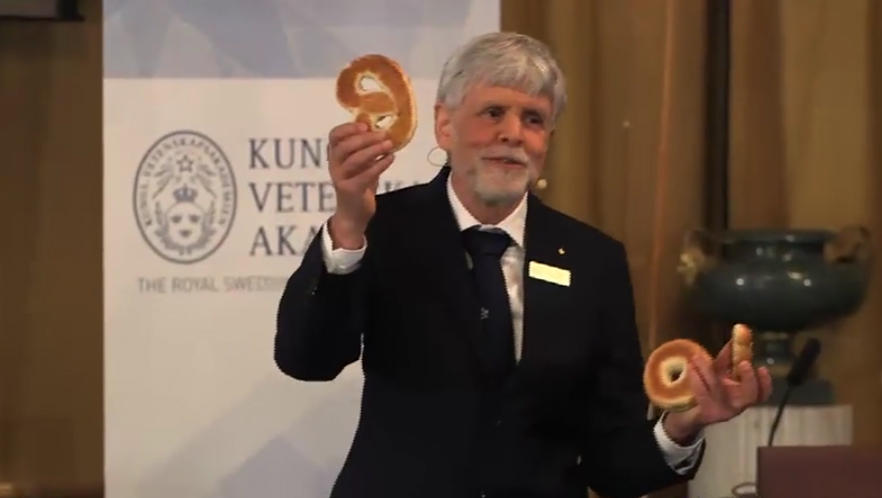 STOCKHOLM  Three British-born scientists won the Nobel Prize in physics on Tuesday for discoveries about strange states of matter that could result in improved materials for electronics or quantum computers.

David Thouless, Duncan Haldane and Michael Kosterlitz, who are now affiliated with universities in the United States, were honored for breakthroughs they made in the 1970s and ‘80s.

The Royal Swedish Academy of Sciences said their work opened the door to a previously unknown world where matter can assume unusual states or phases.

“Their discoveries have brought about breakthroughs in the theoretical understanding of matter’s mysteries and created new perspectives on the development of innovative materials,” the academy said.

The 8 million kronor ($930,000) award was divided with one half going to Thouless and the other to Haldane and Kosterlitz for “theoretical discoveries of topological phase transitions and topological phases of matter.”

Topology is a branch of mathematics that describes properties of objects.

The judges said that there is now hope that “topological materials will be useful for new generations of electronics and superconductors or in future quantum computers.”

Nobel judges often award discoveries made decades ago to make sure they withstand the test of time.

Speaking by a phone link to a news conference in Stockholm, Haldane said he was “very surprised and very gratified” by the award, adding the laureates stumbled onto the discoveries.

“Most of the big discoveries are really that way,” he said. “At least in theoretical things, you never set out to discover something new. You stumble on it and you have the luck to recognize what you’ve found is something very interesting.”

Kosterlitz, a dual U.K.-U.S. citizen, said he got the news in a parking garage while heading to lunch in Helsinki.

“I’m a little bit dazzled. I’m still trying to take it in,” he told The Associated Press.

While most people are familiar with objects in three dimensions, the Nobel laureates analyzed materials so thin they have only two dimensions, or even one.

Scientists had once been skeptical that any interesting atomic-scale behavior takes place in these settings, but the Nobel laureates proved them wrong, said Phillip Schewe, a physicist and writer at the University of Maryland in College Park.

For example, Kosterlitz and Thouless showed that, against expectations, two-dimensional materials could conduct electricity without any loss to resistance. That property is called superconductivity.

Kosterlitz said he was in his 20s at the time and that his “complete ignorance” was an advantage in challenging the established science.

“I didn’t have any preconceived ideas,” he said. “I was young and stupid enough to take it on.”

Their analysis relied on topology, which is the mathematical study of properties that don’t change when objects are distorted. A doughnut and a coffee cup are equivalent topologically because they each have exactly one hole. In topology, properties change only in whole steps; you can’t have half a hole.

Prize committee member Thors Hans Hansson explained the concept by holding up a cinnamon bun, a bagel and a pretzel with two holes in it to reporters in Stockholm. (See his demo starting at 4:45 in the YouTube video of the announcement, below.)

Holding up the three pastries, Hansson said that in topology “there is only one thing that is really interesting with these things, in which they differ” -- not their shape, size, stickiness or flavor, but the number of holes in each one: none for the cinnamon bun, one for the bagel, and two in the pretzel. “The number of holes is what a topologist would call a topological invariant,” he explained.

Because of its stability, it takes something drastic to change that number, he noted, while tearing a chunk off the pretzel: “I have to break it apart.”

Thouless was able to explain an experiment conducted with a very thin layer of material. Its electrical resistance varied in response to changes in a magnetic field, but while the strength of the field was changed smoothly, the resistance changed in sharply defined steps. This effect is so precise that it is now used to define the unit of electrical resistance, the ohm.

Nobel committee member David Haviland said this year’s prize was more about theoretical discoveries even though they may result in practical applications.

“Topology is a very abstract branch of mathematics which isn’t used so frequently in physics,” Haviland said. “But these theoreticians have come up with a description of these materials using topological ideas, which have proven very fruitful and has led to a lot of ongoing research about material properties.”

This year’s Nobel Prize announcements started Monday with the medicine award going to Japanese biologist Yoshinori Ohsumi for discoveries on autophagy, the process by which a cell breaks down and recycles content.

Besides the prize money, the winners get a medal and a diploma at the award ceremonies on Dec. 10, the anniversary of prize founder Alfred Nobel’s death in 1896.