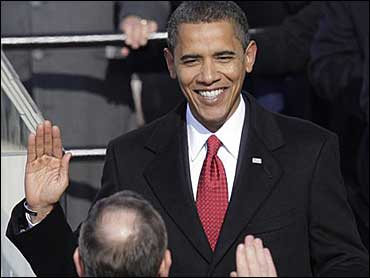 When President Obama asked Vice President Biden to administer the oath of office to a number of White House staffers this afternoon, Biden asked for a copy of the oath, saying, "My memory is not as good as Justice Roberts."

It was a bit of sarcasm directed at the Chief Justice, who misstated the words of the presidential oath while administering it yesterday at the Inauguration.

White House press secretary Robert Gibbs says there are no plans for the president to retake the oath, despite not saying it exactly as stated in Article 2, Section 1 of the Constitution at his inauguration yesterday.

"He should probably go ahead and take the oath again," George Washington law professor Jonathan Turley told the Washington Post. "If he doesn't, there are going to be people who for the next four years are going to argue that he didn't meet the constitutional standard. I don't think it's necessary, and it's not a constitutional crisis. This is the chief justice's version of a wardrobe malfunction."

But Gibbs tells CBS News that "no one has suggested" a do-over on the oath.

As for Biden's crack, it brought laughter and then groans from the audience of staffers in the Eisenhower Executive Office Building.