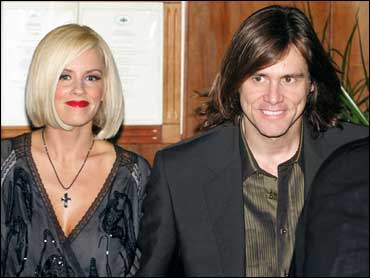 Jim Carrey says he and his lady love, Jenny McCarthy, aren't planning to get married.

Will he get her a ring at least?

"I bought her a Chloe purse," he jokes. "Isn't that good enough?"

Carrey and McCarthy, 34, went public with their romance last year. "She's just a wonderful lady and much deeper than she's ever received credit for, and I'm very excited about her future," he says of the former Playboy playmate, who got her big break in the mid-'90s as a co-host on MTV's "Singled Out."

Carrey, who was previously married to actress Lauren Holly, has a 19-year-old daughter, Jane, with his first wife, Melissa Womer. McCarthy and film director John Asher filed for divorce in August 2005, after six years of marriage. They have a 4-year-old son, Evan.

When asked whether their relationship would have worked years ago, Carrey says, "No, not at all. I went through a lot of relationships that I believe were meant to define what I don't want in another person and in myself, and it refocused me on what I do want."

Carrey stars in the New Line drama "The Number 23," slated for release Feb. 23. He rose to fame in the TV show "In Living Color" and the film comedies "Ace Ventura" and "The Mask," but has since dabbled in more serious stuff such as 2004's "Eternal Sunshine of the Spotless Mind."

McCarthy has appeared in the films "John Tucker Must Die" and "Scary Movie 3," and starred in the short-lived 2005 UPN sitcom, "The Bad Girl's Guide." Her books about pregnancy and motherhood, "Belly Laughs" and "Baby Laughs," were on the New York Times best-seller list.