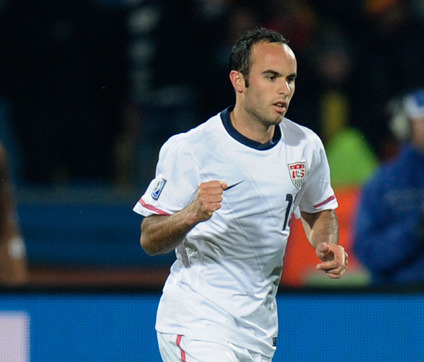 NEW YORK (CBS) Contrary to recent reports, Landon Donovan will not be a father any time soon.

The U.S. soccer star firmly denied that he fathered a child with a British woman.

"I will not be a dad any time soon, which is good news for me," Donovan, 28, told E! Online at the ESPY awards in Los Angeles.

The paternity scandal arose a day after Ghana booted the U.S. from the 2010 World Cup tournament.

Sports Illustrated first reported that a British tabloid was set to run a story that claimed Donovan fathered a love child while he was playing on loan for the English Premier League club Everton in the winter of 2009.

The U.S. midfielder, who is separated from his wife, actress Bianca Kajlich, initially didn't deny the report and instead told the magazine, "I was informed of the possibility during the World Cup, and if I need to take responsibility, then I will provide the appropriate support. This is a private matter and I will refrain from further comment at this time."

Although Donovan and Kajlich have been separated for nearly a year, the two have been trying to repair their relationship and were recently spotted arm-in-arm while on the red carpet Wedensday.