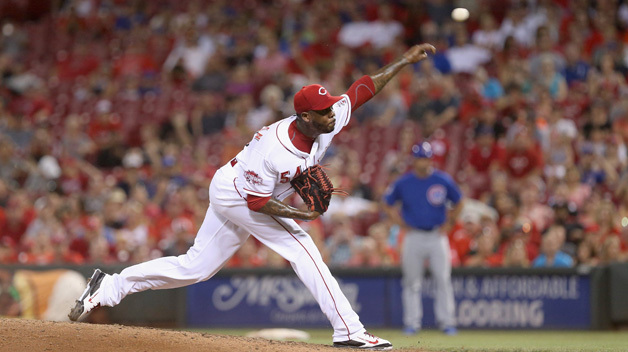 MIAMI -- Police said there was "insufficient evidence" to charge Cincinnati Reds closer Aroldis Chapman in a domestic disturbance involving the pitcher and his girlfriend at his South Florida home, and they've closed the investigation.

But the matter appears to have put on hold a proposed trade sending Chapman to the Los Angeles Dodgers. Joe Torre, MLB's chief baseball officer, said Tuesday that there is no timetable for making a decision on Chapman's status under the league's new domestic violence policy. He said the league first learned of the incident late Monday.

The Davie, Florida, Police Department released its report on the Oct. 30 incident Tuesday. It cites conflicting stories and a lack of cooperating witnesses and says there were no physical injuries.

According to the report, police arrived at the home in the Fort Lauderdale suburb after getting a call about a domestic incident. They spoke to Cristina Barnea, 22, who told officers that Chapman pushed her, put his hands around her neck and "choked" her during an argument in the theater at the pitcher's home. She said that the argument was broken up by family members and that Chapman left the house.

Barnea told police that she heard gunshots a short time later and went outside and hid in the bushes until she could make contact with police. She left the couple's infant daughter inside the home.

Police say in the report that they interviewed Chapman, who said the argument had happened during a party. He said he poked Barnea on the shoulder, telling her not to "talk to him like that." He said she fell to the ground, yelling.

Chapman told investigators that Barnea's brother pushed him to the ground. Chapman said he got up, left the house, and got into the passenger seat of a 2015 Land Rover with his friend. Chapman said he punched the passenger window with his left fist, creating a laceration on the knuckle of his left pinky. At that point, he told investigators, he got his pistol from the glove box and locked himself in his garage. He said he fired seven rounds into a concrete wall and fired one round through a window before tossing the pistol aside.

Police said Chapman refused to give a sworn statement or sign an affidavit of the complaint. He signed a consent order allowing officers to search his garage.

Officers said Barnea collected her belongings and left the home.