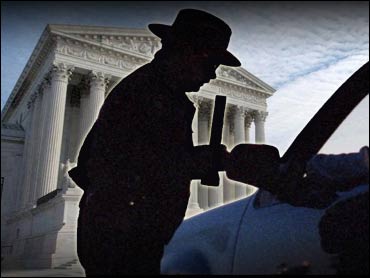 The Supreme Court gave police leeway Tuesday to use random roadblocks to track down criminals.

Justices said in the 6-3 ruling that police checkpoint stops, when used to seek information about recent crimes, do not violate the privacy rights of other motorists.

The court overturned a decision by the Illinois Supreme Court, which had ruled that it was not an emergency in 1997 when officers stopped cars at an intersection outside Chicago to pass out leaflets seeking information about a fatal hit-and-run.

At the checkpoint, Robert Lidster was arrested for drunken driving, reports CBS News Correspondent Barry Bagnato, and he challenged the roadblocks all the way to High Court — and lost.

"This decision is not a surprise and is fairly consistent with what the Justices have done in this area over the past few years," says CBSNews.com Legal Analyst Andrew Cohen. "The Court has been quite willing lately to permit the police to undertake all sorts of roadblocks for many different kinds of reasons, and this ruling extends that concept."

Three justices, however, expressed concerns that the ruling could open up motorists to police interference without yielding information about crimes.

The case was a follow-up to a 2000 Supreme Court ruling that roadblocks intended for drug searches are an unreasonable invasion of privacy under the Constitution.

Breyer said that in this case, authorities were investigating a specific crime — and one that resulted in a death.

The roadblock that snared Lidster had been set up at the same spot and time of day that the hit-and-run took place, in hopes of getting tips. Authorities said that Lidster nearly hit an officer at the scene.

The ruling is a victory for Illinois and 14 other states which had asked the court to use the case to clarify how far police could go to seek information about crimes.

"This decision is a sign that there is a clear majority on the Court that believes that the police ought to have more power and more options, not just to stop crime, but to try to investigate criminal activity after it has happened," said Cohen.

Breyer said that short stops, "a very few minutes at most" are not too intrusive on motorists. Police may hand out a flyer, or ask drivers to volunteer information about crimes, he said.

In the partial dissent, Stevens said that motorists will be trapped by the checkpoints.

"In contrast to pedestrians, who are free to keep walking when they encounter police officers handing out flyers or seeking information, motorists who confront a roadblock are required to stop, and to remain stopped for as long as the officers choose to detain them," he wrote.

The delays "may seem relatively innocuous to some, but annoying to others ... still other drivers may find an unpublicized roadblock at midnight on a Saturday somewhat alarming."

The three dissenting justices said the case should have been sent back to Illinois courts for more consideration.

In a ruling released Tuesday, the Supreme Court voted unanimously to restrict when consumers can sue over bad telephone service, a victory for regional phone companies.

The justices held that consumers cannot use federal antitrust laws in suits claiming that regional phone companies provide substandard service to rivals, which hurts customers of those rivals.

The Bush administration had sought that outcome, arguing that a ruling otherwise would open courts to multiple lawsuits accusing the regional phone companies of failing to assist their rivals and "could threaten substantial disruption of the telecommunications industry."