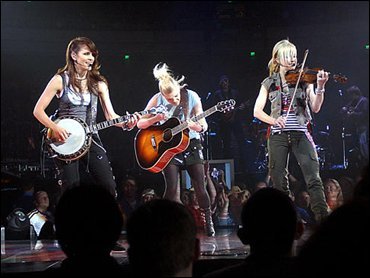 Many country music fans aren't ready to forgive the Dixie Chicks' Natalie Maines for comments critical of President Bush: Voters rejected the group's nominations for three Academy of Country Music Awards and the audience booed the mention of their name.

Presenter Vince Gill urged the audience at Wednesday night's show to "Stop it, stop it." He added: "You know who gets blessed when you forgive — you."

Maines has been in the country music doghouse since she told a London audience on March 10, before the start of the war in Iraq, that "we're ashamed the president of the United States is from Texas."

The night was much better for two of the academy's most successful artists. Alan Jackson won album of the year for "Drive" as well as a video honor, and Brooks & Dunn were the top vocal duo. Brooks & Dunn extended their collection of ACMs to a record 17. Jackson's tally rose to 11.

Toby Keith led this year's nominations with eight and avoided a second shutout by being named entertainer of the year. By the time his name was announced, he had left the venue.

The show repeatedly saluted the armed forces. The audience erupted in cheers for three freed POWs of the Iraq war who were invited on stage — Chief Warrant Officer Ronald Young Jr., from Fort Hood, Texas; and Pvt. 1st Class Patrick Miller and Spc. Shoshana Johnson, both from Fort Bliss, Texas.

Lonestar sang a new version of "I'm Already Home" dedicated to the troops.

"I've spent 11 years sitting out in the audience hearing other names called. It's just an amazing feeling to have it finally be your name," she said.

Rascal Flatts won their second and third ACMs as group of the year and for the song "I'm Movin' On," written by Phillip Brian White and David Vincent Williams.

The Dixie Chicks were a late addition, performing by satellite from their hometown of Austin, Texas.

The boos erupted when Gill named the Dixie Chicks among nominees for entertainer of the year. Gill said afterward that the reaction was more subdued than at last month's Flameworthy Awards. "It was a pretty volatile crowd that time. This one wasn't so bad," he said.

It didn't seem that way to host Reba McEntire.

"It was a pretty big negative response. I don't think it's over," she said after the program.

The show, televised by CBS, was presented from Las Vegas this year for the first time in the event's 38-year history and McEntire managed to get both the Chicks and Las Vegas in her opening monologue.

"Everybody here loves to gamble," she said during an opening monologue. "They're backstage right now checking the latest odds on the Dixie Chicks playing the Bush family reunion."