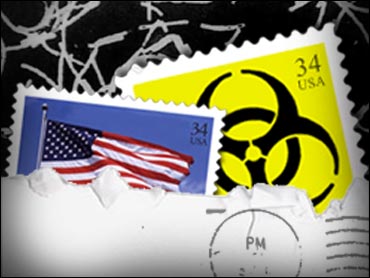 The suspicious powder sent in a threatening letter to Sen. Tom Daschle's office was talc, the FBI said Friday.

"We are going to investigate the letter as a criminal hoax," FBI spokesman Chris Murray said.

He declined to discuss details of the letter.

The tests confirmed earlier procedures which showed the letter did not contain anthrax, unlike a heavily contaminated letter sent to the senator Oct. 15.

Discovery of the new letter Thursday prompted a quick response from emergency crews, who were dispatched to Daschle's Capitol office. But an FBI official, speaking on condition of anonymity, said later that the new letter appeared to be an anthrax hoax. It was sent to the Army's Fort Detrick, Md., testing facility.

Fort Detrick spokesman Chuck Dasey said tests on the new letter would take about 48 hours and final results were not expected before late Saturday. He said the results would be announced by the FBI.

Daschle described the letter opened Thursday as "a copycat mailing" that was similar in message and tone to the previous letter.

"It said this was anthrax, death to America, something to that effect, and 'stop the bombing' was the only phrase that was new," Daschle told reporters.

"Stop the bombing" apparently referred to the American air campaign in Afghanistan, which had not yet swung into high gear at the time the anthrax-tainted letter was postmarked in October.

Daschle, who was not in the room at the time, said the new letter was opened Thursday morning in the Capitol barely 20 feet from the Senate chamber. Congress is currently in recess.

"The early test showed in this case that it was not anthrax," Daschle said in a telephone conference call with reporters. "We took this white powder very seriously. There was a note inside that basically said this was anthrax."

Daschle said the substance was in a separate packet, possibly explaining why no powder fell out when the corner of the envelope was cut under congressional mail screening procedures. The mail was irradiated, and a field test showed the substance is not hazardous, Capitol Police spokesman Lt. Dan Nichols said.

Nichols would not rule out the possibility the substance could have been harmful before it was irradiated.

Discovery of the letter in Daschle's second-floor suite of offices prompted officials to briefly quarantine some areas of the Capitol, but the building was not evacuated.

Sen. Patrick Leahy, D-Vt., also has received a letter contaminated with anthrax. Five people have died from anthrax since early October and 18 more were infected.

An FBI official, speaking on condition of anonymity, said the new letter appeared to be an anthrax hoax. It was sent to the Army's Fort Detrick in Maryland for further testing.

A separate law enforcement source, who would not be quoted by name, said the letter was postmarked from London in November. The letter had a stamp affixed, whereas anthrax-contaminated letters previously sent to Daschle nd Leahy were on pre-stamped envelopes used only for domestic mail.

The initial field test on the new letter normally would pick up the presence of anthrax spores even if they had been killed in the irradiation process now used on all mail addressed to Congress, the law enforcement source said.

However, Dr. Richard Meyer, an expert at the federal Centers for Disease Control and Prevention in Atlanta, said field tests were not very good at detecting low amounts of anthrax and that laboratory tests were more reliable.

The October letter sent to Daschle exposed more than two dozen people to anthrax spores and led to the closure of the Hart Senate Office Building, where Daschle also maintains an office. The Hart building, which is across the street from the Capitol, remains closed. But Environmental Protection Agency officials said they believe a repeat fumigation effort last weekend killed any remaining spores.

Azeezaly Jaffer, a Postal Service vice president, said postal officials were talking with the FBI about increasing to $2 million the reward for information leading to the arrest of anyone mailing anthrax.