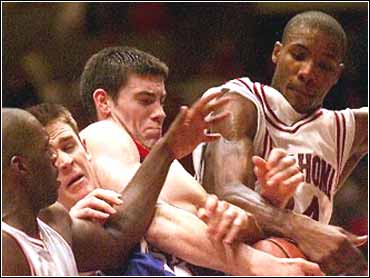 Jeff Boschee found his stroke again for Kansas, and Aaron McGhee never did for Oklahoma. The result was predictable.

Boschee had been 5-of-31 from 3-point range in the previous seven games. He was 4-of-8 on Saturday.

"I told him he was going to have to start hitting the jump shot or he was going to make me look stupid," coach Roy Williams said. "He's really shot the ball very well in practice and in our shooting drills. It just hasn't been going in the game."

Nothing went in for McGhee, Oklahoma's leading scorer at 16 points per game. He was 0-of-9 from the field, didn't score and fouled out late in the game.

"If you had told me we were going to hold Kansas to 43 percent and they would only score 69, I'd say I think we're going to win," coach Kelvin Sampson said.

Hollis Price scored 18 and Nolan Johnson had 16 for Oklahoma.

Boschee had three 3-pointers during a run late in the first half that gave the Jayhawks a 31-19 lead. Kansas needed his outside touch, because Oklahoma blocked eight shots in the first half.

Kelley Newton's third 3 of the half got Oklahoma to within eight points at halftime, then Johnson scored eight of his team's 10 points during a stretch in the second half that helped the Sooners tie it at 40.

But two straight inside baskets by Nick Collison started an 11-3 run that gave the Jayhawks control for good at 51-43. Hinrich scored six points during the spurt.

While Kansas was putting together its run, Oklahoma was missing seven shots and committing three turnovers.

"Once we got it tied up with 11 minutes to go, those next three or four, five or six possessions, those become critical," Sampson said. "We were good enough to get it tied. Now we need to get good enough to hold them at bay and go make baskets."

The margin was seven with three minutes remaining, then Boschee made a 3-pointer, Drew Gooden scored inside and Gregory sank two free throws to make it 64-50 with 1:24 left.

The 16 points marked Boschee's first double-figures game since Nov. 27, when he scored 19 against Middle Tennessee. He said he recently reviewed game tapes from last year and realized he has been rushing his shots and not getting properly set.

"I tried to slow it down. I'll be fine," he said. "I had to start doing something if I wanted to keep my job."

Kansas tried to swarm around McGhee whenever he got the ball inside, and it worked. He forced some bad shots. Others just didn't fall.

He picked up his third and fourth fouls within a one-minute stretch in the second half, eventually fouling out in the final 90 seconds.

"I think the young man just didn't have a very good day, and hopefully our defense had something to do with it," Williams said.