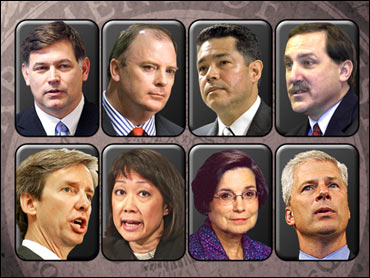 This isn't what the rest of the Atlantic Coast Conference wanted to see No. 3 Duke gaining momentum in early January.

The Blue Devils, gunning for an unprecedented fifth straight ACC regular-season title, routed Clemson 115-74 on Sunday behind 25 points from Carlos Boozer and 21 each from Shane Battier and Nate James.

It was Duke's highest point total of the season.

"We're not as good as the team was at the end of last year, but we have the potential to be a lot better," Duke coach Mike Krzyzewski said. "But the neighborhood we're in is much better. It's all relative."

You could have fooled Clemson coach Larry Shyatt, who believes Duke is still the best in the ACC.

"They play clearly at a different level," Shyatt said. "I compliment their talent. I believe their talent is clearly as good or the best I've seen in 20 years, with three or four lottery picks."

"We're confident in our ability to score points," said Battier, who was one of five starters who combined for 99. "We never really go into a game talking about margin of victory or how many points we're going to score. We worry about the defensive end."

ACC scoring leader Will Solomon (22.1) extended his school record of consecutive double-figure point games to 45, but managed just 13 and wasn't a factor for the Tigers (9-6, 0-2).

Solomon's streak of scoring 20 or more ended at six games, the best at Clemson since Horace Grant did it in 1986-87. Tony Stockman led the Tigers with 22.

"We just tried to make it more difficul for Solomon to catch the ball and be open when he caught it for a shot," Krzyzewski said.

The victory was the 48th in the last 50 ACC games for the Blue Devils, 24 of which have been by margins of 20 or more points. Duke opened league play with a 27-point victory at Florida State Thursday.

And while the Tigers and the Seminoles are two of the lower-tier teams in the ACC, the Blue Devils show no signs of coming back to the pack.

This one was close for several minutes before Duke went on a 37-5 run, scoring 18 straight points during one stretch to bury the Tigers, who lost their 10th in a row to the Blue Devils while falling to 4-48 all-time in Cameron Indoor Stadium.

After scoring 92 in a loss to No. 17 Maryland five days ago and getting off a fast start here, Clemson could do nothing right on offense. The Tigers finished the first half shooting 27 percent. They turned the ball over 16 times and were outrebounded 25-15.

"After watching Clemson play Maryland we knew they could put points on the board," Krzyzewski said. "We really practiced hard defensively and tried to take some things away from them."

Clemson's scoreless stretch lasted six minutes as the Tigers were 0-for-10 from the field with seven turnovers.