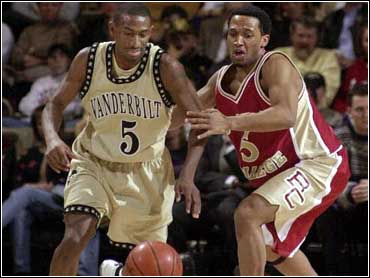 While Atiba Prater credited his Vanderbilt teammates for his record, Boston College coach Al Skinner had harsh words for the school after the 24th-ranked Commodores beat his Eagles 76-58 Sunday.

Skinner vowed he would never again to play Vanderbilt, furious that the contract between the schools forced his team to play one day after it played St. John's in New York.

"I doubt seriously if we're going to continue (this series, which has one game remaining next year at Boston under its contract). As long as I'm there, we won't be playing Vanderbilt again," Skinner said.

Prater, who scored 10 points, set Vanderbilt's career record for assists. The 6-1 senior broke Frank Seckar's record with his 456th assist early in the second half. He leads the Southeastern Conference this season with 6.3 assists per game.

"It's a big accomplishment to surpass Frank Seckar and I am overjoyed, but the record actually belongs to this team," Prater said. "I give all the credit to my teammates."

Boston College, which lost 59-58 to St. John's, didn't arrive in Nashville until about 10 p.m. Saturday, and the Eagles elected not to practice Sunday morning when they were told the only time available would be 10-11 a.m., hours before their normal game-day practice time.

Skinner didn't mince words after the game, complaining that meeting the contractual schedule hamstrung his players.

"You try to do things on a handshake and an understanding. We're all in the same business. We thought we had a date (in the first week in January),"Skinner said.

"I think we learned a valuable lesson and we kind of go from there," he said. "They got the result they wanted and I'm sure they're more than happy with it. They don't care about Boston College."

Vanderbilt spokesman Tom Weber said Boston College turned down other dates. Weber said the team did not want to play in November or December "under any circumstances," and had a choice of five dates in January.

"Boston College picked this date, after they had gotten the Big East schedule," Weber said. "They picked it knowing they were going to have to play it the day after the St. John's game."

Dan Langhi had 16 points to lead for players in double figures for the Commodores, who under first-year coach Kevin Stallings have surpassed last season's win total.

A 19-9 run at the start of the second half helped BC climb within 55-46, but Vanderbilt's Rick Jones hit a key 3-pointer.