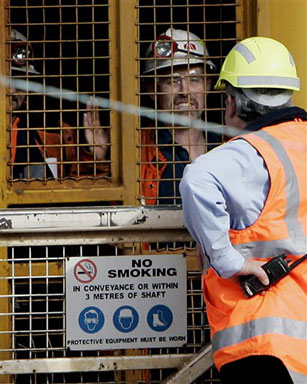 After getting clobbered again by Kansas, beleaguered Kansas State coach Tom Asbury knew what was on everybody's mind.

"I'm not going to talk about the job situation. So don't ask," the coach said after No. 20 Kansas' 94-65 thrashing of Kansas State.

According to published reports, Asbury's job is in jeopardy, and Kansas is a major reason why, beating him 14 straight times as part of an 18-game winning streak over the Wildcats.

"It's obviously disappointing," said Asbury, who has a 84-83 record as he nears the end of his sixth season at Kansas State.

"We tried about everything we know and we'll continue to try. But the young guys are more resilient than coaches."

Asbury seems certain to fall under increasing fire from disgruntled fans and administrators. Home attendance at 13,500-seat Bramlage Coliseum, where Kansas has won every year since it opened in 1988-89, has dropped to under 8,000 a game.

"I have to be resilient," Asbury said. "What's my alternative?"

"This is a role reversal," said Kansas forward Kenny Gregory, who had 17 points. "We know how it is to lose by 30. Now we know how it is to win by 30. We just didn't want to have that feeling of getting dominated like we did on Monday."

Kansas (18-6, 7-3) got off to a big early lead as Jeff Boschee and Gregory snapped out of shooting slumps and led the Jayhawks to their first road victory in five tries.

"We really did sme nice things," Kansas coach Roy Williams said. "But we played so poorly on Monday night and you have to be embarrassed a little bit by that. Jeff Boschee had gone through a long period where he hadn't shot the ball very well, but he came back alive today and put the ball in the basket for us."

A sizable percentage of Saturday's crowd, Kansas State's first sellout of the year, was Kansas fans.

"I heard the rock-chalk Jayhawk chant and I saw a lot of (Kansas colors) out there," Collison said. "It feels good to come on the road and see a lot of fans like that."

The Wildcats were just happy to see their arena full.

"We finally fill this place and we get beat by 30," said Kansas State's Tony Kitt, who had 20 points and nine rebounds.

Cortez Groves had 14 points for Kansas State, which hasn't beaten Kansas since January 1994.

The Jayhawks took control immediately, building a 31-11 lead. The Wildcats hit only five of their first 19 shots and committed 10 turnovers.

Finally, Groves stopped the Kansas surge by completing a three-point play and then hitting a 12-footer from the lane. By then, however, the Jayhawks had a 20-point lead en route to a 50-23 halftime bulge.