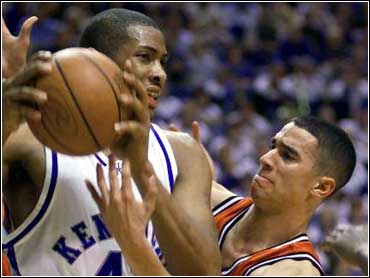 J.P. Blevins turned a rare start into a starring role with some timely 3-point shooting that ignited a sluggish Kentucky offense.

Blevins, thrust into the starting lineup when three players were benched for disciplinary reasons, responded with a career-high 14 points in leading No. 19 Kentucky to a 70-64 win over Georgiaon Saturday afternoon.

The sophomore guard hit a 3-pointer to tie the game at 50, and added another to put the Wildcats ahead 56-52 as Kentucky continued its dominance over Georgia.

"I was able to help spark a run there in the second half," said Blevins, who hit 4-of-8 3-pointers. "It felt great. I think we needed those 3s at that time."

The Wildcats also exerted their muscle underneath as Jamaal Magloire and Jules Camara both registered double-doubles. Camara finished with 12 points and 12 rebounds, while Magloire had 11 points and 13 rebounds.

The Wildcats struggled against Georgia's zone, hitting just 38 percent from the field. Bogans hit three 3-pointers, including one from the left corner that put Kentucky ahead for good at 53-50 with 10:22 left in the game. The shot came amid a 13-2 run and gave the Wildcats their first lead since the first half.

D.A. Layne led Georgia with 18 points, including 5-of-13 shots from 3-point range. Shon Coleman added 16 points and Anthony Evans had 12.

"We came out and fought hard today," Layne said. "Wfought as hard as we could throughout the game, but at the end we just couldn't pull it off. They really held down their territory."

Georgia coach Jim Harrick said his team played well, but the game came down to the Bulldogs missing some shots late while Kentucky was converting its chances.

"They are very good, and they hit about six 3s in a row," he said. "To me, that is very uncharacteristic of this team. So you have to give them credit."

The game started with a surprise with Smith juggling his lineup, starting Camara, Blevins and freshman Marvin Stone. Usual starters Bogans and Desmond Allison didn't enter the game until seven minutes were left in the first half. Tayshaun Prince, the Wildcats' second-leading scorer, didn't play at all.

Smith said later that the three players were punished for "academic deficiencies."

"They needed to be disciplined," Smith said. "There were different levels of discipline for each player. But you're not going to play basketball at Kentucky if you don't go to class and take care of your academics. That problem needed to be addressed."

Georgia (10-15, 3-9) led for most of the first half, taking advantage of cold shooting by Kentucky. The Bulldogs took their biggest lead of the first half at 27-21 on a basket by Anthony Evans with 7:34 left.

Kentucky reeled off seven straight points on a 3-pointer by Bogans and two free throws each by Smith and Camara to take a brief 28-27 lead at the 4:31 mark.

The Wildcats scored only once more in the half, on a dunk by Magloire at 3:32. The Bulldogs used 3-pointers by Layne and Patrick and two free throws by Coleman to lead 35-30 at the half.

Georgia hit a pair of early 3-pointers in the second half, and took its biggest lead at 44-35 on a 3-pointer by Layne.