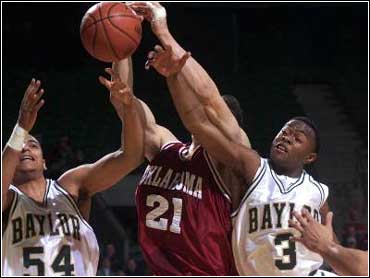 A strongly-worded pep talk from coach Kelvin Sampson and a more aggressive Eduardo Najera made the difference for 18th-ranked Oklahoma.

After Sampson's halftime tongue-lashing of his team Saturday, Najera responded with 14 points and 10 rebounds as the Sooners (18-3, 6-2 Big 12) quickly erased a seven-point deficit and went on to a 68-59 victory over Baylor.

"The bottom line is that we were not playing hard, so we had a tough meeting at halftime," said Najera, who finished with 20 points and 16 rebounds. "He knows what to do, and he got us ready for the second half."

Whatever Sampson said worked and kept Baylor (11-9, 2-7) from breaking another lengthy losing streak.

The first of three straight 3-pointers by J.R. Raymond tied the score with 16:10 left, just seconds after Najero worked inside for a basket. Raymond hit another 3-pointer with 14:39 left to break the tie, and another about a minute later.

The closest Baylor got after Raymond's 3s was 53-51 when Charlie Naihe made a 3-pointer with 10:03 left. Najera followed with a basket and the lead grew to as much as 13.

In recent games, Baylor had snapped a 22-game Big 12 losing streak, then won a conference game on the road for the first time in 19 trips. The Bears still haven't beaten a raked team since 1998, and have lost 12 straight against the Sooners, including 76-43 last month.

"In the first half, they were taking my touches away," Najera said. "Baylor was doing a good job, but I was not being very aggressive like the way I usually play. The second half was different. I just got into the game, concentrated better."

"They made some good adjustments in their defense and that was a very important aspect of the second half," said Baylor coach Dave Bliss, whose first NCAA I-A head job was at Oklahoma. "The start of the second half, we didn't make some plays, we got a little down because they came out of the chute."

Bliss led the Sooners to the NCAA tournament in 1979, their first appearance since 1947, and they have been to 14 more since he left after the following season. The Bears, who haven't been to the NCAA since 1988, already have won five games more than they won all last season.

Jamie Kendrick had 13 of his 15 points by halftime for Baylor, including his layup with 5:49 left that put the Bears ahead until midway through the second half.

DeMarcus Minor led the Bears with 17 points and eight assists.