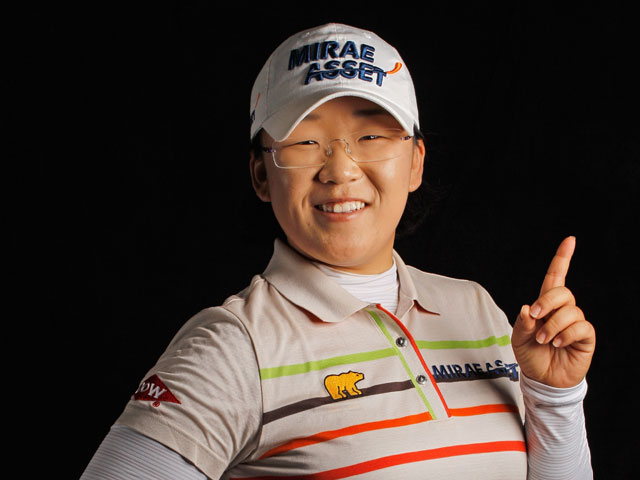 (CBS) It was a fight to the finish during the 2010 LPGA Tour season, but when the dust settled, 22-year-old Jiyai Shin stood as the No. 1 women's golfer in the world.

Shin became the first Korean player to finish the year as the top seed in the Rolex Ranking system, the official Women's World Ranking system established in 2006, since Annika Storenstam and Lorena Ochoa bid farewell to the game in 2008 and 2009 respectively.

A week before Shin was to head down under to compete in the Australian Women's Open, her first event for the 2011 season, she spoke with CBSNews.com about the year ahead, the tragic loss of her mother, her music career and how she plans to stay on top.

CBSNews.com: At 22 years of age, you are the No. 1 women's golfer in the world. Is there pressure with holding that spot?

Shin: There was pressure and there still is (laughing), but now I'm learning to enjoy it more.

CBSNews.com: How did you get started playing golf?

Shin: I started playing when I was 11. I remember watching Se Ri Pak win the 1998 U.S. Open, and after that I started playing. She is my hero. We are close now, but I still get so nervous around her (laughing).

CBSNews.com: Are there any other players whom you admire?

Shin: Nancy Lopez and Juli Inkster are always very kind to fans, they're great players and nice people. I hope to leave a legacy on the game like them.

CBSNews.com: Do you have any expectations going into the 2011 season?

Shin: I need to work very hard to keep improving if I want to stay number one. This year I've been training at my course in Palm Springs and spending a lot of time on the range. I work out two times per day. Every morning I wake up at 6:00 a.m. and finish at 7:00 p.m., so I spend the whole day practicing and working out. I need more distance. I've been working a lot on my whole body movement and have really good confidence. I can't wait to start the season.

CBSNews.com: The LPGA recently celebrated its 60th Anniversary. This season the RR Donnelly Founders Cup is a charitable event meant to celebrate the 13 women who founded the organization. How important is this tournament? And what do you say to those who may criticize it, since there won't be a traditional prize winning purse?

Shin: It's very important because we need to honor the founders of our Tour. We are professional golfers and it's good to make money, but it is also important to support charities.

CBSNews.com: Your Single "Don't Say Goodbye" is a hit in Korea. When did you start singing?

Shin: I always loved to sing, since I was a young girl. My father is a pastor so I was always singing in the church when I was young.

CBSNews.com: You attribute much of your success to your family and it's evident that they have played a significant role in your development. Can you talk about how the accident in which you lost your mother and both your brother and sister were severely injured impacted your life? How did you pull through?

Shin: Yes, my mother got in accident in Korea with my younger brother and sister in 2003. When I think of 2003-2004 it's just so dark, but because I cared so much about my brother and sister it made me work harder. My father is a pastor and my faith is very important for me. I would like to be able to use my success in golf to help others.