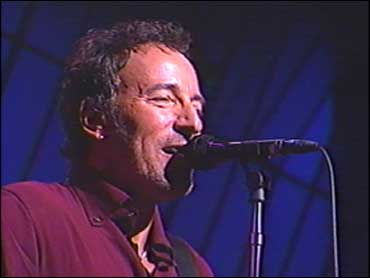 Bruce Springsteen and Jon Bon Jovi have performed at many benefit concerts over the years. Now the state of New Jersey has its hand out.

Two state lawmakers have come up with a proposal to solve New Jersey's arts funding crisis, and they want the two native rockers to help out.

Sen. Nia Gill and Assemblyman Neil Cohen want to create a New Jersey State Council on the Arts Donation Fund to make up for arts funding being cut from the state budget.

The Democrats said they hoped Springsteen and Bon Jovi would hold benefit concerts at the Continental Airlines Arena or Giants Stadium to aid in the effort.

Cohen said he doesn't know either of the rock stars, but he attended a fund-raiser for Al Gore's presidential campaign in 2000 at Bon Jovi's mansion in Middletown.

"They will be approached," Cohen said. "Bon Jovi seemed like a decent guy who is committed to the arts and music."

Lauren Schneider, a spokeswoman at Bon Jovi's record company, had no immediate comment Friday. Springsteen spokeswoman Marilyn Laverty could not be reached.