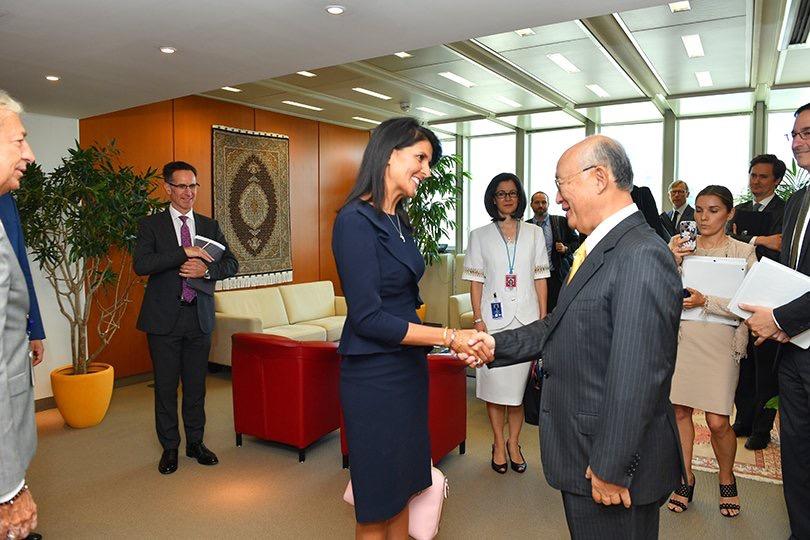 VIENNA -- U.S. Ambassador to the United Nations Nikki Haley arrived at the headquarters of the International Atomic Energy Agency (IAEA) on Wednesday to increase the Trump administration's understanding of Iran's compliance with the nuclear deal reached under President Obama, but also to try and ratchet up pressure on Iran after its recent ballistic missile tests.

Haley met IAEA Director General Yukiya Amano, and was also to meet some of the technical experts who monitor nuclear activities, including those in Iran governed by the nuclear pact signed by the U.S., a handful of its allies, Russia and Iran.

In a statement released after her meeting with Amano, the U.S. United Nations delegation said Haley had stressed U.S. "concerns about ensuring Iran strictly adheres to its obligations." One of her primary missions -- not just in Vienna but back at U.N. Headquarters -- is to persuade the international community that Iran is not adhering to those obligations, and to ensure that it does.

The trip comes as the Trump administration's war of words with Iran is ramping up. Iran's nuclear chief, Ali Akbar Salehi, issued an ominous warning on Tuesday that his country could, "if we make the determination… resume 20 percent-enrichment in, at most five days." Under the terms of the nuclear deal, Iran is banned from enriching uranium to that level, which can make it useable in nuclear weapons.

For now, Haley is focused on trying, along with Western partners, to make what President Trump has called the "worst deal," better, by pressing Iran to stop test launching ballistic missiles.

The U.S. has imposed new sanctions under Mr. Trump, pointing at the missile launches, Iran's human rights record and its support of terrorism abroad, but the 2015 nuclear deal -- officially the Joint Comprehensive Plan of Action (JCPOA) -- does not explicitly deal with any of those issues.

The issue is the interpretation of the nuclear agreement, and whether launching ballistic missiles is, in fact, a violation of it.

In an August 2nd letter sent to Italian Ambassador Sebastiano Cardi (who chairs the Iran sanctions committee) and to U.N. Secretary-General Antonio Guterres, Haley argued on behalf of France, Germany the U.K, and the U.S. that Iran had taken actions inconsistent with the nuclear deal by launching a Simorgh space launch vehicle that has the capacity to carry a nuclear weapon.

The U.N. Security Council Resolution (UNSCR 2231) on the nuclear pact calls on Iran, "not to undertake any activity related to ballistic missiles designed to be capable of delivering nuclear weapons, including launches using such ballistic missile technology."

In the letter she penned, Haley argued that, "Iran's longstanding program to develop ballistic missiles continues to be inconsistent with UNSCR 2231," and she called for the issue to be taken up at the Security Council.

While all four Western powers that signed onto that letter are in agreement that Iran's ballistic missile tests are a violation of the U.N. resolution, neither the U.K., France, nor Germany have followed the U.S. lead to impose new sanctions.

Asked about the letter, Italy's Cardi told CBS News that this week that he is consulting the other members of the committee to put together a unified response.

After the most recent launch by Iran, Haley laid down the gauntlet: "We will continue to impose consequences until Iran stops its provocations and complies fully with Security Council resolutions."

The issue that Haley confronts is that the IAEA is not mandated to deal with missile tests, and in its seven reports on Iran's adherence to the deal thus far the agency says Iran has completed the steps required under the JCPOA and the U.N. Resolution.

U.S. law requires the White House to certify Iran's compliance with the deal every 90 days, which Mr. Trump, despite his professed reluctance, did for a second time in July in spite of pleas from several senators.

Haley's trip will have implications for the next round of certifications of the nuclear deal, by both the U.S. and the IAEA, in October. There have been, experts point out, a few technical breaches in by Iran of the terms of the nuclear deal, but the June report appeared to show that those had been corrected.

While Mr. Trump continues to lambast the deal, Haley continues to try and garner support in the international community for the position that Iran is violating more than just the spirit, but the letter of the deal by testing nuclear-capable missiles.

Gary Sick, a senior research scholar at Columbia University's Middle East Institute who served on the National Security Council under Presidents Ford, Carter, and Reagan, tells CBS News that the Western parties to the JCPOA are in agreement: "The other parties, together with the U.S., are anxious to put as much pressure on Iran as possible to at least modify or reduce its ballistic missile tests."

He says that is, at least in part, why Haley came to IAEA headquarters on Wednesday, and he agrees it necessary to keep the pressure on.

Despite the tough talk by Tehran and Washington, however, Sick doesn't think the deal is likely to be scuttled by the Trump administration.

He says the ambiguity on Iran's missile testing -- the ambiguity causing the U.S. angst and the current war of words -- was deliberately designed into the nuclear deal.

"It was a very specific set of words; an agreement to disagree," he says. "We knew that this was going to happen. It was written into the agreement that way."

Iran believes Mr. Trump wants to kill the agreement and has threatened to exit it as well. Iran's Foreign Minister Javad Zarif said in a series of tweets that Mr. Trump, "always wanted to kill JCPOA. To avoid isolation, he's trying to blame it on Iran."

Haley insists that is not the case. She told The Washington Post in an interview published on Tuesday that the Trump administration had made "no decision" yet on its policy regarding the nuclear deal.

The statement released by her office on Wednesday said Haley and Amano had discussed "the importance of preventing Iran from exploiting ambiguous language in the nuclear agreement."

But, "whatever the flaws of the existing nuclear deal, Trump will find that criticizing it is far, far easier than crafting an effective replacement to it," says Matthew C. Waxman, faculty chair of the program on Law and National Security at Columbia Law School.

As Gary Sick put it, more bluntly, if Mr. Trump choses to "destroy the JCPOA in the name of preventing missile tests," he could "end up in a situation where Iran actually is free to go ahead and build a nuclear weapon."