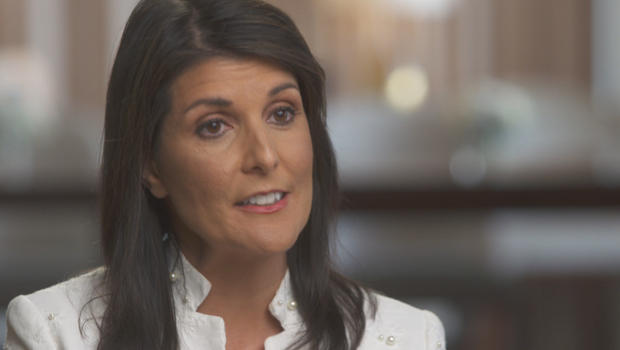 Our SUNDAY PROFILE this morning is of Nikki Haley, our outspoken Ambassador to the United Nations. She talks with Rita Braver:

If this administration has a star, it just might be Nikki Haley. From her first day on the job as United Nations Ambassador, the 46-year old laid down the law.  "For those who don't have our back, we're taking names," she said in January 2017.

And as she took Braver on a visit to the floor of the United Nations Security Council, she defended her tough stance.

Braver said, "Some people say there's a little too much swagger, you know that."

"You know, I don't think it's swagger. I think it's passion.  I am very passionate about defending the United States."

After a gas attack in Syria, she held up pictures of injured children, blaming Russian-backed forces. "How many more children have to die before Russia cares?" she said.

And late last year, she pushed through tough international sanctions against North Korea after they tested an intercontinental ballistic missile – sanctions that may have helped lead to recent promises to roll back North Korea's nuclear program, and to an upcoming summit.

"A few months ago, it almost seemed like this administration was prepared for war with North Korea. Were you prepared for that?" asked Braver.

When you spend some time with Haley, you notice how often she brings President Trump into the conversation. She is unfailingly loyal to him, constantly stressing his accomplishments.

Braver asked, "What do you say to people who say, 'Okay, maybe he's done some things right, but his behavior is sometimes reprehensible?' Do you ever think that?"

"First of all, he has his communication style, but you're not hearing me defend that," Haley said. "What I will tell you is, if there is anything that he communicates in a way that I'm uncomfortable with, I pick up the phone and call him. I don't need to be public about that. I think that's a private conversation that should happen when I feel it, and I think it's one that he's receptive to when I do."

One place where Haley is in lockstep with President Trump is on his charges that Special Counsel Robert Mueller's investigation into Russian interference in the 2016 presidential election has gone on too long.

Braver asked Haley, "Should the president shut it down?"

"No, not at all – I mean, anything that comes like this, it should play its part. It should go through the process.  But they need to do it quickly.  For the good of the country this investigation needs to happen quickly."

Haley does sometimes put a softer focus on the president's pronouncements.  Earlier this year, Mr. Trump threatened to cut off aid to Central American countries that don't do more to stop drug trafficking. "They're laughing at us, so I'm not a believer in that," Mr. Trump said. "I want to stop the aid."

A few weeks later, Braver traveled to Honduras with Haley as she conferred with senior officials; witnessed a drug enforcement exercise; and also made time to visit a U.S.-funded afterschool program.

Haley said, "If they get education and they get training, then we know that they're going to be productive. If they don't, we'll be dealing with resentful children that are uneducated and angry, and that's what we don't want."

"I'm not a liberal, I assure you. I am a conservative who understands prevention saves us a lot more money in the long run."

In fact, Haley is a Tea Party conservative – against Obamacare, anti-abortion, and tough on illegal immigration, as the daughter of Sikh immigrants from India who came to the U.S. legally and settled in the small town of Bamberg, South Carolina.

Growing up, Haley said, her family as always the "other."

"Your father wears a turban, your mother wears a sari. We looked different, everybody treated us different. But it was in that small town that I'm very grateful, because my parents reminded us that it's not about how you are different, it's about how you're similar."

After Clemson University, Nikki Randawa (as she was known) married Michael Haley, now a National Guard Officer.  They have two children.  She was an accountant, working in her family's gift and clothing business when, in 2004, she decided to run for the state legislature.

"You took on the longest-serving member of the state legislature, a man who as I recall referred to you as 'little lady,' and you won," said Braver.

"You know, ignorance is bliss!" Haley laughed. "All I knew was, there were too many lawyers at the statehouse, and they needed an accountant. And I needed to figure out how to get there."

In 2010 she beat the odds again by winning the Governor's race. But it was a dirty campaign, with both racism and sexual innuendo that would surface again this year.

Braver said, "In that campaign, you had two people falsely say that they have had extramarital affairs with you. Just recently we had somebody who was very much slapped down trying to insinuate that there was something with you and the president. Is that just the price you pay for being a young, attractive woman in politics?"

Haley replied, "What I've noticed is, if a woman does well, if a woman's good at her job, for some reason people have trouble giving her that credit for just being good at her job. What I will tell you is, I will stand up every time it happens and let people know it is not okay."

As South Carolina Governor, Haley gained national prominence after she pushed through a bill to remove the Confederate flag from the State Capitol grounds in the wake of a racially-motivated shooting that killed nine people in a black church. She said, "That flag, while an integral part of our past, does not represent the future of our great state."

She was handily re-elected, but left to join the Trump Administration, where she's shown it's a mistake to mess with Nikki Haley.

Last month on "Face the Nation," in response to the latest gas attack in Syria (believed carried out by Russian-backed forces), she announced:

"You will see that Russian sanctions will be coming down. Secretary Mnuchin will be announcing those on Monday if he hasn't already and they will go directly to any sort of companies that were dealing with equipment related to Assad and chemical weapons use. And so I think everyone is going to feel it at this point. We wanted their friends Iran and Russia to know that we meant business and that they were going to be feeling the pain from this as well."

But at the last minute, the White House decided to hold off.

The president's new economic advisor, Larry Kudlow, then came out and said that Haley had had some "momentary confusion" in announcing new sanctions. She fired back in a public statement that said, "With all due respect, I don't get confused."

"That was a pretty strong statement," Braver asked. "Why'd you feel like you wanted to say that?"

"That's just how I function. If there's something wrong, you go and you make it right. But I think what's more important is the fact that Larry's a friend of mine. He immediately called, he immediately apologized."

That combination of silk and steel has cut through to the public. A new Quinnipiac University poll found her approval rating much higher than that of the President (63% to 39%). She even scores 55% among Democrats … which has led to inescapable speculation:

About running for president, Haley says, "I don't think about it. No one wants to believe this. But people spend more time talking about my future. My job is to be the best U.N. Ambassador I can possibly be and make sure that people are proud of it. I don't think about the future, and honestly, I don't have time. Between North Korea, Russia and Syria, the last thing I'm thinking about is what I'm gonna do in the future."