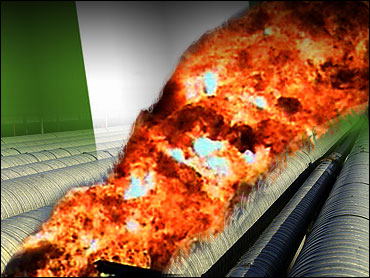 The militant group behind a wave of bombings and kidnappings that spread chaos across Nigeria's oil heartland called Monday on the restive region's armed factions to unite and cripple Africa's biggest petroleum industry.

The Movement for the Emancipation of the Niger Delta, or MEND, also hailed moves by another militant faction to abandon a government peace initiative. MEND said any armed faction in the southern region hoping to force government concessions should band together.

"We call on all genuine militant groups to unite and cripple the oil industry in Nigeria once and for all and stand strong to face a common enemy," the group said in a statement e-mailed to reporters. "The time has come for all breakaway factions to come together and wage war of a different kind in 2008."

Bombings and attacks since early 2006 by the Movement for the Emancipation of the Niger Delta, or MEND, have already trimmed about one quarter of Nigeria's estimated 2.5 million daily barrel crude production.

The group announced a unilateral cease-fire shortly after the May 29 inauguration of new President Umaru Yar'Adua, but later called off the truce. Yar'Adua's government has made some efforts to reach out to militants, but a broad conference focused on peace and development for the Niger Delta has yet to materialize.

MEND said it wasn't part of the ongoing peace efforts, which representatives of ethnic Ijaw fighters said over the weekend they were quitting after several military operation in the Niger Delta, where the crude is pumped in Africa's biggest producer.

Violence is rising again in the region after MEND ended its truce, although nowhere near the levels seen before April elections, when gunbattles of attacks on oil-industry workers were nearly daily occurrences.

MEND, which claims to be represent all the region's ethnic groups, lauded the weekend withdrawal of the ethnic Ijaw group from the peace parley.

Militancy in the Niger Delta is characterized by shifting alliances and criminal and political activity can sometimes be hard to separate. Much of the militants' activities is believed to be funded by the black-market sale of stolen crude oil, or gunrunning.

A top MEND leader was arrested in Angola in recent months on illegal arms dealing charges. MEND itself isn't believed to have a fixed membership, instead incorporating various fighters according to needs and shared interests.

The militants are trying to force the federal government to send more of the oil funds it controls to the Niger Delta region, whose people are deeply impoverished.

Large amounts of oil revenues have been stolen by the region's leaders, many of whom are believed to have links to the militants. The militants are also suspected of helping politicians rig elections.