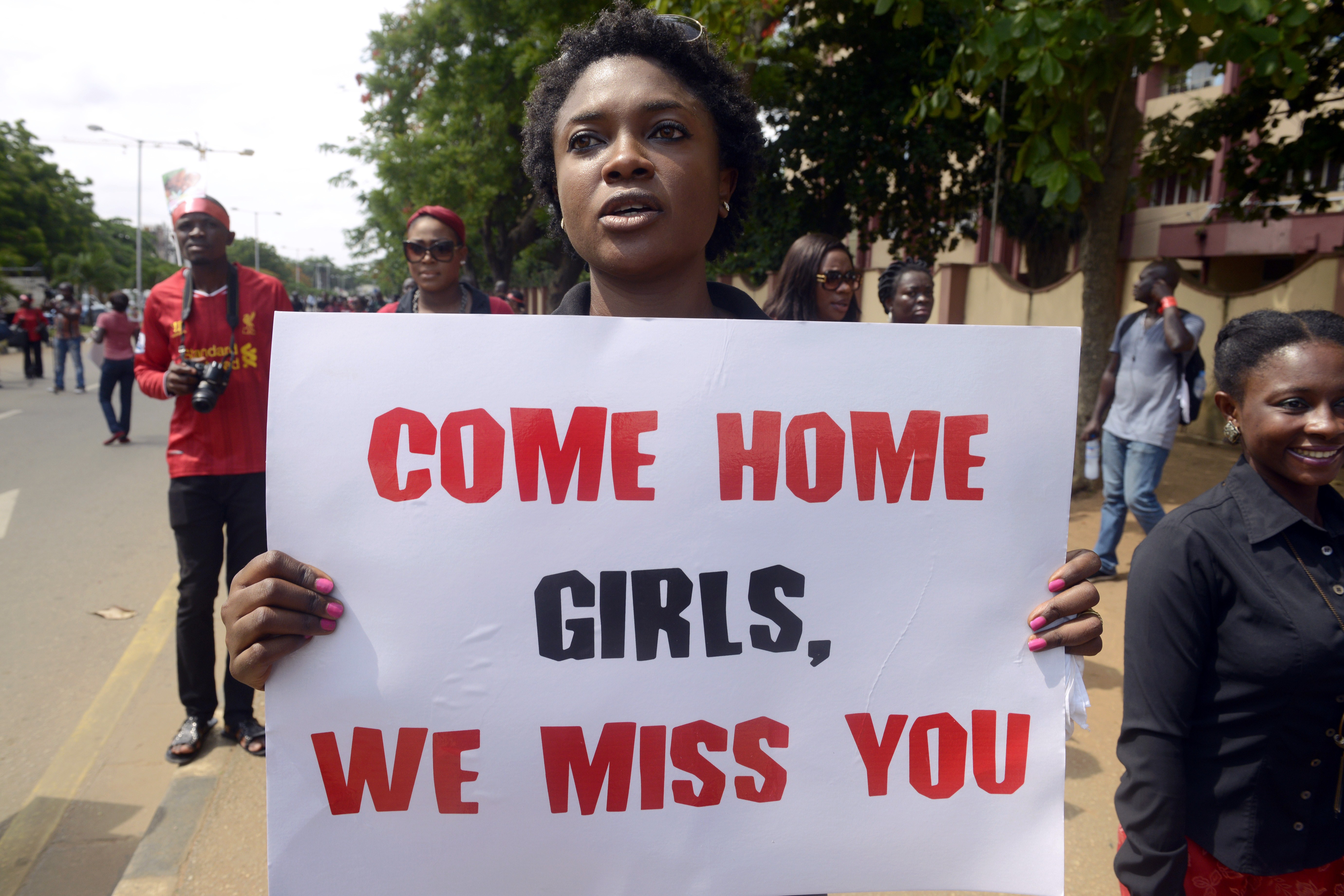 LAGOS, Nigeria -- The girls in the school dorm could hear the sound of gunshots from a nearby town. So when armed men in uniforms burst in and promised to rescue them, at first they were relieved.

"Don't worry, we're soldiers," one 16-year-old girl recalls them saying. "Nothing is going to happen to you."

The gunmen commanded the hundreds of students at the Chibok Government Girls Secondary School to gather outside. The men went into a storeroom and removed all the food. Then they set fire to the room.

What they knew was chilling: The men were not government soldiers at all. They were members of the ruthless Islamic extremist group called Boko Haram. They kidnapped the entire group of girls and drove them away in pickup trucks into the dense forest.

Three weeks later, 276 girls are still missing. At least two have died of snakebite, and about 20 others are ill, according to an intermediary who is in touch with their captors.

Their plight - and the failure of the Nigerian military to find them - has drawn international attention to an escalating Islamic extremist insurrection that has killed more than 1,500 so far this year. Boko Haram, the name means "Western education is sinful," has claimed responsibility for the mass kidnapping and threatened to sell the girls. The claim was made in a video seen Monday. The British and U.S. governments have expressed concern over the fate of the missing students, and protests have erupted in major Nigerian cities and in New York.

The 16-year-old was among about 50 students who escaped on that fateful day, and she spoke for the first time in a telephone interview with The Associated Press. The AP also interviewed about 30 others, including Nigerian government and Borno state officials, school officials, six relatives of the missing girls, civil society leaders and politicians in northeast Nigeria and soldiers in the war zone. Many spoke on condition of anonymity, fearing that giving their names would also reveal the girls' identities and subject them to possible stigmatization in this conservative society.

The Chibok girls school is in the remote and sparsely populated northeast region of Nigeria, a country of 170 million with a growing chasm between a north dominated by Muslims and a south by Christians. Like all schools in Borno state, Chibok, an elite academy of both Muslim and Christian girls, had been closed because of increasingly deadly attacks by Boko Haram. But it had reopened to allow final-year students to take exams.

At about 11 p.m. on April 14, a local government official, Bana Lawal, received a warning via cell phone. He was told that about 200 heavily armed militants in 20 pickup trucks and more than 30 motorcycles were headed toward his town.

Lawal alerted the 15 soldiers guarding Chibok, he said. Then he roused sleeping residents and told them to flee into the bush and the nearby hills. The soldiers sent an SOS to the nearest barracks, about 30 miles away, an hour's drive on a dirt road.

When the militants showed up two hours after the warning, the soldiers fought valiantly, Lawal said. Although they were outnumbered and outgunned, they held off the insurgents for an hour and a half, desperately waiting for reinforcements. One was killed. They ran out of ammunition and fled for their lives.

As dawn approached, the extremists headed for the boarding school.

There were too many gunmen to count, said the girl who escaped. So, even after the students realized the men were Islamic extremists, they obediently sat in the dirt. The men set the school ablaze and herded the girl's group onto the backs of three pickup trucks.

The trucks drove through three villages, but then the car of fighters following them broke down. That's when the girl and her friend jumped out.

Others argued, the 16-year-old remembered. But one student said, "We should go! Me, I am coming down. They can shoot me if they want but I don't know what they are going to do with me otherwise."

As they jumped, the car behind started up. Its lights came on. The girls did not know if the fighters could see them, so they ran into the bush and hid.

"We ran and ran, so fast," said the girl, who has always prided herself on running faster than her six brothers. "That is how I saved myself. I had no time to be scared, I was just running."

A few other girls clung to low-hanging branches and waited until the vehicles had passed. Then they met up in the bush and made their way back to the road. A man on a bicycle came across them and accompanied them back home.

There, they were met with tears of joy.

"I'm the only girl in my family, so I hold a special place and everyone was so happy," the girl said. "But that didn't last long."

The day after, the Defense Ministry put out a statement quoting the school principal, saying soldiers had rescued all but eight of the girls. When the principal denied it, the ministry retracted its statement.

With confidence in the military eroded, the residents of Chibok pooled their money, bought fuel for motorcycles and headed into the dangerous Sambisa Forest. The forest sprawls over more than 23,000 square miles, nearly eight times the size of Yellowstone National Park in the United States, and is known to shelter extremist hideouts.

Mutah Buba joined the search party hoping to find his two sisters and two nieces. They got directions from villagers along the way who said they had seen the abductors with the girls on a forest path. Finally, an old man herding cattle at a fork in the road warned them that they were close to the camp, but that they and their daughters could be killed if they confronted the militants.

The searchers returned to Chibok and appealed to the few soldiers there to accompany them into the forest. They refused, point blank, Buba said. Parents in Chibok ask why they came within a couple of miles of their daughters, yet the military did not.

"What was strange was that none of the people we spoke to had seen a soldier man in the area, yet the military were saying they were in hot pursuit," said Buba, a 42-year-old drawn home to Chibok by the tragedy from Maiduguri, the Borno state capital 80 miles to the northwest.

The military says it is diligently searching for the girls, with extensive aerial surveillance.

"Every information relayed to security agencies has so far been investigated, including the search of all places suspected as a possible hide-away of the kidnapped girls," Information Minister Labaran Maku said Friday.

Many soldiers have told the AP they are demoralized, because Boko Haram is more heavily armed and better equipped, while they get little more than a meal a day.

Some of the kidnapped girls have been forced into "marriage" with their Boko Haram abductors, sold for a nominal bride price of $12, according to parents who talked with villagers. Others have been taken across borders to Cameroon and Chad, they said. Their accounts could not be verified, but forced child marriage is common in northern Nigeria, where it is allowed under Islamic law but not the country's Western-style constitution.

In the meantime, the parents are frantic. Through sobs and jagged gasps for air, the mother of a missing 15-year-old said she had lost confidence in the authorities.

"I am so very sad because the government of Nigeria did not take care of our children and does not now care about our children," said the mother, who spoke on condition of anonymity to protect her daughter. "All we have left is to pray to God to help them and help us."

The mother of six wondered what would happen to her daughter's lofty ambition to become a doctor. She said the girl spent her time caring for the family, and would cook whatever her mother wanted to eat.

"She is my first-born, the best," said the mother, who broke into a scream followed by wails of sorrow. "What am I to do as a mother?"

Spurred by growing national outrage, President Goodluck Jonathan on Friday set up a committee to work out a rescue strategy, and expressed confidence that the military will find the girls.

The only way to get the girls back is through negotiation, according to an Islamic scholar who has mediated the release of previous hostages. The scholar, who remained anonymous because his position receiving messages from Boko Haram is sensitive, said the militants are willing to free the girls for a ransom, but have not specified how much.

The 16-year-old who escaped keeps thinking of her friends, and wondering why she was able to get away while they are still captive. She is at times afraid and at times angry.

"I am really lucky and I can thank God for that," she said. "But God must help all of them ... Their parents are worrying. Every day, everyone is crying."