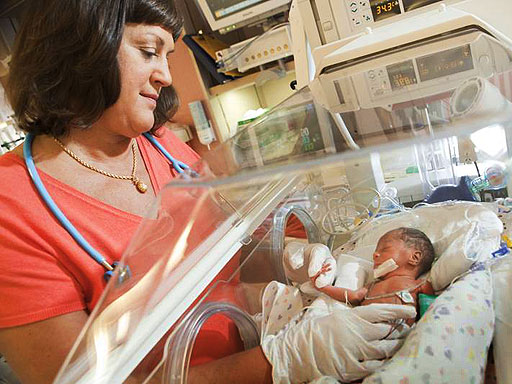 (CBS) Neonatal intensive care doctor Susan Dulkerian knows a little something about the panic parents feel when their child winds up in her care.

Eight years ago, Dulkerian's own son was sent to the NICU after he suffered a seizure shortly after birth.

"It's scary," she says. "Does he have an infection. Seizures can indicate brain injury. All of that was going through my mind."

Luckily, her son's problems were quickly resolved. He hasn't had a seizure since. They never figured out why he suffered then.

Dulkerian's efforts to save new born babies in trouble are being featured in a new series on Discovery Health, which hopes to bring viewers inside her NICU facility at Mercy Medical Center in Baltimore and several other centers.

Tonight's show will feature two babies rushed into the NICU because of their mothers' diabetes.

Little Demetrius was born with sugar problems, respiratory issues and a deformed spine. "I've seen much, much worse, says Dulerkian. But he "was critical enough to die, if we left it alone."

At 12 pounds, baby Angel was born too large. Her heart muscle had grown to aggressively and her blood sugar was dangerously low.

The brain is very sensitive to low glucose," she says. "Their can be brain damage very quickly."

Both children survived and have good chances for success, but as anyone who has been through it can tell you, it's a harrowing ride.

NICU premieres tonight on Discovery Health at 10pm ET/PT. It's a 10-part series.