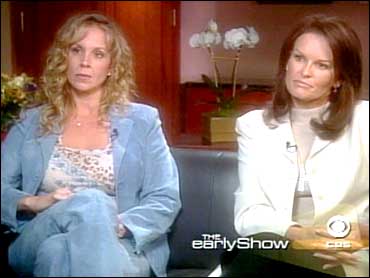 Ten years ago, the bodies of Nicole Brown Simpson and Ron Goldman were discovered brutally stabbed to death outside her condo in Los Angeles.

Two of Nicole's sisters, Denise and Tanya Brown, spoke with The Early Show co-anchor Harry Smith about how they view those events, a decade after that terrible day.

"[At] 6:50, I heard my mother scream, and I had never heard her scream like that before," remembers Denise Brown. "I ran into her bedroom and I said, 'What's the matter?' And she said, 'Your sister's been killed.' It was probably the most horrific thing I had heard in my life."

Tanya Brown says, "The screams in our house, you've never heard anything like it."

The Browns said they initially thought Nicole Brown Simpson had been shot.

"When we found out that she had been killed with a knife, it was like, 'Oh my God! She had so much fear of knives,'" says Denise. "There was only one person who knew that she was so afraid of knives, other than her family. And that was Simpson."

The night of the murders, the Simpsons' daughter, Sydney, had performed in a dance recital. Afterwards, many of the family members had dinner at a restaurant. Denise Brown says, at the time, their door wasn't completely closed to O.J. Simpson, but he wasn't invited for the dinner.

"He's a control freak. He wants control and someone who loses control can become very dangerous," says Brown.

During Simpson's murder trial, photographs were brought forward which suggested that Nicole Brown Simpson had been a victim of spousal abuse. Denise Brown testified about what she saw. Brown said she saw Simpson pick up Nicole and throw her against the wall, then he threw her out of the house.

Since Nicole Brown Simpson's murder, both sisters have worked to raise awareness and help victims of domestic violence.

"There's a safety plan that women need to know and Nicole kind of did it wrong," says Tanya Brown. "She gave back the jewelry and said, 'It's over. It's done.' A women in domestic violence needs to leave secretively. She needs to leave safely and not abruptly. If you know someone who's going through [abuse], speak up."

Years ago, the nation watched the courtroom testimony, transfixed. Then at 10 a.m. on Oct. 3, 1995, the verdict came in.

The jury found O.J. Simpson not guilty of the crime of murder.

Denise Brown says she felt some vindication that Simpson was found liable.

The Browns say they have received some money from Simpson, but nothing close to $33.5 million.

"It wasn't coming to us," explains Denise Brown. "It was going to the estate of Nicole, for the children. For Sydney and Justin. And we never got that, and we won't."

Tanya says, "No penny is going to bring Nicole and Ron back. No penny. It's not about money. Nicole and Ron are dead, and a billion dollars won't bring them back."

"It's very surreal," says Tanya. "Denise and I have very different points of views on our feelings on O.J. She hates him. She can't stand him. With me, I have no feelings. I'm numb towards him. If I see him, it's like I wouldn't even know him. He's like a stranger in this big world of ours. But I don't hate. And I'm not angry, because that hurts me.

Watch The Early Show on Wednesday morning for Harry Smith's talk with the Goldman family, a decade after the loss of their son, Ron.