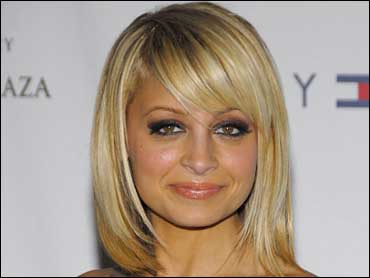 While her best friend Paris Hilton cools her heels in the joint, Nicole Richie is hoping to stay on the outside.

"I'm just keeping my fingers crossed, of course," she said on CBS's "Late Show with David Letterman" Wednesday. "I'm scared also but I'm willing to face whatever consequences come my way and I take responsibility for what I've done."

The star of "The Simple Life" was charged with DUI in February. Police say she was under the influence of booze and an unspecified drug when they stopped her last year.

When asked if prison was a likelihood, Richie told Letterman, "Um, yeah."

Richie has a philosophy for facing up to her missteps.

"I really try and take everything that I go through as a life lesson," she said, "and I try not to make the same mistake twice."

Dressed in a strapless white mini dress, her long blonde hair in a pony-tail, Richie managed to dodge Letterman's many questions about her incarcerated best friend.

Richie said she had not spoken to the heiress since she began her jail term Sunday, but did talk to Hilton in the days leading up to her sentence.

Letterman pressed on, asking if Hilton expressed how she was feeling at the time.

"Just like anyone would feel before they were going to go to jail," said Richie, drawing a laugh from the audience.

Hilton and Richie have been friends since they were little, then had a very public falling out a few years ago. They made up last fall.

"It was actually our first fight. I've been friends with her since I was two years old," she said. "We just kind of grew apart and then we found our way back into each other's lives."

Richie told Letterman that it was Hilton who made the first move in their reconciliation.

"(Hilton) called me to wish me a happy birthday in September," she said.

Letterman didn't want to drop the subject of young Hollywood stars in trouble, though. He asked about Richie's friend, actress Lindsay Lohan, who is currently in rehab after being arrested on suspicion of driving under the influence.

After a long pause, the show's musical director Paul Schaefer shouted out "Objection your honor. The prosecution is badgering the witness."

That earned the bespectacled sidekick a nice round of applause from the audience.

"I can't really speak for anyone else but me," said Richie, after a pause. "I'm 25 and I'm still growing up and I've made some bad choices, just like anyone I'm sure. So now I just have to deal with the consequences. Of course, jail is a not a great consequence but I brought it on myself."

Prior to Richie's interview, Letterman directed a few barbs at Hilton in his opening monologue and the heiress was also the theme of the night's Top Ten List.

Hilton and Richie star in the fifth edition of "The Simple Life Goes To Camp" airing Sunday nights on E!.
By Judy Faber