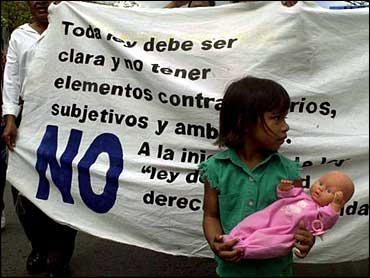 An abortion undergone by a 9-year-old rape victim has touched off an explosive debate in Nicaragua, where reaction to the abortion has outraged the Roman Catholic Church, toppled a Cabinet minister and sparked demands for liberalization of pregnancy laws.

The case began when the girl, daughter of an impoverished Nicaraguan migrant worker in neighboring Costa Rica, was found to be pregnant. A 22-year-old man was arrested on suspicion of raping her.

When hospital officials in Costa Rica seemed to oppose an abortion, the girl's family brought her home with help from the Women's Network Against Violence and sought permission for an abortion here.

Nicaragua is a largely conservative society where Catholic teachings are taken seriously and few pregnancies are ended legally. A law permits only vaguely defined "therapeutic abortions." Government officials even observe a Day of the Unborn Child.

But the idea of a 9-year-old having to give birth shocked many Nicaraguans.

"I have never seen this country debating in the way it did," said Dr. Ana Maria Pizarro, a gynecologist who directs a women's health center.

Television and radio stations were bombarded with calls from opponents and supporters of an abortion for the girl. The government human rights prosecutor urged an abortion; the country's family minister opposed it.

A committee of doctors assembled by the government appeared to waffle, saying the girl's health would be endangered both if she continued the pregnancy or if she had an abortion.

As officials debated, the girl's parents pulled her out of a government hospital, and on Feb. 20 the Women's Network announced she had undergone an abortion.

The fury only intensified.

Cardinal Miguel Obando y Bravo said those involved in the girl's abortion had excommunicated themselves under church law.

That prompted tens of thousands of women in Nicaragua — and supporters in Europe — to sign petitions demanding to be excommunicated themselves.

Health Minister Lucia Salvo, who had opposed the abortion, resigned March 13, complaining that President Enrique Bolanos did not support her in a dispute with her own deputies over the issue.

Passions were so inflamed that the nation's Catholic bishops issued an open letter comparing abortions to terrorists' bus bombs. Their main goal was to dissuade Nicaragua's congress, which is studying the abortion law, from making abortions easier to get.

The current law is vague about when a "therapeutic abortion" is allowed. Three medical personnel — not necessarily doctors — have to approve it, but the law gives little guidance about what conditions they should look for.

All sides agree early pregnancy is a problem.

"This situation of the pregnancy of a girl is not rare in Nicaragua," said Dr. Rafael Cabrera, another gynecologist. He said 30 percent of pregnancies are in girls younger than 19, and "you often see pregnancies between 10 and 15 years."

But Cabrera, who heads the Nicaraguan Pro-Life Association, contends the current law is sufficient to deal with unusual cases.

Abortions are available despite the law.

Pizarro, who heads the Si Mujer health center, said a government study in 1996 estimated 36,000 abortions a year are performed in this country of 5 million people. She said studies she did in the 1980s found that unsafe, illegal abortions were among the leading causes of death for Nicaraguan women.

The government's Bertha Calderon Hospital for women approved 509 of 860 requests for therapeutic abortions between 1986 and 1991, Pizarro said. Since then, with more conservative governments in power, it has performed only 10.