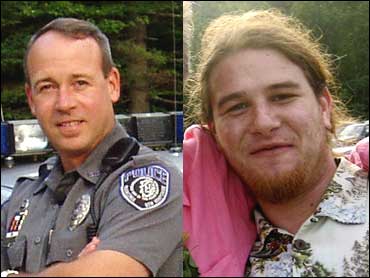 Liko Kenney, described by friends as a free-spirited "hippie kid," had a history of bad blood with police Cpl. Bruce McKay. So there was the potential for trouble when a traffic stop brought them together again.

Within minutes of the Friday stop, both were dead, dividing this town's 924 residents between those who see McKay as a fallen hero and those who considered him a bully with a badge.

Beyond that, there's little agreement about the tragedy in Franconia, where local Olympian Bode Miller — Kenney's cousin — is royalty. His image appears on posters, signs and keepsakes all over town.

Authorities say McKay, 48, stopped Kenney, 24, for speeding, and Kenney asked to deal with a different officer and drove away.

By the time McKay caught up about a mile down the road, Kenney was in a frenzy, according to his friend and passenger, Caleb Macauley.

"I've never seen anyone so scared in my life," Macauley told WMUR-TV.

McKay forced him off the road and pepper-sprayed him. Kenney then shot McKay four times and drove over him.

Gregory Floyd, a passing motorist and ex-Marine who saw it all, grabbed McKay's gun and shot Kenney to death when he refused to put his gun down. Authorities quickly ruled the killing justified.

McKay, who had a 9-year-old daughter, was to have been married in July atop Cannon Mountain, where Bode Miller learned to ski. Instead his funeral will be held at the mountain.

As many as 6,000 officers from throughout the country are expected to attend Thursday's funeral, but in this close-knit mountain valley, where the Kenney family's roots run deep, at least one town may hold back.

Plans to send two fire department vehicles from neighboring Easton triggered a heated debate at the selectmen's meeting Monday night. Chairman Paul White, who is married to Kenney's cousin, moved to keep them away in protest.

Liko Kenney grew up on his grandparents' rustic tennis camp in Easton, where the extended family still lives. Liko's parents own a coffee plantation in Hawaii, and he followed their seasonal migrations: the islands in winter, the White Mountains in summer.

"He was kinda just a happy, hippie kid. He'd do anything to help anyone," said Holly Hayward, 48, who said she'd known Kenney his whole life.

Friends and family called Kenney a free-spirited outdoorsman who loved all-terrain vehicles and had issues with authority. Court records show he could be volatile even with his own family. In January 2003, an aunt, Larisa Kenney, sought a restraining order against her nephew, then 19. In a handwritten letter, she told the court Liko had frightened her by chain-sawing trees near her cabin, sending one crashing onto her roof as she slept. When she confronted him, she said Liko exploded — shouting, grabbing her and then following her on his ATV as she ran to safety at a relative's home.

Just weeks later, Liko Kenney had a violent run-in with McKay, who had followed tire tracks into an isolated parking area. Court documents say it took three officers to subdue Kenney, who tried to escape three times, once while cuffed and shackled. One officer said Kenney grabbed McKay in the groin and that McKay reacted by punching Kenney in the face. Kenney's family and many in town say McKay broke Kenney's jaw that night, but Grafton County Attorney Rick St. Hilaire said Kenney's jaw was not broken.

Kenney could have gone to prison after pleading guilty to resisting arrest and assaulting McKay. But he got 15 days in jail, time served, when McKay asked for leniency, according to St. Hilaire.

Bill Kenney, 56, said the run-in changed Liko, and that his nephew started carrying a weapon because he feared McKay. Other residents say they found him intimidating as well.

"McKay had an attitude, he was rough on people," said florist Jean McLean, 53, who remembers once asking McKay to leave after he tried to shoo away teenagers playing Hacky Sack in front of her store. She called the killings "vigilante justice."

McKay was one of three full-time officers in the department and prosecuted some of its smaller cases. One man, Timothy Stephenson, sued McKay in 2005, alleging that he used his prosecutor's role to settle scores.

The men settled the case last year, with neither admitting blame.

Bode Miller also chafed against McKay, telling Sports Illustrated that he contested a 2005 speeding ticket in part to antagonize the officer.

"We don't harass people. He did his job, he did it well, everybody was treated the same. He was very knowledgeable and very professional, a dedicated police officer," Montminy said.

Pastor Gary Hart of Franconia Community Church of Christ said McKay's image as a law-and-order man in an old hippie town may have distanced him from others.

"Most of the time people saw him he was in his patrol vehicle, he was in uniform, he was stopping people on the road for speeding. And once you get a reputation, it's almost impossible to change it," said Hart, who does some police chaplain work.

Hart said he was impressed when McKay responded to a complaint he once made about a noisy wedding reception.

"So when people tell me he was so difficult, that hadn't been my experience," Hart said.