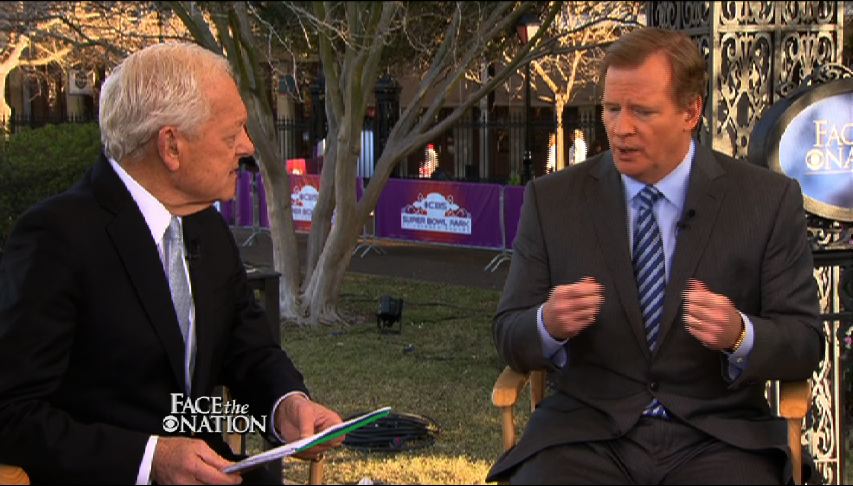 "I have twin daughters, just like the president, and I'm concerned when they play any sport," Goodell said in New Orleans, in a special Super Bowl edition of the show. "The second-highest incidents of concussions is actually [in] girls' soccer. So what you have to do is make sure the game is as safe as possible."

Facing lawsuits from thousands of former players who allege the league did not adequately warn them of the potential for brain injuries, Goodell deferred to medical experts on whether there's a connection between the sport and life-altering brain damage. But, he continued, the league has gone to great lengths to address the possibility, "not just to make football safer at the NFL level, but all levels, and other sports."

Asked whether the league was guilty, as the lawsuits claim, of covering up the potential for severe brain damage in the sport, Goodell said "no," arguing the NFL has "led the way" on "learning more about brain injury." He said the league this morning announced it was putting $30 million toward a joint initiative with General Electric for research about "how do these injuries occur, how do we prevent them, and how do we diagnose them, with some leading companies."

Beginning next season, the league also plans to have an independent neurologist on the field at every game to examine injured players' potential for concussion and brain injury, Goodell said. Changes to the game's rules are also on the table: "We see techniques that we think can lead to injuries, we're going to get them out of the game," he said. "One thing that we're going to look very close at this year is low blocks, and can those low blocks cause injuries that can cause players to miss games and miss seasons?"

CBS Sports' Phil Simms, who along with Jim Nantz will act as commentator for today's Super Bowl championship, said because of the changes Goodell has spearheaded, he "would not hesitate now" to let his kids play football. "It's changing at every single level," he said. "We're going to see a new generation of players that get through the NFL, and their health is going to be so much better than some of the generations we've seen before."

Change, though, CBS Sports' Shannon Sharpe offered, "is always met by resistance. You look at integration... you look at civil rights. It was met with resistance. But as we look back, we realize that was the right thing to do. I think 10, 15 years from now, all the players will sit back and say, 'You know what? I didn't like what the commissioner did at the time. But it was the right thing to do.'"

Goodell, for his part, said he "couldn't be more optimistic" about the future of football as an American pastime, citing the game's always-evolving nature: "Through the years, through the decades, we've made changes to our game, to make it safer, to make it more exciting, to make it a better game for the players, for the fans, and we have done that in a very calculated fashion," he said.

Heading into tonight's game, Goodell predicted a "close game" between the Baltimore Ravens and the San Francisco 49ers, and joked of the dueling brothers, head coaches Jim and John Harbaugh, "a Harbaugh is going to come out on top." Nantz agreed that while he typically has a "gut feeling" about who will claim the famed Lombardi Trophy each year, "in this case, I don't at all."