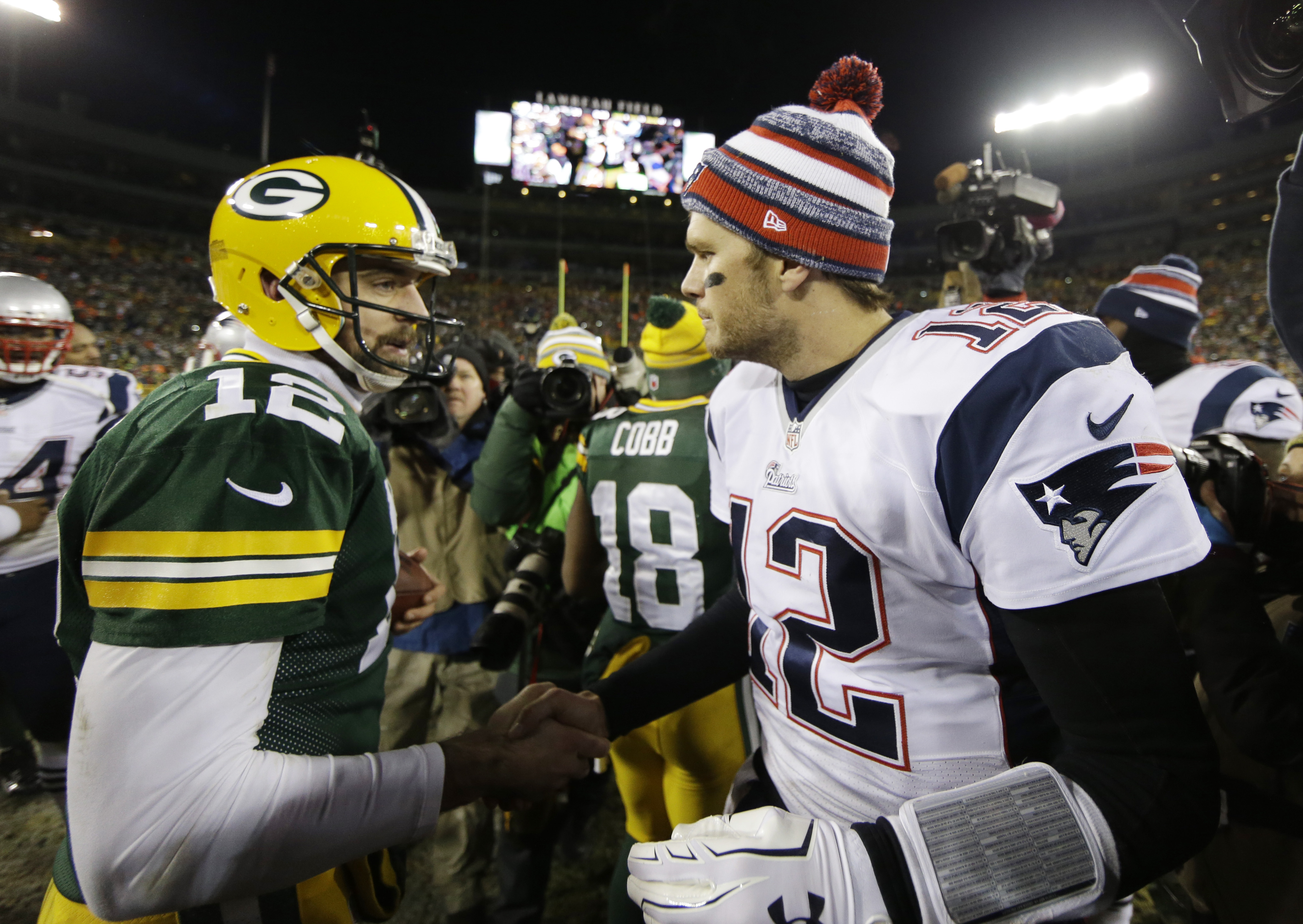 GREEN BAY, Wisconsin - Aaron Rodgers threw for two touchdowns and Eddie Lacy ran for key yards in the fourth quarter as the Green Bay Packers fended off the New England Patriots 26-21 Sunday in a high-profile matchup between Super Bowl contenders.

Rodgers bested Tom Brady in the first meeting between the star quarterbacks as starters. Rodgers connected with Richard Rodgers and Jordy Nelson for long touchdowns.

Leading by five, the defense held firm late for the Packers (9-3). Mike Daniels and Mike Neal combined to sack Brady on third down for a 9-yard loss, and kicker Stephen Gostkowkski pushed a 47-yard field-goal attempt wide right with 2:40 left.

The Packers sealed it after Rodgers converted to Cobb on third-and-4 with the Patriots out of timeouts.

Brady finished with two touchdown passes to Brandon LaFell for New England (9-3), which had its seven-game winning streak snapped. The second score came from 15 yards early in the fourth quarter to get within 23-21.

The lead could have been wider for the Packers if not for some hiccups in the red zone.

Green Bay settled for four field goals from Mason Crosby of 35 yards or less, including a 28-yarder to make it a five-point lead with 8:41 left. That kick came after rookie Davante Adams dropped a potential touchdown pass on third-and-5 from the New England 10.

TAMPA, Florida - Andy Dalton ran for one touchdown and threw to A.J. Green for another, helping the Bengals overcome numerous mistakes.

Dalton shrugged off three first-half interceptions, and the Bengals (8-3-1) weathered 10 penalties and an ill-advised onside kick that cost them momentum after taking the lead in the second half to win on the road for the third consecutive week. That's a franchise first that seemed improbable following a lopsided home loss to Cleveland a month ago.

The Bengals lead the tightest division race in the NFL, with a 1½-game lead over each of their AFC North rivals - all of whom lost.

Tampa Bay (2-10) threatened in the closing minutes. However, a 21-yard completion that would have put the Bucs in field goal range was overturned after a replay review confirmed the Bucs had 12 men on the field on the play.

The ball was moved back to the 46, an additional 14 seconds were added to the clock, and Tampa Bay turned over the ball on downs.

Following a pass interference call against Anthony Levine in the end zone, Rivers hit Royal to conclude an 80-yard march to the Chargers' third straight win.

Baltimore (7-5) lost at home in November for the first time since 2009. The Ravens were 11-0 all-time at home against West Coast teams.

Rivers went for 34 for 45 for 383 yards and three touchdowns, two to Keenan Allen.

PITTSBURGH - Drew Brees threw five touchdowns for the ninth time in his career as the Saints dominated the sloppy Steelers.

Kenny Stills caught five passes for a career-high 162 yards and a score as the Saints (5-7) ended a three-game losing streak by restoring a little bit of respectability and a sense of order to the NFC South.

Ben Roethlisberger passed for 435 yards and two touchdowns, but also threw two interceptions for the Steelers.

Orton put the Bills ahead 7-3 with a 3-yard pass to Chris Hogan. Buffalo's defense scored on the next play from scrimmage when Hughes stripped the ball from running back Terrence West, and returned the fumble 18 yards.

It was too deep of a hole for Browns rookie quarterback Johnny Manziel to dig out of. Taking over with 12:01 left after starter Brian Hoyer threw his second interception, Manziel capped an eight-play, 80-yard drive with a 10-yard run that cut Buffalo's lead to 20-10.

The Bills (7-5) won their second straight. Cleveland (7-5) lost for only the second time in six games.

ATLANTA - Julio Jones had a career day, catching 10 passes for 189 yards and a touchdown to keep the Falcons in first place in the NFC South.

Arizona (9-3) still leads the NFC West after its second straight loss, but its lead over defending Super Bowl champion Seattle dwindled to a single game.

More troubling for the Cardinals, they had gone more than 11 quarters without an offensive touchdown until a meaningless score with just over a minute remaining.

Steven Jackson broke off a 55-yard run - his longest since 2009 - to set up a touchdown on the Falcons' opening possession.

Jones hauled in a 32-yard scoring pass, and Matt Bryant kicked a career-best five field goals for the Falcons (5-7), who matched New Orleans' 35-32 win at Pittsburgh to remain tied for the top spot in the NFC South.

HOUSTON - Ryan Fitzpatrick threw for a franchise-record six touchdowns and DeAndre Hopkins had a career-best 238 yards receiving and two scores. Fitzpatrick returned to the lineup after being benched for two games for Ryan Mallett, who suffered a season-ending chest injury last week.

J.J. Watt helped out in the win, too. He had his third touchdown reception, two sacks, forced and recovered a fumble for Houston (6-6).

Tennessee's Zach Mettenberger injured his right shoulder playing behind a makeshift offensive line missing three starters. Jake Locker took over in the third quarter and threw for 91 yards with a touchdown and two interceptions for the Titans (2-10), who have lost six straight.

The Rams (5-7) scored touchdowns on their first five possessions, got a field goal on the sixth midway through the second quarter to top their previous best scoring total for any game this season. The 38-point halftime lead was the largest in franchise history, one more than against Green Bay in 1980.

The Raiders (1-11) were never competitive and committed five turnovers.

He did all that while Robert Griffin III, the No. 2 overall pick behind Luck in 2012, watched from the sideline. Griffin's replacement, Colt McCoy, was 31 of 47 for a career-best 392 yards and three TDs, also a career high.

MINNEAPOLIS - Adam Thielen and Everson Griffen each returned blocked punts by Minnesota for touchdowns, the fifth time in league history one team had two in the same game.

Teddy Bridgewater threw for two scores without a turnover, and Griffen had two of the four sacks by the Vikings (5-7) against Cam Newton.

Despite entering the week just a half-game out of first place in the struggling NFC South, the Panthers (3-8-1) again stumbled out of their bye. They're 0-4 under coach Ron Rivera following the annual in-season week off, and have lost six in a row overall this season.

This was the seventh-coldest game in Vikings history, with a kickoff temperature of 12 degrees. They're playing outside this year for the first time since 1981.

JACKSONVILLE, Florida - Josh Scobee kicked a 43-yard field goal with 28 seconds remaining, and the Jaguars rallied from a 21-point deficit.

The Jaguars (2-10) ended a four-game losing streak and dealt the Giants (3-9) a seventh consecutive loss that could raise more questions about coach Tom Coughlin's future.

The Giants dominated the first half, scoring 21 points in the second quarter and looking like they would notch their first victory since early October.

But after the break Geno Hayes forced Eli Manning to fumble and teammate J.T. Thomas recovered in the end zone.

Rookie Aaron Colvin returned a fumble 41 yards for a touchdown in the fourth period. It was the first time in franchise history Jacksonville scored two defensive touchdowns in the same game.