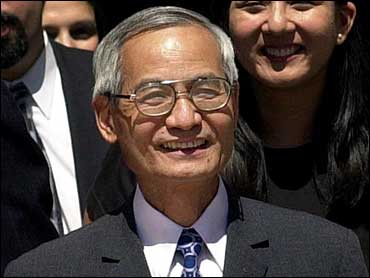 Wen Ho Lee, the former nuclear weapons scientist once suspected of being a spy, settled his privacy lawsuit Friday and will receive $1.6 million from the U.S. government and five news organizations in a case that turned into a fight over reporters' confidential sources.

Lee, a Taiwanese-American, will receive $895,000 from the government for legal fees and associated taxes in the 6 1/2-year-old lawsuit in which he accused the Energy and Justice departments of violating his privacy rights by leaking information that he was under investigation as a spy for China.

The Associated Press and four other news organizations have agreed to pay Lee $750,000 as part of the settlement, which ends contempt of court proceedings against five reporters who refused to disclose the sources of their stories about the espionage investigation.

The payment by AP, The New York Times, the Los Angeles Times, The Washington Post and ABC is the only one of its kind in recent memory, and perhaps ever, legal and media experts said.

The companies said they agreed to the sum to forestall jail sentences for their reporters, even larger payments in the form of fines and the prospect of revealing confidential sources.

"We were reluctant to contribute anything to this settlement, but we sought relief in the courts and found none," the companies said. "Given the rulings of the federal courts in Washington and the absence of a federal shield law, we decided this was the best course to protect our sources and to protect our journalists."

The statement noted that the accuracy of the reporting itself was not challenged.

The government agencies did not admit that they had violated Lee's privacy rights.

Lee was fired from his job at the Los Alamos National Laboratory in New Mexico, but he was never charged with espionage. He was held in solitary confinement for nine months, then released in 2000 after pleading guilty to mishandling computer files. A judge apologized for Lee's treatment.

Two federal judges held the reporters in contempt for refusing to reveal their sources to Lee. The journalists had argued that he could obtain the information elsewhere.

CNN, in a separate statement, said it declined to join in the settlement "because we had a philosophical disagreement over whether it was appropriate to pay money to Wen Ho Lee or anyone else to get out from under a subpoena."

The reporters had appealed the contempt rulings to the Supreme Court. The justices recently delayed a decision on whether to take up the reporters' case after being told a settlement was near.

Lucy Dalglish, executive director of the Reporters Committee for Freedom of the Press, called the payment unusual and perhaps unprecedented.

"I'm certainly not happy about this, but I'm not sure I could have dreamed up a better result," Dalglish said. "On the positive side, it appears that this result will allow these reporters to continue to protect their sources."

The settlement underscores the need for a federal law that would shield reporters from having to disclose their sources, she said.