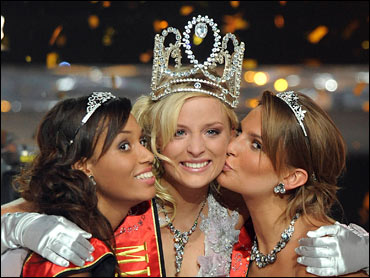 Newly crowned Miss Belgium speaks several languages - including French, English and Czech - but it seems that doesn't count for much when she doesn't speak Dutch.

After she failed to answer a question in elementary Dutch and switched to French during Saturday night's competition, 20-year-old Alizee Poulicek was booed by some of the 3,400 fans in Antwerp, the heart of Dutch-speaking Flanders.

In a country that has been without a government for nearly 200 days because of continued strife between Dutch- and French-speaking parties, the beauty queen's linguistic abilities has taken on larger significance.

"Miss Belgium is not 'tweetalig,'" wrote the Francophone paper La Libre, using the Dutch word for "bilingual," to highlight ever-increasing Flemish demands that all Belgians in the public eye should also speak the majority language.

Dutch-speaking Flemings make up 6 million of the 10.5 million Belgians; most of the rest are Francophones, although there is also a small German-speaking community in the east of the country.

After Belgium gained independence from the Netherlands in 1830, French dominated political and economic life. It is only since World War II that Dutch speakers from the north have started turning their demographic dominance into effective power. For the past three decades, all prime ministers have been Flemish, though all also spoke French.

Northern Flanders and southern Wallonia have gained greater autonomy, but many in Flanders still pounce on every perceived linguistic slight.

Poulicek now knows that. The daughter of a Czech father and a Belgian mother, she lives in the French-speaking city of Huy. She spent half her life in the Czech Republic, returning to Belgium just six years ago. Living in the south, she has had little need to speak Dutch.

"I have to try, learn more," she told VRT television in halting Dutch. She continued in French: "I spoke almost no Dutch when I started this adventure."

For Darlene Devos, organizer of the Miss Belgium contest, it could have been a lot worse.

"I don't worry about this too much. It is the least painful thing," she said. "I would consider it different if they had said 'Miss Belgium is an ugly girl.'"