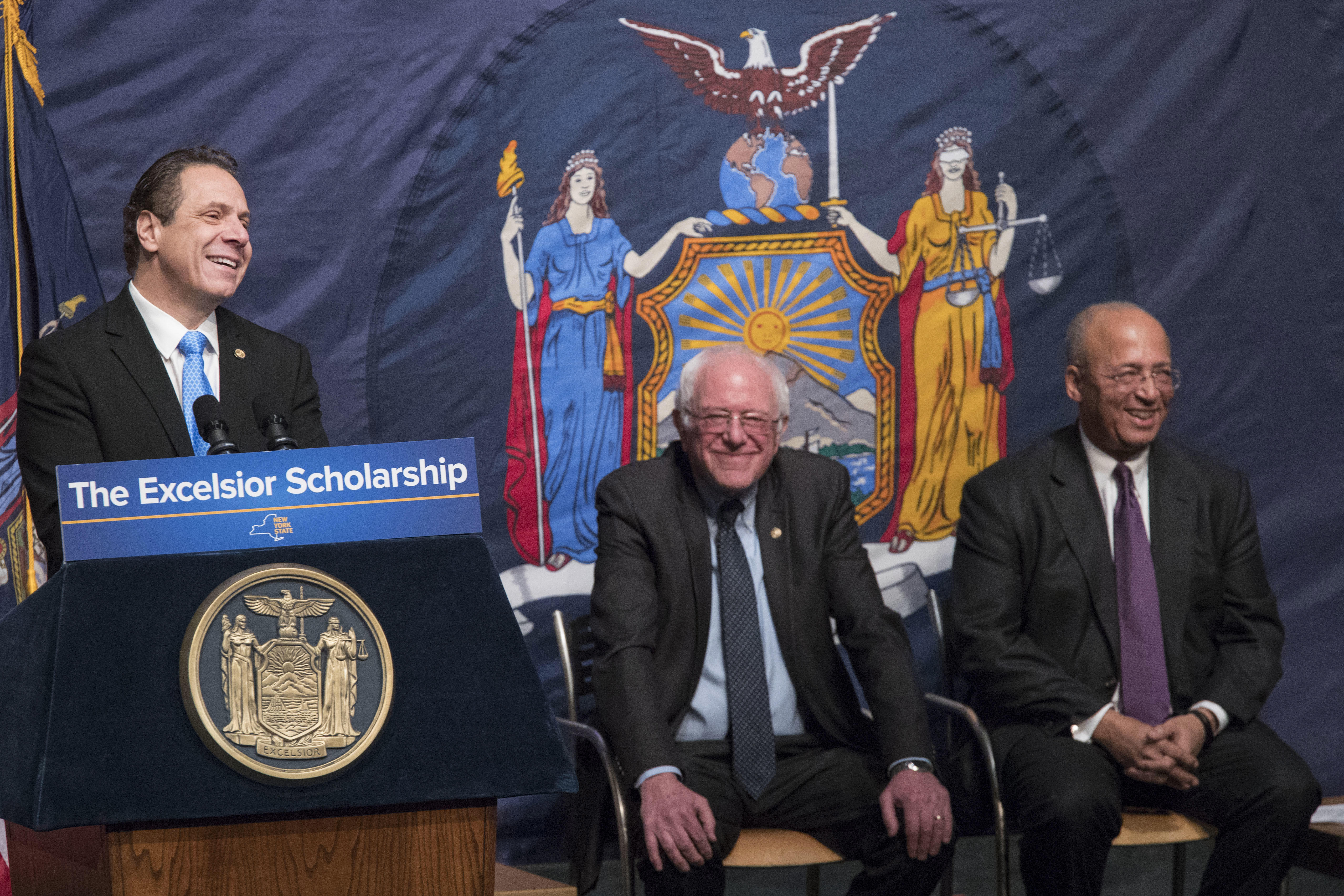 NEW YORK -- Hundreds of thousands of New York students would be able to attend college for free under a proposal announced by Gov. Andrew Cuomo to make state universities tuition-free for residents earning $125,000 or less.

The Democrat unveiled his plan Tuesday at LaGuardia Community College in Queens alongside U.S. Sen. Bernie Sanders of Vermont. Sanders, who pushed for free tuition at all U.S. public colleges during his Democratic presidential campaign, called Cuomo’s proposal “revolutionary.”

“It should be a wake-up call to this nation,” Cuomo said, “to say if you really want to be competitive globally, we have to have the best educated workforce, and that means we have to have college for every child, man or woman who wants to attend.”

But many questions remain about how much it will cost, how it will affect one of the country’s largest public college systems and whether other states will follow suit.

The following Q&A answers some of the questions many have about the proposed program.

A: Full-time New York students whose families earn less than $125,000 a year would pay no tuition to attend two- or four-year colleges in the State University of New York or City University of New York systems. The plan, if approved by state lawmakers, would be phased in over three years, beginning this fall for residents making up to $100,000 a year. The income threshold would increase to $110,000 in 2018 and $125,000 in 2019.

Q: So college would be free?

A: No. Students wouldn’t have to pay the $6,470 yearly cost of tuition ($4,350 for two-year programs), but they’d still have to pick up the cost of room and board if they live on campus ($12,590), along with fees ($1,590) and books. They would also have to graduate on time, meaning in two years for an associate degree and four years for a bachelor’s, if they want to avoid tuition bills.

Q: How much will this cost?

A: Cuomo’s office estimates the state’s cost at $163 million a year once the program is fully phased in, a figure that’s seen by some critics as too low.

“If it costs so little, why haven’t we done it before?” asked Assemblywoman Deborah Glick, a Manhattan Democrat who chairs the Higher Education Committee.

More financial detail may come when the governor releases his budget proposal later this month, but his administration says the program will leverage the state’s existing aid programs, particularly the Tuition Assistance Program, which provides nearly $1 billion in grants to students with taxable incomes of up to $80,000 a year. Under Cuomo’s program, students would still receive TAP, along with any federal grants, and the state would pay the tuition difference.

Q: Won’t this create a rush on SUNY/CUNY schools, possibly making it more difficult to get accepted?

A: SUNY leaders say it’s too soon to estimate the impact on applications and enrollment, but the Cuomo administration says it’s confident the 64-campus, 440,000-student system can absorb what it projects will be a 10 percent enrollment increase. The system remains selective, though, and SUNY said its academic standards aren’t expected to change.

A: Yes and no. The program doesn’t cover tuition for colleges outside SUNY and CUNY. Operators of those schools, though, say leaving them out of the college affordability discussion could leave them at a disadvantage when it comes to attracting applicants in a highly competitive landscape.

“There will be a real pull that SUNY and CUNY have on students that our not-for-profit privates will not always be able to match,” said Mary Beth Labate, president of the Commission on Independent Colleges and Universities.

More than 490,000 students are enrolled in the state’s more than 100 private, not-for-profit colleges. The schools provided $5.1 billion in financial aid to their students in 2014-15 and directly employ 196,300 people, Labate said.

The independent colleges would rather see the state expand TAP, increasing awards or raising the income threshold, which Labate said would preserve student choice because the grant follows the student.

The requirement that federal aid, as well as state aid, is factored in doesn’t sit well with advocates for poor students, who say they’ll be left with less to pay for transportation, food and housing.

Q: Will this idea spread?

A: “If New York state does it this year, mark my words, state after state will follow,” independent Vermont U.S. Sen. Bernie Sanders said when Cuomo announced the program this week.

Sanders made tuition-free public higher education a key proposal of his Democratic campaign for president, and Hillary Clinton picked up on it as the Democratic nominee, but Republican nominee Donald Trump had different ideas about how to make college affordable. Trump, who won the election, said he wants to work with Congress to make sure colleges only get access to certain federal tax breaks and other benefits if they “make good-faith efforts to reduce the cost of college and student debt.”

Tennessee and Oregon have enacted programs to cover residents’ tuition costs at community colleges, but New York’s would be the first statewide plan to cover four years of tuition, Cuomo’s office said.