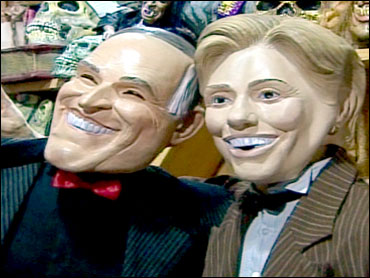 After 19 months of primary campaigning, that seems to be the attitude of the nation's voters. A year ago, three New Yorkers - Republican Rudy Giuliani, Democrat Hillary Rodham Clinton and independent Michael Bloomberg - loomed large in the presidential sweepstakes. With Clinton's departure from the race, they officially have gone 0-for-3 - a shocking bagel hole for the Big Apple.

In January 2008, Clinton and former New York Mayor Giuliani were seen as the clear front-runners of their respective parties. They had the big names, the big money and big leads over their rivals.

Waiting in the wings was Bloomberg, a Democrat-turned-Republican-turned-independent and billionaire mayor who seemed ready to bet a chunk of his personal fortune on a third-party bid.

For all those advantages, the Empire State contingent wound up with zilch.

"Last fall, it clearly looked like it was going to be Rudy and Hillary, and in the end, our candidates did about as well as our baseball teams," said Doug Muzzio, a politics professor at Baruch College in New York.

Those teams, the New York Yankees and New York Mets, are second-to-last in their respective divisions and trail the top teams by a half dozen games.

But at least they're still playing.

Whether it's winning or losing, baseball or politics, New Yorkers have proven at least one thing: They know how to spend money. Gobs of it.

Clinton spent about $212 million and counting on her 17-month odyssey, just edging out the Yankees payroll of $209 million for this season and far surpassing the New York Mets' $138 million. The Giuliani campaign was a comparative bargain at $64 million, though he arguably had the least to show for it: a single delegate that he never actually received because he did not survive the primaries.

Bloomberg's unrealized presidential effort was easily the cheapest. He probably saved a small fortune by deciding not to run, though he did spend undisclosed sums on polling and travel around the country.

After months fueling speculation that he would throw his bank account into the ring, Bloomberg decided against it, though he oddly referred last week to a time "during my presidential run."

If it's difficult to remember Bloomberg as a presidential candidate, you need a history book to look up the last time a president came from New York: Franklin Delano Roosevelt.

So what's wrong with the latest incarnation of New York candidates?

Absolutely nothing, according to Ed Koch, the three-time former mayor of New York.

"Normally there is a love-hate relationship, but I think love is in the ascendancy now as far as the rest of the country and New York," Koch said. "We did very well, and I'm very grateful to the people of the United States for being so supportive of New Yorkers."

Koch, a Clinton supporter, said she came awfully close and lost mostly because presumed Democratic nominee Barack Obama was such an impressive candidate.

"Once the race started, you saw him up there and the way he responded and was received by crowds, from the very beginning he looked like the winner," said the ex-mayor.

Other New Yorkers console themselves by saying the state's recent losses shouldn't really be counted because, c'mon, two of the candidates aren't "real" New Yorkers anyway.

Bloomberg came from Boston. Clinton came from Illinois via Arkansas and Washington, D.C. Giuliani, at least, was born in Brooklyn and raised on Long Island.

"You have to be born and bred there," argued Muzzio. "Does Bloomberg sound like a New Yorker? No, he's a Red Sox fan. Hillary almost won the nomination but she ain't a New Yorker either. I think the results say less about New York than about three individuals and their personalities."
By Devlin Barrett