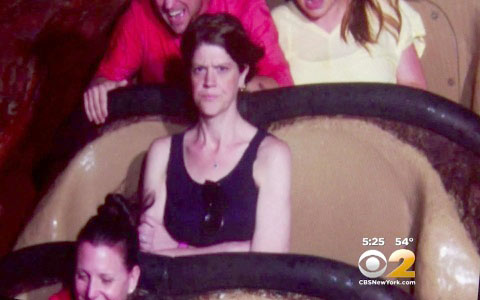 ORLANDO, Fla.-- An unhappy face at the happiest place on earth had social media buzzing this week.

A Syracuse woman became an internet sensation after her expression on a Disney World ride went viral.

As CBS New York reports, most people know her as "the angry Splash Mountain lady" but her family and friends call her Jordan Alexander.

Alexander said all she wanted was to go on Splash Mountain with her husband Steven, but at the last minute he decided to sit out.

"It was a long day. I had bronchitis, I had a crying baby, and my husband informed me that he doesn't have it in him to ride my favorite ride," she explained.

Jordan decided to give a humorous, but harsh stare directly at her husband.

"I kind of practiced it the whole way, and by the time we got to the last drop I didn't know where the camera was and so I just guessed and looked over and took the picture and that was that," she said.

Her husband posted the picture online saying, "I wouldn't go on Splash Mountain with my wife."

"When she first showed me the photo I just lost it. I was like did you coordinate this with them? Because it was so perfect," Steven Alexander said.

Only a week online and the photo has already made a splash. Jordan's face has become a photo-shopping star. She's been photo-shopped at a Bernie Sanders rally, she went skydiving, and her face was even replaced by the infamous grumpy cat.

"I think it's great people are taking it and having fun with it. I think some of the photo-shops are absolutely hilarious," she said.