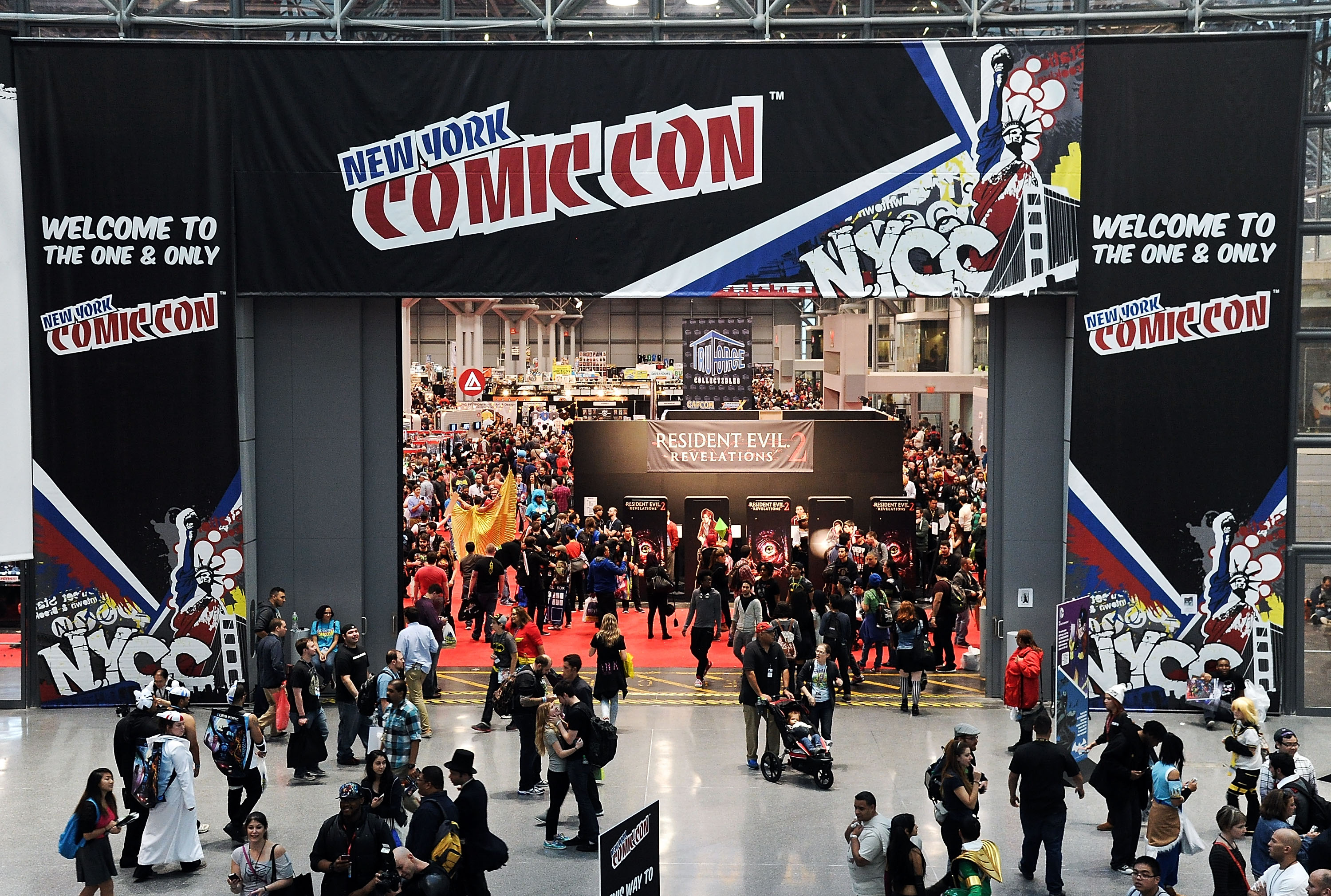 New York Comic Con 2014 kicked off Thursday with some 800 exhibitors, 400 panels, 600 artist signings, cosplayers and practically everything in between. Oh, and there were a few comic books, too.

What started in 2006 with just 15,000 attendees has ballooned to 150,000 guests from all over the world spread across four days at the Jacob Javitz Center in New York. There's a giant art gallery and comic display, new video games and autograph signings galore from the likes of Gillian Anderson, Giancarlo Esposito, Hulk Hogan, William Shatner, Patrick Stewart and Lucy Lawless.

And there are plenty of entertainment highlights to go around. Because New York Comic Con isn't just about comics.

It's already shaping up to be a star-studded affair. Thursday included an Adam West Batman tribute and special spotlight on "Doctor Who." That same day George Clooney surprised Comic Con attendees when he popped up onstage for Disney's "Tomorrowland" panel. He sat alongside director-producer Brad Bird and screenwriter-producer Damon Lindelof, along with Hugh Laurie, Britt Robertson and Shiloh Nelson. They helped reveal the first look at the May 2015 movie release.

Marvel is celebrating its 75th anniversary with a series of panels, a commemorative book and more through the long weekend.

"They look pretty spry for 75. They're getting around pretty good," joked Lance Fensterman, show manager of New York Comic Con. "They're swinging from buildings and scratching people with their claws."

Movie lovers are also wondering if the studio will reveal any news as has been the case with the International Comic-Con in San Diego. Will Marvel announce a third "Thor" film, or give any updates on a potential "Doctor Strange" movie? One thing we do know is that Marvel and Netflix will host an event surrounding its "Daredevil" series starring Vincent D'Onofrio as villain Wilson Fisk. The 13-episode series -- one of four originals Marvel is developing for Netflix -- will begin streaming next year.

Marvel isn't the only one celebrating a landmark this year. Batman is also marking 75 years, and a few panelists will be at the convention to reminisce about the Dark Knight, including Blair Herter, Geoff Johns, Greg Capullo, Jim Lee, Kevin Conroy, Neal Adams and Scott Snyde

Cast members from "The Karate Kid" will gather Sunday for their 30th anniversary panel reminding us of that "Wax on, wax off" technique we learned back in 1984. Expect to see Billy Zabka, Martin Kove and Ralph Macchio in attendance.

Buzz will build around some other TV series as well. The cast and producers of AMC's hit zombie series, "The Walking Dead," will be on hand to introduce new teaser and chime in on upcoming fifth season. Len Wiseman, Lyndie Greenwood, Mark Goffman and Orlando Jones will attend a Q&A for the hit Fox series "Sleepy Hollow," and stars of Fox's "Gotham" show will also answer questions from fans.

Films have started becoming a bigger focus at the New York edition, too. Michael Keaton and Edward Norton will drum up buzz for their new black comedy "Birdman," about an aging actor famous for portraying a superhero. And creators of props from the upcoming "The Hobbit: The Battle of the Five Armies" were on hand leading up to the film's Dec. 17 release.

Comic Con has now expanded outside the confines of the Javitz Center with a new city-wide festival called Super Week.

"We're taking it to the streets," Fensterman told CBS News. "For a full week, all over the boroughs of New York there's 120 events happening with a whole focus on geek culture...It's an awesome experience no matter what type of geekdom you worship."

And starting Tuesday? The planning begins all over again. Fensterman and the rest of the Comic Con team will start plotting New York Comic Con 2015.