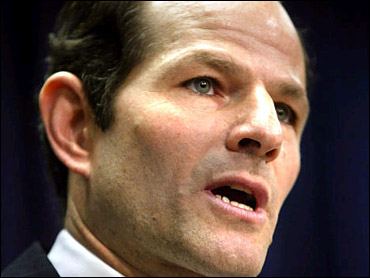 They are accused of an accounting scheme that made AIG's financial picture appear brighter than it was to investors and regulators.

"The irony of this case is that AIG was a well-run and profitable company that didn't need to cheat," Spitzer said. "And yet, the former top management routinely and persistently resorted to deception and fraud in an apparent effort to improve the company's financial results."

Meanwhile, a grand jury is probing potentially criminal conduct by individuals at AIG, including former top management, according to sources quoted in The New York Times and The Wall Street Journal.

Spitzer and his staff have refused to confirm or deny that a grand jury is dealing with the case.

Greenberg, 80, resigned as chief executive officer and chairman of AIG in March, ending nearly 40 years at the helm of the insurance company. Smith was fired about a week later for failing to cooperate with investigators.

Called to testify last month before Spitzer's staff, representatives from the Securities and Exchange Commission and lawyers from the New York state insurance department, Greenberg claimed his Fifth Amendment rights against self-incrimination, saying he had not been given access to AIG documents he needed for his defense.

State Insurance Superintendent Howard Mills said that the complaint "includes compelling evidence that investors and regulators were misled over an extended period of time."

He added: "Having said that, however, I believe AIG's current management team has taken steps to restore the company's credibility."

Greenberg was replaced as CEO by Martin J. Sullivan, 50, who had served as vice chairman and co-chief operating officer. When named in mid-March to the post, he became just the third man to hold the post since AIG's founding in 1919.

Sullivan and his new management team have been working to prepare the company's annual report for 2004 and make previously announced accounting adjustments that will cut AIG's value by some $2.7 billion. The report is expected to be released Tuesday.

Spitzer and Mills accuse Greenberg of "personally" conceiving and negotiating two "sham transactions with offshore reinsurers to create the appearance of insurance reserves where none existed," according to Spitzer's statement.

AIG is also accused of understating losses from an automobile warranty unit by transferring the losses to an offshore subsidiary.

"Company officials repeatedly lied to state regulators about AIG's ties to this and other offshore entities," according to Spitzer's statement.

The company is also accused of covering up losses in a Brazilian subsidiary by linking those losses to a Taiwan-based subsidiary that had been hit by damage claims from a typhoon and of creating "false underwriting income" through transactions to buy life insurance policies from dying people, Spitzer stated.

The state officials also accuse the company of fraudulently reducing its tax liability.