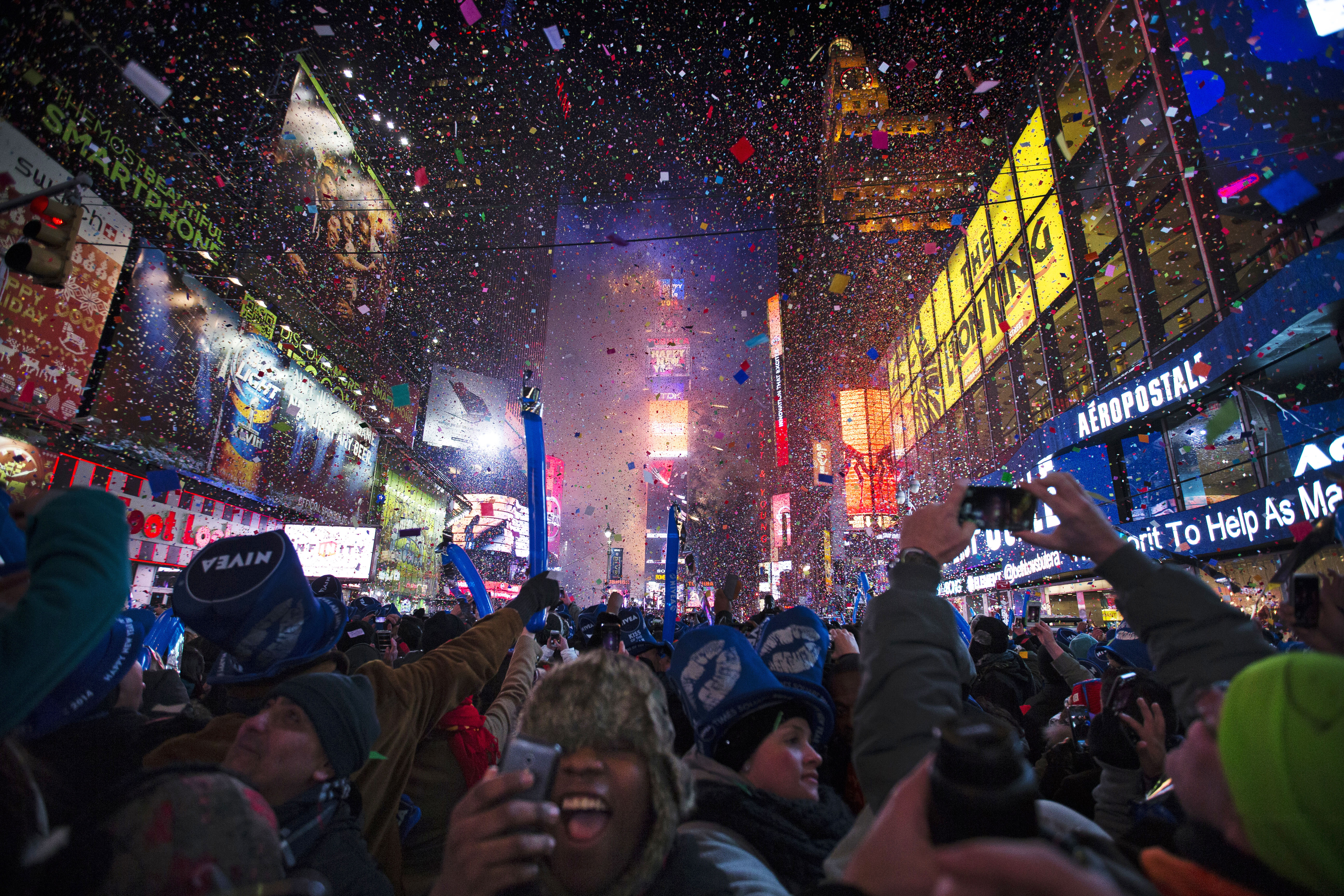 NEW YORK -- A sea of horn-tooting, hat-wearing revelers cheered and some even kissed as the famed crystal ball dropped in a freezing New York City's Times Square to ring in 2014, capping a world-wide wave of celebrations that included a dazzling 30-minute fireworks show in Dubai and a deluge of confetti in London that tasted as good as it looked.

Bronx-born U.S. Supreme Court Justice Sonia Sotomayor led the 60-second countdown and pushed the button that unleashed the shimmering orb with 2,688 crystals, a role usually filled by the New York City mayor. Mayor Michael Bloomberg, on his last day in office, was sitting the celebration out after 12 years on the job, while newly elected Mayor Bill de Blasio took the oath of office just after midnight at his Brooklyn home.

Kerrie McConaghy, 20, a university student visiting Times Square from Armagh, Ireland, was dancing and jumping up and down, donning a big blue top hat.

"It's unbelievable here," she said. "The lights, seeing the ball, hearing the music, all the people. It's amazing."

"TV doesn't do this justice," she said. "You have to be here to believe it."

Marcus Ix, 34, visiting from Germany, gave his wife, Sabrina, a big kiss when the ball dropped and confetti rained down.

"This is the best New Year's Eve of my life," he said as the crowd erupted with cheers and cries of "Happy New Year!" ''It was worth the 13-hour wait in the cold."

The annual New York celebration, which this year featured performances from artists such as Miley Cyrus, Macklemore & Ryan Lewis and Blondie, has become part endurance sport because post-Sept. 11, 2001 security measures force spectators into pens at least 12 hours in advance, with no food, warmth or bathrooms.

"We've got adult diapers. We're wearing them right now," said 14-year-old Amber Woods, who came with friends from New York City's suburbs to experience the event for the first time. They entered their corral at 10 a.m. Tuesday. For nourishment, they brought lollipops and popcorn. For the cold, they did a lot of jumping in place.

On the other side of the Atlantic, London welcomed 2014 with a mixture of futuristic fireworks and torch-lit tradition. The city's mayor said this year's explosive display came packed with peach-flavored snow, edible banana confetti and orange-scented bubbles. The evening also included scratch-and-sniff programs, LED wristbands and fruit-flavored sweets.

In Russia, where two suicide bombings in two days killed 34 people, eerily empty buses lumbered through the streets of Volgograd, where authorities canceled mass events for New Year's Eve and asked residents not to set off fireworks.

President Vladimir Putin, in his New Year's Eve address to the nation, vowed that the fight against terrorists will continue "until their destruction is complete," Russian news agencies reported.

In Dubai, a Persian Gulf city known for glitz, glamor and over-the-top achievements like the world's tallest skyscraper, officials sought to break another record by creating the largest fireworks show.

The Dubai skyline was a canvas for a dazzling 30-minute show. The display capped off with six minutes of fireworks that engulfed the city's man-made, palm-shaped island, with its fronds and trunk shimmering in thousands of lights. Organizers had promised that the fireworks would form a flying falcon, a sunrise and the United Arab Emirates flag.

In Ukraine, anti-government protesters hoped to set their own record for the most people to sing a national anthem at the same time. On Kiev's main square, at least 100,000 Ukrainians sang their national anthem in a sign of support for integration with Europe. The square has been the scene of massive pro-European protests for more than a month, triggered by President Viktor Yanukovych's decision to ditch a key deal with the European Union.

More than 260 people were injured by firecracker blasts and celebratory gunfire in the Philippines, a nation marking the end of a year of tragic disasters, including a Nov. 8 typhoon that left more than 6,100 dead and nearly 1,800 missing.

"Many here are welcoming the new year after losing their mothers, fathers, siblings and children so you can imagine how it feels," said village chief Maria Rosario Bactol of the Anibong community in Tacloban, the city worst hit by Typhoon Haiyan. "I tell them to face the reality, to move on and stand up, but I know it will never be easy."

In Sydney, Australia, there was a fireworks display that sprayed from the sails of the Sydney Opera House and the city's harbor bridge.

"It filled up the whole sky," said Mona Rucek, a 28-year-old tourist from Munich, Germany.

Closer to the International Dateline, New Zealand concluded 2013 with its own fireworks that erupted from Auckland's Sky Tower while cheering crowds danced in the streets of the South Pacific island nation's largest city.

In Tokyo, five priests at the Zojoji temple used ropes to swing a wooden pole against a large bell, sounding the first of 108 gongs to mark the new year. Simultaneously, "2014" lit up in white lights on the modern Tokyo Tower in the background.

Juji Muto said he was curious to hear how the bell sounded. The 75-year-old retiree said he wishes every year for good health.

China had light shows at part of the Great Wall near Beijing and at the Bund waterfront in Shanghai. The city of Wuhan in central Hubei province called off its fireworks show and banned fireworks downtown to avoid worsening its smog.

Pope Francis used his year-end prayer service of thanksgiving to urge people to ask themselves: Did they spend 2013 to further their own interests or to help others?

The pontiff asked people to reflect if they used the past year to make the places where they live more livable and welcoming. Citing Rome as an example, Francis said the city is full of tourists, but also refugees.