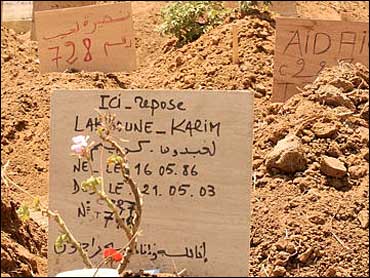 A powerful aftershock rocked an earthquake-ravaged area east of the capital Tuesday, killing at least three people, injuring 187 others and spreading panic as Algeria struggled to recover from a more devastating temblor.

The aftershock with a magnitude of 5.8 shook again shook areas east of Algiers in a zone that was hardest hit when a far more powerful quake struck the area last week.

It was the strongest aftershock so far from last Wednesday's quake, and it collapsed at least one home in the devastated town of Boumerdes, while guests fled an Algiers hotel amid fears of another disaster.

The May 21st quake killed at least 2,218 people and injured more than 9,000 others. There are no official figures on the number of missing. Since the quake, many residents have been living in the streets or in tents set up in parks, fearing aftershocks could topple unstable buildings.

With each day, anger has mounted at what survivors say is the slow government response. Townspeople have pelted visiting senior officials, even the president, with stones or debris.

Witnesses say the interior minister was so angered by jeers from survivors in one town that he threatened to withhold tents and other aid if protests continued. The government later apologized for that comment.

But the criticism has provided an opening for Muslim fundamentalists, despite efforts to squeeze them out by the military-backed government, which has battled armed Islamic radicals in a civil war since 1992.

"We want to take charge of families in this village for one or two years until they can be housed again," said Ahmed Houlim, a member of El-Islah oua El-Irched, an aid group run by a moderate Islamic party.

El-Islah set up tents for 13 families whose homes were left in ruins in Tidjelabine, a town of 10,000 near the quake's epicenter. Some Islah workers wore aprons with their party name and logo displayed on the back.

Houlim, who was overseeing the building of toilets in the camp, said Islah teams were in all quake-hit areas, including hard-hit areas such as Boumerdes and Zemmouri.

"We are much better organized than the state," he said. "When there are elections, local or presidential, there are candidates in our organization and if people want to vote for them, they should."

But some residents said they objected to attempts to use their hardship for political gain.

Just across from the camp, in a school courtyard, dozens of people lined up for biscuits, water and sugar at a distribution center run by local authorities, who are under the control of the local mayor - a member of the ruling National Liberation Front.

The Islah activists "are doing it for political interest, that's not good," Rasaid Azem, the center's manager, said.

He dismissed accusations the government and the authorities have done too little too late to help quake victims.

"Everything is now under control, we have all the necessary items," he said, as a truck packed with dozens of brand new mattresses pulled in. "You must not listen to stricken people outside who say they have nothing, it's not true."

The government has grown jittery over Muslim groups that excelled in providing aid - and winning gratitude - during the November 2001 flooding in Algiers that killed more than 700 people.

Fearful that fundamentalists could turn that gratitude into political power, the government issued a warning on Monday against "irregular" collection and distribution of donations for quake victims. The government lumps such groups with Islamic insurgents it has been fighting since 1992; 120,000 people have died in those conflicts.

El-Islah is a government-recognized group and not legally a target of the warning.

Tensions over the recovery and relief effort bubbled to the surface Monday, when Interior Minister Yazid Noureddine Zerhouni was greeted during a visit to Bordj El Kiffan with cries of "police state, dictatorship" and "Leave. We don't need you," the newspaper Le Matin reported.

Witnesses said the minister apparently lost his temper and threatened to withhold aid.

"He poked me in the chest and told me: 'There will be neither tents nor any other kind of aid for you if you're going to riot," said Abderrahmane Khodja, the head of a residents' committee in an apartment complex that collapsed, leaving 150 families homeless.

"We are victims of an earthquake," said Djamel Zidi, a 39-year-old teacher, his voice rising in anger. "We haven't time for politics."