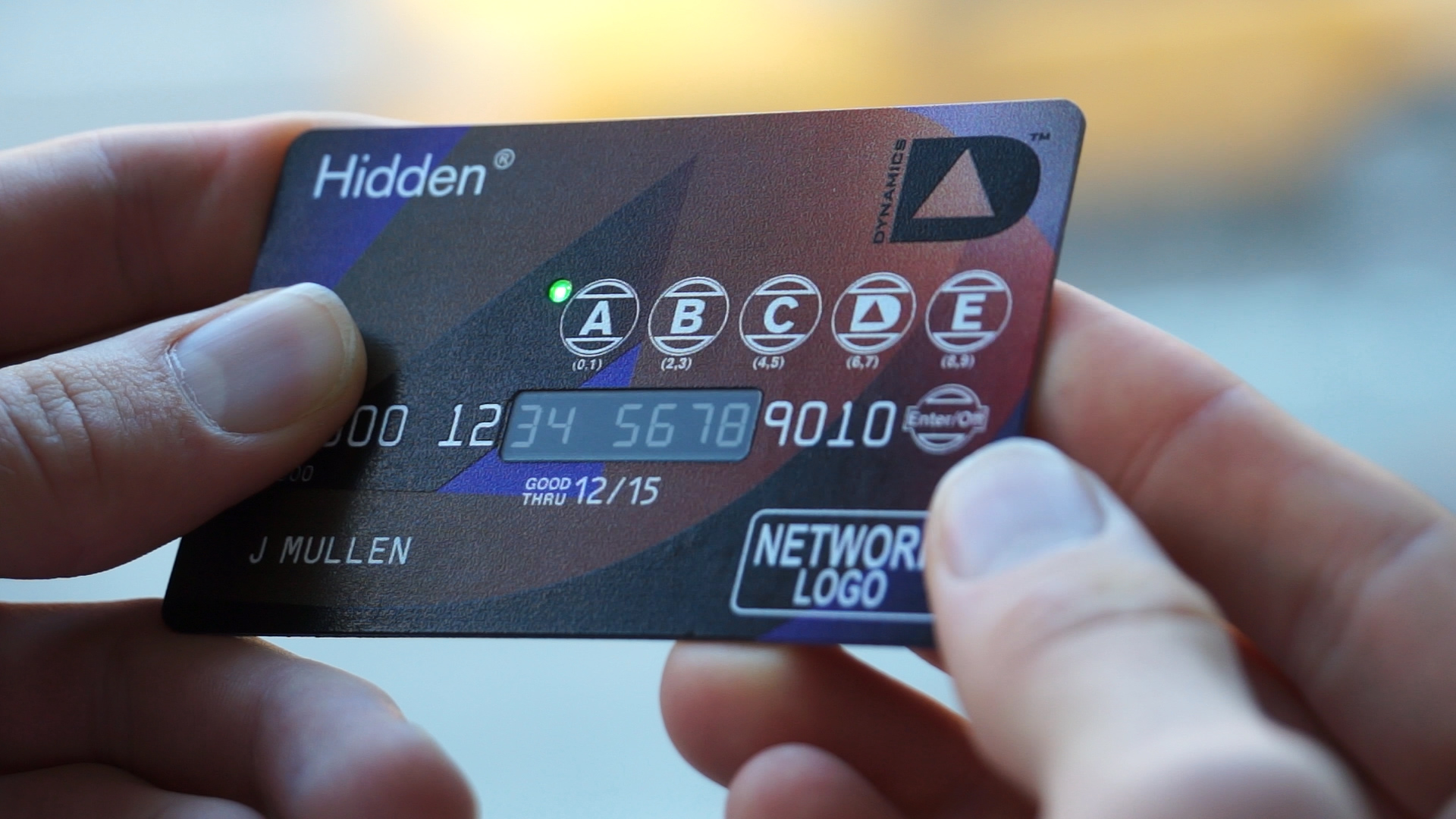 Consumers are tired of credit card breaches - and so's the credit card industry. But Dynamics, a developer of next generation credit cards, will soon be out with a high-tech solution: a card with its own keypad.

"Dynamics has the technology where it can essentially eradicate credit card fraud," Jeff Mullen, the Pittsburgh-based company's founder and CEO, told CBS News.

That technology is the company's new "Hidden" card, and while it's most likely impossible to eliminate credit card fraud in its entirety, the slim, security-oriented product could certainly make a dent.

The middle six digits of the card's number appear as a small blank screen. Enter your personal code into the five buttons on the card's face, hit "enter," and the full credit card number is revealed. The right combination also activates the card's magnetic stripe, so it can be used with regular credit card readers. No code -- no numbers, no data on the stripe -- essentially, no card.

"So if you lose the card, or the card's stolen, it's irrelevant," Mullen said. "It's a dead piece of plastic."

But most thieves aren't after your physical credit card. They want your card's information, and they get it through hacking stores, as they did with Target last year.

"That's a pretty common way to have your card data stolen -- with skimming machines that are on top of point-of-sale readers, and they're very hard to detect," said Avivah Litan, who specializes in fraud detection and prevention for Gartner Research, an information technology advisory company.

This card's answer? Change the information, constantly. The card generates a unique code for each transaction. New swipe, new code on the stripe.

"Every time you swipe the card, there's a different dynamic code that's written onto that mag stripe that's unique for that purchase," Mullen said. "So if someone does skim and steal your credit card number from, for example, a merchant breach, they cannot use that to make another transaction, because they do not know what that next code is."

The card does the same thing for its three-digit security number -- the one often asked for in online purchases -- offering some added protection should your favorite web-market get hacked.

Thieves have found ways to adapt to many security innovations. But Mullen is confident his product will fare better than the standard credit card.

"This is a computer technology," Mullen said. "And so we can adapt back."

The card packs a lot of tech into a little space. According to Mullen, a credit card is 33 thousandths of an inch, while his card's entire electronic assembly is less than 14 thousandths of an inch -- less than half the thickness of the card. Even with the circuitry, the card is still flexible, able to be bent by hand, or stuffed in a back pocket.

And as Mullen showed by dunking his product in a glass of water, it will make it through the an accidental run in the wash. The company says its battery will last four years; its cards expire after three years.

The company plans to release the card to the public this summer for free, a cost Mullen said card-issuers are willing to swallow because, when fraud happens, they usually get stuck with the bill.

Free or not, will the swipe-and-go modern consumer accept the added steps?

"It's not as convenient as what we have today but I think consumers are at a point where they want to do something extra if they know they're going to get security in return," Litan said.

There are other technologies being considered, from mobile phone payments to the chip-and-pin system largely used outside the United States. But many of the new methods involve upgrading the country's more than 15 million readers, which will take time, and cost billions.

What his company offers, Mullen argues, is a way to secure the cards without upgrading the readers.

But is there a code for getting out of credit card debt?

Jennifer Leach, a consumer education specialist with the Federal Trade Commission, talks to CBS News Reporter Paula Reid about keeping your identity and your money safe during the holiday season
More
Alexander Trowbridge