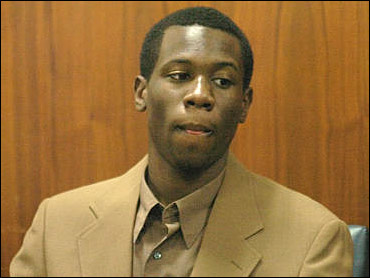 Lionel Tate, who was given a second chance after he beat and stomped a little girl to death when he was 12, was back behind bars Tuesday — exactly as some juvenile-justice experts had warned might happen.

Tate, now 18, was charged Tuesday with holding up a pizza delivery man at gunpoint at a friend's apartment.

"We had a real chance. The right thing would have been to get this young man some help," said Michael Brannon, a forensic psychologist appointed by a judge to examine Tate after the 1999 killing of 6-year-old Tiffany Eunick.

Tate made international headlines in 2001 - and touched off a debate over Florida's practice of prosecuting juveniles as adults - when he became the youngest person in modern U.S. history to be sentenced to life in prison.

"I think they got the wrong guy," Tate's attorney, Jim Lewis, told The Miami Herald for Wednesday's editions. "Lionel told me he did not do this. ... He said he got there when it was all over."

Kathleen Grossett-Tate, Tate's mother and a Florida Highway Patrol trooper, told the newspaper that her son is innocent and that she will stand by him as she did during the murder case.

The hulking, 160-pound boy had claimed at first that he killed the girl while imitating pro wrestling moves he had seen on television, then later said he accidentally hurt Tiffany when he jumped on her from a staircase.

His conviction and sentence were overturned on appeal in 2004 — after he had served three years in prison — and prosecutors gave him a plea bargain that that placed him under house arrest for a year, followed by probation for 10 years.

Now, Tate again faces the possibility of a long stretch in prison, especially since a judge last October said he would have "zero tolerance" for probation violations after Tate was caught with a knife blocks from his home late at night.

Katherine Federle, director of the Justice for Children Project at Ohio State University, said that by the time Tate got out of prison, it may have been too late to save him.

"Juvenile court systems and adult court systems have become extremely punitive," Federle said. "One reason is that it's politically easy to do that. But once we set off down that path, I don't know if there was ever any chance to rescue Lionel."

Back in 1999, Brannon examined Tate just after his arrest and concluded that while the boy did not suffer from mental illness or retardation, he had "a high potential for violence" along with "uncontrolled feelings of anger, resentment and poor impulse control."

Brannon, who works at the Institute for Behavioral Sciences and the Law in Fort Lauderdale, recommended that instead of being sent to prison, Tate be placed in a juvenile treatment center and get intensive counseling.

Instead, the boy was prosecuted and convicted as an adult on first-degree murder charges and received the mandatory life sentence prescribed under a new, tough-on-crime Florida law.

Bishop Thomas Masters, a minister and juvenile justice advocate, said that "it's very hard to come back to society" even for adults who have gone to prison. Children, he said, have it far worse.

"A child is still a child," Masters said. "Because he commits a crime, that does not make him an adult overnight."

Tate, who has been been living with his mother, a Florida Highway Patrol trooper, was jailed without bail for a court appearance Wednesday. No one answered the door at the apartment Tuesday.

Tate was also charged with forcing his way into the friend's apartment and roughly shoving the boy aside.