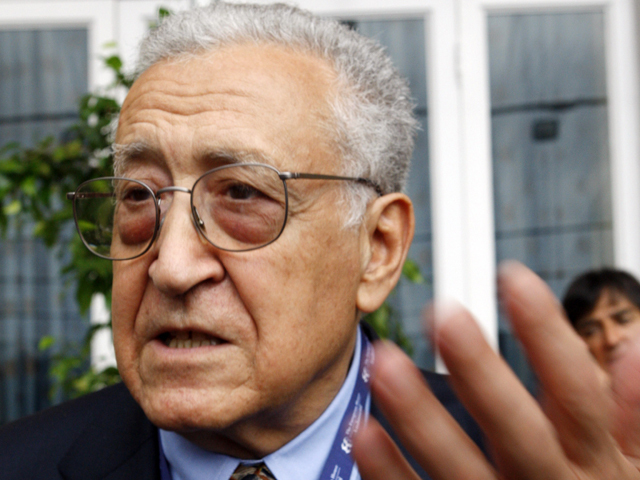 (AP) UNITED NATIONS - After two decades as a diplomatic troubleshooter in hotspots from Afghanistan to Iraq, Lakhdar Brahimi firmly believes that every conflict can be solved.

That conviction will be put to the test in his new job as the joint United Nations-Arab League special envoy charged with trying to succeed where his former boss Kofi Annan failed — bringing an end to the 18-month conflict in Syria.

"I think his biggest challenge is convincing the international community to intervene and end this — whatever it takes, because non-intervention has a much higher cost than intervention," Nadim Shehadi, a Middle East expert at London's Chatham House think tank, said in a telephone interview Friday. "Leaving this to go on is going to create more sectarianism, more extremism and more spillover to the region, and the Assad regime is capable of anything to stay in power."

Brahimi brings a unique background and a wealth of experience to a task that many leaders and pundits have written off as impossible.

He was a freedom fighter in his native Algeria, drifted into diplomacy after his country's independence from France in 1962, became undersecretary-general of the Arab League from 1984-1991, and returned to Algeria as foreign minister from 1991-1993.

In 1994, Brahimi took his diplomatic skills to the United Nations, taking on key assignments in South Africa, Haiti, Afghanistan during and after the Taliban rule, and Iraq after Saddam Hussein's ouster. He chaired a panel that examined U.N. failures in Rwanda's genocide and the massacre at Srebrenica during the Bosnian war, and recommended a major overhaul of U.N. peacemaking efforts and peacekeeping operations.

Reflecting on his 20 years spent trying to make peace, Brahimi acknowledged in a speech in 2010 that conflicts are terrible and difficult and the cause or the result of problems that need to be solved.

Nonetheless, he added, "I still believe very, very strongly that there is no conflict that cannot be solved."

"We, people, make these problems," Brahimi told the Skoll World Forum on Social Entrepreneurship in Oxford, England. "And we should be able to solve them. We can solve them."

Brahimi said he also learned that in dealing with conflicts "obviously you see a lot of wickedness, a lot of cruelty, a lot of injustice, but you also come across a lot of kindness, a lot of courage, and a lot of forgiveness, and that makes up for it."

He recalled that when former U.S. Senator George Mitchell accepted the job as President Barack Obama's special envoy to the Middle East in 2009, Mitchell said, "you live 800 days of frustration for one day of satisfaction."

During his years at the Arab League, Brahimi served as the organization's special envoy trying to mediate an end to Lebanon's civil war. There were several failed attempts to end the fighting, he said, but finally on Sept. 24, 1989, "we clinched a cease-fire" that looked like it would hold — and it did, leading to the Taif agreement that ended the 15-year conflict.

"These kinds of satisfactions are the things that one works for," Brahimi said.

Brahimi officially retired in 2005, though he remains active as a lecturer and participant in several non-profit organizations focusing on global affairs. He has taken on special assignments including heading a U.N. panel that investigated the December 2007 bombing of U.N. headquarters in Algiers. He is also a member of The Elders, the international group of prominent statesmen founded by Nelson Mandela that has been speaking out on major issues.

Now 78, the tall, grey-haired diplomat will be stepping into the job held by Annan, a close friend who as U.N. secretary-general sent him to Afghanistan twice, then to Iraq, and then brought him to New York as a special adviser and undersecretary-general in 2004-2005.

Brahimi knows the Mideast and its key players well and speaks Arabic, French and English fluently.

His years spent trying to end Lebanon's civil war put him in close contact with Syria, which for years maintained a strong military presence in Lebanon even though the Taif agreement called for an eventual withdrawal of Syrian forces. Brahimi was also in a key Arab League position when Syria made its dramatic decision in 1990 to participate in the U.S.-led coalition that routed Saddam Hussein's forces from Kuwait in the first Gulf War.

Shehadi, of the Chatham House think tank, said Brahimi's past dealings with the ruling Assad family in Syria in the 1980s means "they won't be able to fool him" as they did others with "games" to try to gain time and make the regime look good.

Shehadi said a diplomatic solution must come from the West, not an internal Syrian dialogue that is part of Annan's six-point peace plan, "and the best possible scenario would be an international agreement which would involve the Russians, who would step in and tell Assad clearly that the game is over."

Brahimi gave some clues on how he might try to end the intensifying Syria conflict in the 2010 speech, in which he stressed the importance of trying to find common ground between the parties — and "there is always a little bit of common ground, even if it's a few inches" — and then looking for larger areas of agreement that can lead to an end of the conflict.

In Afghanistan, he played a major role in installing a new government following the rout of the Taliban by U.S.-led forces in 2001. He co-chaired the first U.N.-sponsored meeting of world leaders and Afghan groups in Bonn, Germany that agreed on a blueprint for a political transition — a possible model for Syria if Bashar Assad falls from power.

In Iraq, he also helped choose an interim government in 2004.

Brahimi has stressed repeatedly that every conflict is different.

Last week, he gave another clue about what needs to be done in Syria.

The Elders issued a statement urging all parties in Syria, and all those in the international community who can influence the outcome of the crisis, to work together toward a Syrian-led solution to end the bloodshed "and move the country away from the abyss."

Brahimi added his own statement calling on Syrians to come together "in the quest of a new formula" so they can live together peacefully without fear or reprisals. And he urged world and regional leaders to end their divisions and unite to ensure that a political transition can take place as soon as possible.

He reiterated in an interview with The Associated Press in Paris on Friday that "the first challenge is to see the killing stop."

Asked whether military intervention is on the horizon, he said, "I hope not."

"I am a mediator," Brahimi stressed. "Speaking of the military option is already recognizing failure."