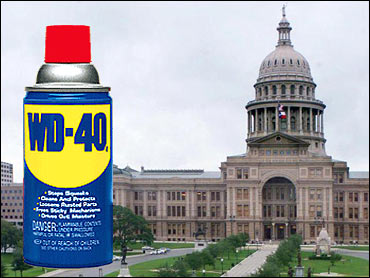 The makers of the lubricant WD-40 are objecting to some Texas lawmakers calling themselves "the WD-40s" - a name they say describes them because they're white Democrats over 40.

The group entered the spotlight two weeks ago when they were among 51 Democrats who fled Texas to Ardmore, Okla., in protest of a Republican-pushed congressional redistricting bill. Republicans hold the majority in the state Legislature.

"It is extremely important to WD-40 Company that its trademark not be associated with any political party or political group," attorney Kathleen Pasulka, representing the company, said in a cease-and-desist letter to the leaders of the so-called WD-40s.

"Your use of 'WD-40' as your caucus logo or as the trademark of your group of 'Anglo, male, Democrats over 40' dilutes WD-40 Company's trademark rights and in addition may lead the public to believe that WD-40 Company has given you permission to use their name," Pasulka told Reps. Chuck Hopson, D-Jacksonville, and Mark Homer, D-Paris.

On Saturday, the lawmakers got some support from three legislators who sent Pasulka a response squeaking with humor and sarcasm.

The trio said they're "appalled and offended that you and your client, The WD-40 Company, would recklessly inject the issue of race in your letter. We were not aware that your client harbored reservations about doing business with Anglo white males over 40."

The letter, also sent to company president Gary O. Ridge, pointed out that Texas owns thousands of shares of WDFC stock worth millions in its state funds and that perhaps the stock could be sold to help with a $9.9 billion budget shortfall.

"We hope this letter clears the air as to any confusion you may have in this matter," it said.

In her letter, Pasulka said she understood that the use of the trademarked name "may be temporary and all in fun, and that you had no intention of doing anything that would harm WD-40 Company."

"But," she added, "I must insist that you cease referring to yourselves as the 'WD-40s' immediately and discourage any use by the press or others of this name."

Hopson said he and Homer responded with a short letter. "OK," it said.

Hopson, who wears a pin of the familiar yellow and blue can on his suit lapel, said he never intended to infringe on the trademark of a product that he and his East Texas constituents so enjoy.