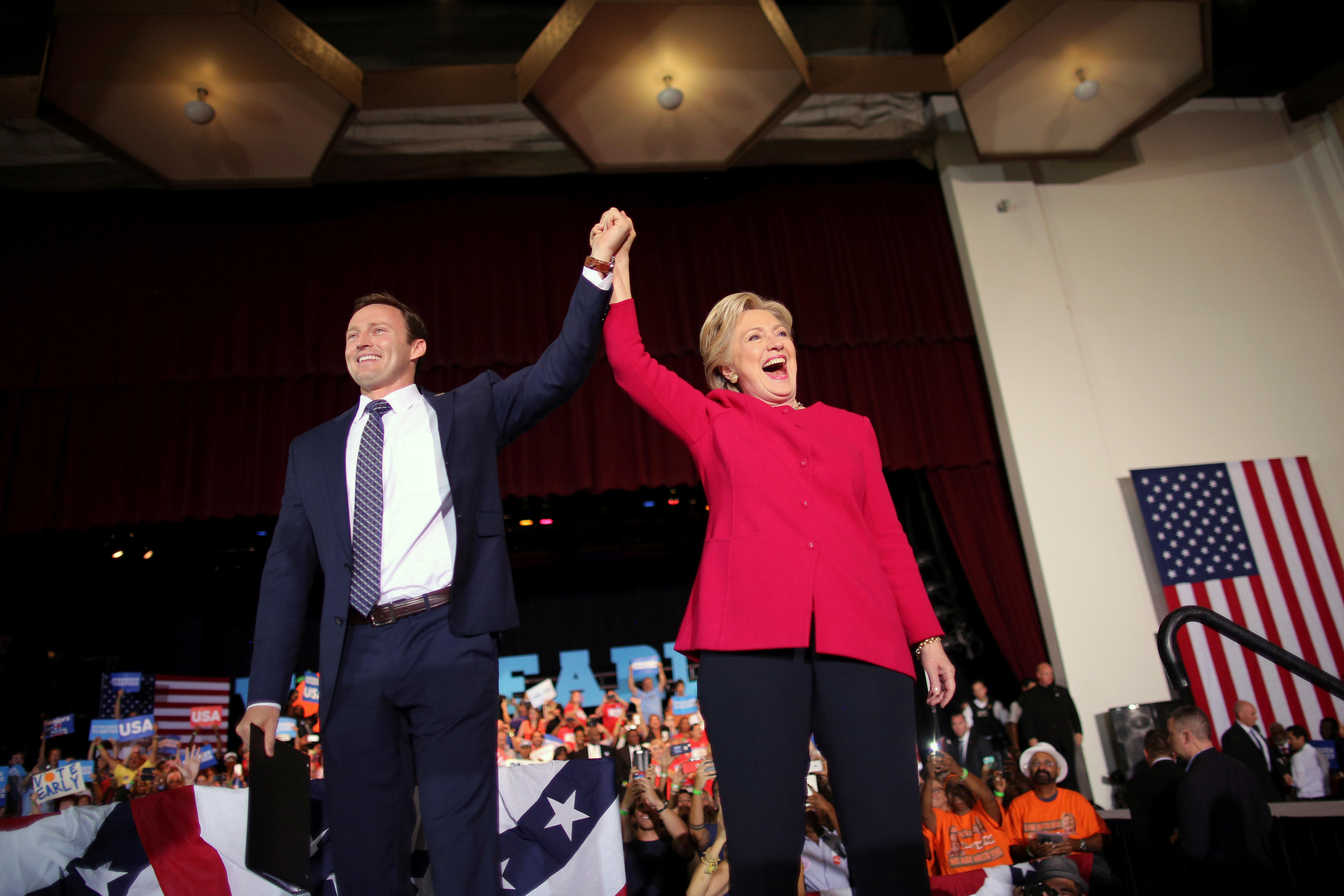 “Hillary, number one!” says Andy Santiago, who moved to Florida from Puerto Rico nine months ago in search of a job. He gives a thumbs-up with his left hand, stuck in a latex food-preparation glove, and keeps his right hand on the bulky sandwich roll he is loading with cheese and meat at Piocos Chicken.

Santiago does not speak the language well enough to detail his political views in English, so he repeats himself: “Hillary, number one!”

With the island’s debt crisis driving down job opportunities and driving up crime, the number of Puerto Ricans moving to the Florida -- and the Kissimmee area specifically -- is on the rise. And it’s a group that could decide who wins this crucial battleground state come Election Day.

Piocos Chicken, affixed with red booths and framed photos of Puerto Rico dating back to the 1940s, is a hub for Puerto Ricans in Kissimmee. And right now, that means it’s buzzing with political activity.

Edgar Pena, a 28-year-old Floridian of Puerto Rican descent, is the manager. His parents moved to Florida for a better life and he grew up enmeshed in the Puerto Rican community of Kissimmee.

Pena didn’t vote in 2008 or 2012, but feels this time is different: “I would rather vote. Just the fact that I feel like I will make a difference to insure that Trump isn’t the one to go into the White House.”

About 1,000 Puerto Ricans families are relocating to Florida each month, according to the Puerto Rico Federal Affairs Administration. Osceola County, home to Orlando and Kissimmee, is more than 50 percent Latino, up from 45 percent in 2010, and many of those newcomers are Puerto Rican.

As U.S. citizens, Puerto Ricans are eligible to vote in the presidential election the minute they get to the U.S. This makes the greater Orlando area a target-rich environment for campaigners for both Clinton and Trump.

Puerto Ricans also tend to vote in greater numbers than the average American, with normal turnout on the island close to 75 percent among eligible voters. Puerto Ricans also typically lean left, and President Obama easily carried the voting bloc in 2008 and 2012.

Yet Puerto Ricans who’ve just move to the mainland don’t always register that way or see a need to identify with either party. In Florida, that means they often wind up registering as “NPA,” or No Party Affiliation.

“The number one the reason that they came here and register as NPA is because there are a different set of political parties on the island,” explains Vivian Janner, the Osceloa County commission chairwoman, who is Puerto Rican herself.

In 2016, about 20,000 new voters registered in Osceola County, and 11,500 of them were Hispanic. This large group of new Hispanic voters greatly favored the Democrats, with about 51 percent of them registering Democratic, 42 percent registering NPA, and 7 percent registering Republican, according to analysis from Daniel Smith, a political science professor and empirical researcher.

Johanna Mercedes, who moved to the U.S. from Puerto Rico when she was 25 years old in an effort to give her daughter a better life, is one NPA voter who says she is voting for Clinton.

“I have never been either one,” Mercedes, an assistant manager at a hospital, says of the Democratic and Republican parties. “I just listen to what they have to say and vote on what they are saying.”

She gives two reasons why she’ll be voting Democratic this year: Clinton’s experience and Trump’s rhetoric.

Lilliana Lauraeno, another NPA Puerto Rican, moved to Florida when she was 9 years old. She has lived through the demographic shift in Kissimmee and, now engaged to a Colombian Floridian, she feels a part of the greater Latino community.

“Even though we are Puerto Rican and we are not immigrants we still feel for those who come here for a better life and we do not feel they should be alienated,” she said. “And we moved here 20 years ago this area had very, very few Latinos. I was the only girl in my class when I moved here who spoke Spanish. So I have seen the progression to what it is now.”

Still she is worried about the quiet Trump supporters -- the ones who do not voice their opinions publicly but show them on Facebook. Little does she know that one of the hushed Trump Puerto Rican supporters is sitting at a booth at Piocos, just a few feet from her.

Pedro Rose is a 28-year-old pool cleaner who comes to Piocos Chicken every day. He is registered to vote -- though he is not sure which party he is registered with -- and he likes the way Trump talks.

Rose had to leave Puerto Rico because he could not find a job, and he takes issue with Obama for not doing enough to aid the island during its economic meltdown.

“Without a job you can’t live,” Rose says. “[Trump] talks too rough sometimes but he talks the truth. That’s what I like about him.”

When Floridian Republicans go door knocking in the Orlando they are targeting voters, Republicans and Democrats alike, who want change. Carmen Rios, a 67-year old Puerto Rican volunteer nurse, lives in an Orlando community is one of those voters. She voted for Obama in 2008 and 2012 but now she is on Trump’s side.

“A lot of people just say he is talking badly about borders. But I think he is going to plan on doing a lot of good stuff, I hope,” says Rios.

Yet many Puerto Ricans who are new to the U.S. feel that their identity as a part of the greater Latino community outweighs what Trump can offer. That is also true for Puerto Ricans who have lived in the US for decades.

“It would be war,” says Carmen Goller, an 83-year-old Puerto Rican, of a Trump win. “The way he treats us -- We have to be stronger together. Here in this house I have different races. That is what we are. We have got to get together.”