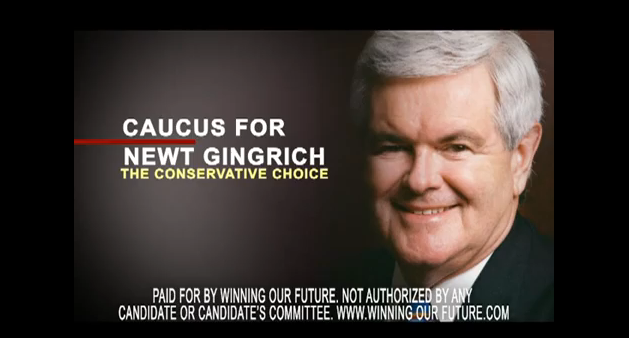 A new pro-Newt Gingrich ad airing in Iowa is warning voters not to let the "liberal Republican establishment pick" the GOP presidential candidate - emphasizing that conservatives need "someone who's fought for us."

The ad, released by the pro-Gingrich super PAC Winning Our Future, will air in Iowa starting Wednesday and will run on broadcast and cable throughout the state until January 2 - the day before the Iowa caucuses. According to Winning Our Future, the ad buy was worth $250,000.

The thirty-second spot touts Gingrich's conservative credentials, and accuses the Republican establishment of "attacking him with falsehoods."

"The Republican establishment wants to pick our candidate," the ad's narrator intones. "When a principle conservative took the lead they outspent Newt Gingrich 20 to 1, attacking him with falsehoods."

"Conservatives need someone who's fought for us," it continues. "Newt balanced the federal budget, reformed welfare, cut taxes and created 11 million new jobs. Newt will take on radical judges, and fight against abortion. Don't let the liberal Republican establishment pick our candidate. "

Super PACs can spend unlimited funds to support a candidate as long as they do not directly coordinate with the candidate's campaign. The first pro-Gingrich super PAC, "Solutions 2012," began operating last month.